In 1995, media mogul Ted Turner decided to run a wrestling show to combat Vince McMahon’s WWE (which was then called the WWF). Eric Bischoff, a wrestling fan and capable producer took Turner’s vision and revolutionized the business.

The Monday Night War DVD released yesterday in Canada, is a documentary on the war between WCW’s Monday Nitro and the WWE’s Monday Night Raw programs. For any fan who tuned in shortly after the “war” had finished in 2001, this is a great DVD to get. It tells you everything from how it began, who was in charge and Vince’s personal feelings towards it. 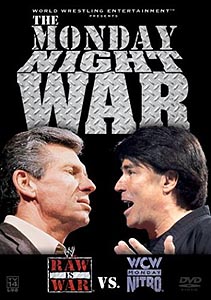 At first, it’s assumed that McMahon would re-write history on this DVD, the way he always does, but this is a very candid McMahon who admits it was the toughest time in his career. Shawn Michaels gives credit to Bischoff, saying that if the WWE were to discredit what Bischoff did and what WCW did then they’d be in denial. HBK also said that the WWF pretended they didn’t care but they were all very nervous because they didn’t know what was going to happen.

On WCW’s side of things, they brought the business to fruition with Nitro. It changed the way Vince and other organizations would do sports entertainment. Bischoff admits that he never owned WCW but to him…he did. He also admits that there were too many people in charge of the company. Some of the former WCW wrestlers go into how awful it was to work there near the end and how they wouldn’t know what they were doing until eight to ten minutes before the show would start. Bischoff disregarded Vince Russo and Ed Ferrero’s parts in the rise of WWE Raw but mentioned how they failed in the end with WCW.

For those fans who know the complete history of the war because they’ve been a fan from start to finish, this is nothing new. It’s the same story all over again. The only thing that long-time fans might find interesting are the personal takes and feelings towards some of the bigger moments. However, they don’t have much on the main players of the war. They barely talk to Austin. There’s nothing on Sting or Arn Anderson. They virtually have nothing on the Undertaker. They don’t bother to talk to anyone that was in the nWo, other then Bischoff. They don’t talk to Rey Mysterio Jr. about the other factions like the Latino World Order. They don’t talk to Steiner about the Wolfpack and how all the separated groups killed the concept. I believe it was Jericho that talked about how it got out of control until it got boring. They didn’t talk enough to Jericho about his debut which was a big step in Raw’s rise over Nitro. In a chapter called “Talent goes to WWE” they touch on it but not enough. When Jericho jumped it was the first time that WWE seemed like they were getting the upper hand on WCW because that was the feeling Bischoff had built up when former WWE stars would show up on Nitro.

This was exactly that. Just a glimpse at how the companies looked pre-war time and some thoughts from the stars about what they felt the difference was between then and now.

They talk a little about the drug trial, not too much even though that’s why most of the talent left.

Just a look at how the concept began between Bischoff and Ted Turner and what some of the wrestlers thought of it.

WWE wins a round

This was funny because Jericho reminds everyone that Bischoff went out on air and gloated about how WCW was “whatever number” and 0, then literally the next week…Raw won.

This was so emotional. Anyone that remembers that time and remembers that show they’ll remember that Ric was brought to real tears that night and everything was very real on TV. The atmosphere was so thick you could cut it with a knife. This was when Ric came back and Double A brought back the Horsemen with Benoit, Malenko and Mongo McMichael as the newest members.

Not all the chapters are explained because throughout they talk about the same stuff and the same people talk about their feelings. They talk about the infamous blunder by Bischoff who decided to tell the world that Mick was going to win the belt at Raw and it made everyone tune in. They have Mick’s take on it but they don’t show the match. This story has been talked about on Confidential, Axxess and media outlets not associated with the WWE. Why bring it up for the millionth time and still not show the actual match?

The extras were okay but had weird choices. First, they have Stone Cold & HBK versus Bulldog and Owen Hart. This match was great and of coarse anyone with a heart would love to see Bulldog and Hart again. The feud took up most of 1997 with the Hart Foundation against… well against pretty much everyone but mainly DX and Austin. However, there were better matches to put in to point that out. Instead of pointing the big feud out, it just seemed like a match they stuck in for sentimental reasons. Also, they have HHH & HBK versus the Legion of Doom. This was when DX and the new age of attitude stepped in to pick up Raw in the ratings. During this time period they had started pitting the old against the new. However, they never really get into that in the DVD. They talk about how Russo tried it in WCW but it failed, but they don’t mention that this match was about the new age of attitude fighting one of the biggest tag teams of yesteryear. Again, it just looks like a match they stuck in.

The extras have a little look at the feud between McMahon and Austin and McMahon’s “Bret Screwed Bret” interview. These are understandable since it was the “Montreal Screw Job” that made McMahon into a heel for the company. It was that incident that made wrestlers start airing their real life feelings on live air every Monday night. The Austin feud is really what turned Raw around and kept it going till WCW couldn’t catch up anymore.

For WCW matches they show, Benoit versus Booker T and Goldberg versus Hulk Hogan. Again, these were big important matches that were very exciting to watch, but there’s no background to them. They’re great but there could have been better choices in there. It was the Hart/Michaels feud on air and off that started the change in WWE, but they don’t show what happened to either of them. How they were injured and left the business or how they started the feud together in the beginning. Sting was the cornerstone of WCW for years and there was none of his matches on the DVD and only tidbits of his final match with Flair on the last Nitro. They have the last Nitro on the DVD extras but it’s not the show. It’s bits and pieces and the feelings of the stars. You’ve basically seen it on WWE Confidential. It was just amazing to watch Ric Flair stare into the camera and say, “I was happy to see it end.”

For everything the war did and all the stupid hellacious moments that the wrestlers went through on and off camera, this DVD doesn’t do it justice. It’s a great historical tale of the feud but nothing we didn’t already know. Like most of the WWE products, it was great but it could have been better. Again, McMahon’s not using all that footage archive to his advantage. The golden parts of the DVD are the Ric Flair moments where he goes through his leaving the WCW, his return and the final episode of Nitro with Sting. The most heart warming and interesting segment of the whole DVD is the Last Nitro on the Extras. It had surreal music to it to emphasize the surreal feelings of all the stars that were there that night. It doesn’t really make you think Nitro was great. It just makes you feel like you wish it was back.