Cornette wows the audience in Charlotte

CHARLOTTE – Call him a loudmouth. Call him a hothead. Call him a “momma’s boy.” But make sure you call Jim Cornette one entertaining son-of-a-gun who happens to be passionately devoted to pro wrestling.

In a riotous, often profane, 2-1/2 hour session, Cornette captivated 500 fans at the Mid-Atlantic Wrestling Legends Convention and Fanfest last weekend with over-the-top yarns from the road, insights into wrestling history, and barbs directed at some big names in the industry.

In fact, just about everyone who hung around until an enthusiastic but exhausted Cornette called it quits at 1 a.m. Sunday agreed that his freewheeling give-and-take represented the highlight of the convention.

“I could have listened to Jim all night and, believe me, he can talk all night,” said veteran women’s star “Sensational” Sherri Martel, who was Cornette’s first charge when he broke into the managerial ranks in Memphis more than two decades ago. 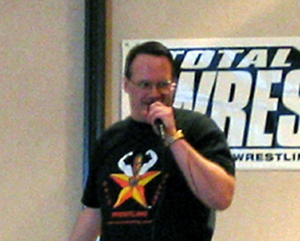 A sly Cornette was a hit with fans in Charlotte. Photo by Annie Johnson

Cornette was just as overjoyed to be at the convention, which attracted more than 1,000 mat enthusiasts from as far away as Japan. “If I’d known this was going to be like this, I’d have come earlier and stayed later,” said Cornette, a principal in Ohio Valley Wrestling, the Louisville-based developmental territory for the WWE.

The 42-year-old Cornette was particularly thrilled to return to Charlotte, saying he enjoyed his best years in the Mid-Atlantic region, especially during his stint as manager of the legendary Midnight Express team of Bobby Eaton and Stan Lane.

Only a bloody nose interrupted his non-stop one-liners, diatribes, and detailed analysis – Cornette was suffering from a cold, and antihistamines had dried out the inside of his nose. True to form, he quipped upon his return to the stage: “I’m so hardcore, I juice during a Q&A.”

Cornette got into wrestling as a teenager, taking pictures of the Memphis-based promotion shows in his hometown of Louisville. He slowly worked his way up the ladder, producing programs, doing ring announcing, and toting wrestlers’ attire, until Jerry Jarrett gave him a break as a manager for Martel at the ripe young age of 20.

Martel promptly was injured in a battle royal involving massive Stan “Plowboy” Frazier. “In two weeks, I managed to set her career back 15 years,” Cornette laughed.

But it didn’t take him long to find his stride as a whiny, rich “momma’s boy” armed at all times with a tennis racquet. The gimmick made sense – for years, fans watched his mother escort him to arenas because he was too young to have a driver’s license.

Before long, though, his role as a hapless screw-up evolved into that of a full-fledged villain who would wield the racquet wherever and whenever needed in defense of his protégés.

The racquet, Cornette said, “was hell” on the Rock ‘n’ Roll Express pairing of Robert Morton and Ricky Gibson, the years-long chief rival of the Midnight Express, especially before Lane replaced Dennis Condrey as one-half of Cornette’s team.

“Dennis would forget,” Cornette explained to the crowd. “Dennis would say, ‘Gimme me the racquet!’ I’d throw the racquet in – it’d have a horseshoe in it, a chain around it.

“Ricky Morton would be laying on his knees and Dennis would take that racquet and throw it over his head, and pow, right in the back! And Ricky’d go, ‘Uhhhhh!’

In addition to the protection afforded by the racquet, Cornette recalled that WCW star and booker Dusty Rhodes assigned to him as a “bodyguard” Big Bubba Rogers, also known as Ray “Big Bossman” Traylor.

But Rogers’ nearly invincible aura was severely tested one night in Atlanta when a cab driver inadvertently slammed a door on his hand.

“He smashed all his fingers,” Cornette remembered, squirming at the agony of the memory. But, as Cornette recalled, Rogers calmly told the cab driver, “Brother, you need to open that door.”

Once in the arena, Cornette quizzed his bodyguard. “Why didn’t you say more than you did?”

“There were fans there,” Rogers retorted. “Bubba don’t sell. I can’t put it over.”

Little wonder then, that Cornette loved the memories and the travel associated with the pro wrestling of a bygone era.

“It was fun. Nobody got hurt,” he said. “I’d get out to take a piss at a gas station, and have a Wendy’s cup with a lid on it.” Motioning on stage to Eaton, Cornette continued: “He’d tie a knot in the bottom of my straw. I’d get back in, I’d go to drink – I’d suck the top of my head in!”

That camaraderie – and fun – has been lost in today’s ultra-scripted wrestling, Cornette lamented. “Now everyone today is like, ‘Uh, we’ve got to go tonight and go over our spots … we want to take five hours to go over that seven-minute match.’

To Cornette, that’s symptomatic of a major problem in the business – the lack of places for young wrestlers to gain much-needed experience.

“Now guys who are in the business are getting thrust onto the national scene when they’ve only been doing it two or three or four years, and you can’t be expected to have the experience or the talent or the expertise.”

Plus, wrestlers abuse their bodies more than ever with daredevil moves because they lack the emotional expression of old school wrestling, and try to make up for it with spectacular stunts, he said.

“It scares me because I don’t want to go through 15 tables and 14 rolls of barbed wire,” he said.

Cornette’s dislike for that sort of wrestling was evident in his expletive-riddled tongue-lashing to parties such as former WCW booker Vince Russo, known for his love of “shock” television, WWE personality Paul Heyman, and the rapping/wrestling Insane Clown Posse entourage.

For instance, Cornette recalled getting Russo’s phone number through a third party, tearing into him in a brief conversation, then leaving a longer message on his answering machine about “the way he screwed up the business, the way he didn’t have any respect for anybody in the business.”

When the audience started an impromptu “Russo sucks” chant, Cornette shouted: “I hope somebody gets that on videotape – I’ll send to the [expletive deleted].”

As to Heyman, Cornette said the manager/promoter’s stint as head of ECW helped to legitimize the use of extreme in-ring action like barbed wire, fire, and tables. That, he said, has desensitized fans who have “seen it all.”

Later, he shouted down a Posse supporter amid wild audience cheers, even breaking out a line once used by WWE announcer Jerry Lawler – “your records weren’t released, they escaped.”

Before he departed for the night, Cornette acknowledged a tale of self-deprecation -a part of wrestling’s lore – of how he got in the face of a Dairy Queen worker one dreary night in Hyden, Ky. The incident was captured on videotape by a wrestler in the back of Cornette’s van, and has made the underground rounds for years.

“We ordered like $40 [worth of food]. It’s Dairy Queen, right? We’re waiting in this line, inching, inching … 20 minutes, we finally get up to the window, and hand out the money,” he said.

In an almost off-handed way, he offered to the window clerk: “Bet that’s your biggest order of the day.”

As he recalled, she said, “Yeah, it is. You really want it?”

“If we didn’t want it, we wouldn’t have ordered it,” he retorted.

“Well, we’ll start fixing it then,” she said. “We thought you were joking.”

A long, hungry night on the road … a snub at a Dairy Queen … before long, Cornette’s face was inside the drive-by window, unloading a double-barreled shotgun of profanity as he chose to make a point rather than eat.

“Now everybody’s got that tape,” he chuckled. “If I had the rights to it, I’d make more money than I did off Starrcade ’87.”