CHARLOTTE — In the end, Tully Blanchard was the last one to leave. After two days, over 25 wrestlers and thousands of fans later, the Mid-Atlantic Convention ended Sunday. Overwhelmed seemed to be the word used most often.

“I thought I would come and be bored for four hours,” said former wrestler Johnny Weaver, “but all I did was sign autographs for four hours.” 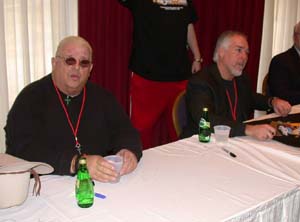 While the Super Bowl was on the mind of most in Charlotte, N.C., a Hilton Hotel within the city seemed to be in a different world. Those at the Hilton seemed to be clueless that the hometown Carolina Panthers were going into the biggest sporting event of the year in the U.S., as wrestling was the only sport talked about.

Organized by former Mid-Atlantic photographer Greg Price, the convention drew fans from New York, Texas, Florida and Japan. It seemed that locals were in the minority as most seemed to travel from out-of-state.

Fans had the opportunity to purchase merchandise from vendors and also get autographs from such stars as Dusty Rhodes, Ricky Steamboat, Arn Anderson, Ole Anderson, James J. Dillon and dozens more.

Also, fans were treated to different question and answer sessions with Ole Anderson and Jim Cornette.

Anderson, who has been promoting his new autobiography, continued to talk in the controversial manner that was started in his book during his session.

Cornette, who seems to be a staple in question and answer sessions for the last 10 years, shared road stories with Bobby Eaton, James J. Dillon and Les Thatcher, who all joined him onstage in front of 300 fans.

Reunions seem to bring together unusual pairings. One strange pairing included Dusty Rhodes and Tully Blanchard, bloody rivals in the ring, who signed autographs side by side.

Missing from the list of wrestlers who made it big in the Mid-Atlantic area were Ric Flair, Barry Windham, Nikita Koloff, Stan Lane and Dennis Condrey.

The Mid-Atlantic area, consisting of mostly the Carolinas and Virginia, was considered one of the biggest regional promotions in wrestling for 50 years. It ended when Jim Crockett Jr., the promoter, tried to push the Mid-Atlantic promotion national in the mid 1980s.

Florida and Richmond, Va., were two areas mentioned for the next reunion. Although it looks like it won’t happen for another year, fans were already discussing the possibilities of another one.

“I’m ready,” former Mid-Atlantic enhancement worker George South said. “Where do I sign up for that?”

But fans don’t have to wait long to meet their old favorites at various reunions. Wrestlecon in Arlington, Texas, is scheduled for this coming weekend with such names as Mick Foley, Missing Link and Baby Doll scheduled. Then on March 13, Totowa, N.J., will host Fan Slam with 15 names involved in the first Wrestlemania. And the Pro Wrestling Hall of Fame is having a dinner at Ilio DiPaulo’s Restaurant outside Buffalo in March, and its induction ceremony in May.

With the recent success of a Fan Slam event in the summer, WWE’s Ultimate Ric Flair Collection DVD and the Mid-Atlantic Convention this past weekend, wrestling will undoubtedly start showing off more of the past.