There is a definite theme to the home releases of Ring of Honor’s fall shows. Over the course of three months and six shows, purchasers of the set can see a NWA legend, a legendary tag team, a managerial legend, a Japanese legend, a hardcore legend and a match that is already the stuff of legends. 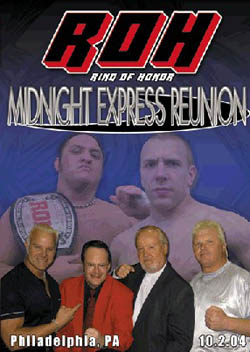 Hardcore Legend Mick Foley is the first legend to make an appearance, debuting with a killer promo and dubbing the promotion “Ring of Hardcore” on the Sept 11, 2004 “Glory by Honor 3.” While casual fans may pick up the disk to check out the former WWF Champion, the content of the show will draw them in. There are four stellar matches on the show, with the hysterically funny Alex Shelley facing Bryan Danielson, the continuation of the feud between CM Punk & Austin Aries, ROH Pure Champ John Walters against Nigel McGuinness and the World Title Match between Samoa Joe and UK superstar Doug Williams, who is considered one of the best technical wrestlers in the world today. The World Title match is a hard-hitting technical affair that leaves the viewer impressed with both men. The show is capped off by the “Ultimate Endurance Match” for the tag team championship, pitting champions Ricky Reyes and Rocky Romero against The Carnage Crew, Dan Maff & BJ Whitmer and Generation Next’s Roderick Strong & Jack Evans. It’s a fun match to cap off an enjoyable show.

Old school fans will find interest in the following show, October 2nd’s “Midnight Express Reunion” from Philadelphia. The show is titled for the first-time appearance of all three members of The Midnight Express: “Sweet” Stan Lane, “Beautiful” Bobby Eaton and “Loverboy” Dennis Condrey, as well as their manager Jim Cornette. The ceremony in their honor makes for some great moments, including a surprise guest and some old school moments that anyone who was a fan of the team will enjoy. The main event of Samoa Joe vs. Bryan Danielson is another in a great series of matches from both men, who had stellar years in 2004. Another legend, Ricky “The Dragon” Steamboat appears on the show leading John Walters, CM Punk, Ace Steel and Jimmy Jacobs against Generation Next. This show started the “Pure Wrestling vs. Hardcore” feud between Steamboat and Foley that was unfortunately cut short when Steamboat was hired by the WWE. While Steamboat has never been a strong promo man, he gets his point across well. Also enjoyable are Homicide vs. Nigel McGuinness and Low Ki vs. Jay Lethal, with Lethal’s Mom letting Ki know what she thinks about him.

Although still a good show, the weakest of the set is “ROH Gold” which commemorated the promotions 50th show. Considering the quality of the ROH product, that is hardly an insult. The show starts strong with Homicide vs. CM Punk but the rest of the show, while enjoyable, doesn’t jump out at you like many ROH shows. Some major storylines continued with this show, ROH collectors will want this in their collection, and it provides an entertaining three hours.

October 16th, 2004 in Chicago was a landmark event. The show is headlined by Samoa Joe vs. CM Punk, a rematch to their 60-minute draw in June. The match is so good, it was given five stars by Dave Meltzer — something he rarely gives to North American matches — and was within the top three of most match of the year polls. The bout is a clinic on what great wrestling is, and every up-and-coming wrestler should study this match to learn how to work a headlock and make it entertaining. The match builds slowly into a exciting climax and you can’t stop watching. While the show sells itself easily on the main event, the sick “I Quit Match” between Alex Shelley and Jimmy Jacobs, the tag match with Homicide & Rocky Romero against Jack Evans and Roderick Strong and the killer promo between Mick Foley and Ricky Steamboat that is truly Foley at his finest all add to the value. If you are a wrestling fan, you should see this show.

Rounding out the set is the November “Weekend of Thunder” shows. The first night is headlined by Japanese legend Jushin “Thunder” Liger against Bryan Danielson, while the second features Liger teaming with Samoa Joe against Danielson and Low Ki. Both matches are a lot of fun, and the atmosphere and excitment from the rabid crowds who are obviously thrilled to be seeing Liger live comes through loud and clear.

Night one also features another singles bout between CM Punk and Austin Aries that surpasses their first contest. Ricky Reyes & Rocky Romero defending the tag team titles against Jack Evans and Roderick Strong and Low Ki vs. Chad Collyer are also very good matches. The Ki vs Collyer match features a moment in commentary history by Jimmy Bower that is highly amusing. It should be noted that CM Punk does commentary on the Liger shows as well as Glory by Honor, while Mark Nulty joins Bower for the rest of the shows.

Night two is highlighted by a excellent wrestling match between Nigel McGuinness and Chad Collyer and a excellent No DQ match with Punk & Ace Steel against Aries and Roderick Strong. This is a show that truly expresses the respect that ROH has garnered — not only is Liger on the show but Mick Foley makes a surprise appearance and cuts a stellar promo with Punker. Foley came to the show as a fan, for free, to be part of the event, which speaks volumes about the company. Punk hijacked the show and read from Foley’s Tales from Wrescal Lane while calling out Joe for a rematch.

If you have not yet experienced watching an ROH show, you can do no wrong with picking from their fall series of events. Simply put, it is professional wrestling at its finest.