Over the course of his career as the Million Dollar Man, Ted DiBiase flaunted his money, proving to the world that everyone has a price. Even Rob Van Dam.

Huh? RVD? He didn’t face DiBiase in the ring during his career. DiBiase was long retired because of a bad back by the time the ‘Whole F*N Show’ got going. 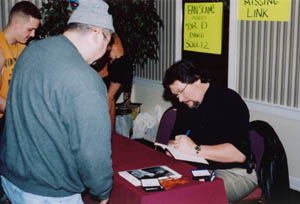 But they did meet in Battle Creek, Michigan — Van Dam’s hometown — during an in-ring skit. The Million Dollar Man challenged a youngster named Rob Szatkowski to cross the guard rail and kiss his feet for $100. Years later, that teen would grow into WWE superstar Rob Van Dam.

Now a minister, DiBiase remembered the early RVD sighting (now a bonus feature on the WWE’s Before They Were Superstars DVD), other skits, and old friends during the Fan Slam fan festival in early December in Totawa, NJ.

“I don’t really watch a lot of wrestling anymore. So I turn the TV on and … I see this Rob Van Dam. Somebody comes up to me and says, ‘Ted, do you remember that show you did where you had the kid come in the ring, and you took off your sweaty boot and had him kiss your feet? That kid, that’s Rob Van Dam.'” DiBiase explained.

“I’d like to meet him now. ‘Hey kid, want to kiss my feet again?'” he joked, eliciting laughter from the fans at the question and answer session.

The Million Dollar Man character was a Vince McMahon creation, through and through. DiBiase recalled being in the WWF office with McMahon and Pat Patterson, hearing the character described to him. “What’s really funny was that during that interview, Vince got a call and I was left there in the room for a few minutes with Pat,” DiBiase said. “Pat looked at me and said, ‘You realize, Ted, if Vince could pull on the tights and climb in the ring, this is who he would be. So you have to know that to do this, this is almost like his alter-ego.’ Those words were almost prophetic.”

It isn’t hard to imagine the current on-screen persona of Mr. McMahon doing the evil things that the Million Dollar Man used to do.

“We had a lot of fun with the character,” DiBiase said. He gets asked all the time about the young, black child who was earnestly dribbling a basketball for the Million Dollar Man and his servant Virgil, when the ball was swatted away just before the prescribed goal was reached.

“We didn’t really jilt the kid,” admitted DiBiase. “Now, I did a lot of that at live events, where there was no television. It was improv. I had 300 bucks at my disposal all the time that help get the character over. I would hand-pick somebody out after an event and do something stupid to see if I could buy them. But anytime we did it on television, it was pre-arranged and determined. The kid got the money before we ever did the show.”

With the basketball skit, he recalled joking backstage that he’d need an armored car to get out of the building. “I keep waiting for that kid to come up and walk up to me. He’s got to be about 20 years old now, probably about 6’5″. He’s going to walk up one day, ‘Remember me? The one that dribbled the basketball for you?'”

Virgil (aka Vincent in WCW, real name Mike Jones) was also at Fan Slam, and told the crowd that it was a wonderful experience serving as a second to the Million Dollar Man. “It was great. Full disposal of everything you wanted. A limousine 24-7. Vince made it unlimited money to spend. I thought it was a great gimmick.”

“It was 10 years ago last month that I physically retired from the ring. In those 10 years, 40 guys, all before the age of 45, are dead, and one woman, Elizabeth. And it’s all because of drug and alcohol abuse. Every single one of them. That’s a real tragedy,” he said. “I’m tired of going to funerals.”

A second-generation grappler, DiBiase says he is not bitter towards the wrestling industry, that it was good to him, and that he loved what he did. “I grew up in this business and I loved it. But, I’ll be real honest with you. The one thing my dad never wanted me to be was a wrestler. Now I’m almost 50 years old, looking back and I have three sons, and I’ve told all of them, ‘You’ll be a wrestler over my dead body.'”

To DiBiase, too often the youngsters wanting to get into the business see the fame and money, and overlook the draining experience that the travel can be, the drug and alcohol abuse, the destroyed marriages, the destroyed families, the lack of a pension or health plan. “You look at the life of the wrestler, it looks pretty glamorous on the surface, because you see him at the arena, you see him being applauded, and ‘Oh, gosh, look at the star.’ But you don’t see the miles and miles that they put on, you don’t see the not-so-glamorous truck stops, baloney blowouts.”

“I’m not sitting here crying about it because I understood what I was getting into,” he said. “Anybody who cries ain’t got no reason to cry. The business doesn’t owe you anything. You’d better be smart with the money you make, you’d better understand what the business is when you get into it.”