Last weekend was proof positive that you can put all the preparation and effort possible into an event, only to have circumstances derail a carefully laid out plan. In short, the weather tombstoned Fan Slam in Totowa, New Jersey.

Having heard the glowing reports on the August Fan Slam event from SLAM! Wrestling’s Steve Johnson and reader Jim Connolly, I jumped at the chance to head down myself. It was an opportunity to sell some of my books, see some old friends and make some new ones. Plus, my wife had never been to New York City, so it was a golden chance to do that as well (for three expensive days).

We left early on Friday, December 5th, both to avoid the traffic out of Toronto, but also because we had heard rumblings of a big storm heading for the East Coast of the United States. Turns out we were smart. We made it to our hotel down the road from the Fan Slam site about an hour into the storm. The drive to the other hotel should have taken five minutes, but took 20 in the snow. Still, it’s nothing to winter-wise Canadians.

The goal on Friday night was to meet up with the folks from Highspots, who run the SLAM! Wrestling store. Hailing from Charlotte, and therefore a tad inexperienced with the snow, they had managed to get their van stuck on a ramp at the hotel and were forced to unload their merchandise in the blizzard. Surprised that we made the drive in the snow, it a good to visit anyway, and make some plans for the future. 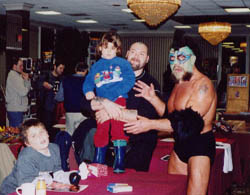 Then Friday night back in our hotel, the bad news started coming in. Bill Apter, editor of Total Wrestling magazine and scheduled host of the Q&A session, had to pull out because of the snow at his home outside Philadelphia. It was the first event he had planned to go to and missed since a blizzard in 1975 kept him from Madison Square Gardens and a Bruno Sammartino versus Waldo von Erich match. Then, fellow ECW Press author R.D. Reynolds (WrestleCrap: The Very Worst of Professional Wrestling) called to say that there weren’t any flights out of Indianapolis for him to come to the show. So we had to arrange to get his books to the event from his planned hotel.

Saturday was the actual Fan Slam event, and it looked bleak: tons of snow outside, and many more inches expected during the day. Dr. D. David Shultz, The Missing Link (Dewey Robertson), Ted DiBiase, Virgil, Chief Jay Strongbow and Bam Bam Bigelow all made it to the event. Others, like Ivan Putski, Kamala and Koko B. Ware had their flights cancelled. Local names like Captain Lou Albano and Crowbar simply couldn’t get there.

Still, there were some hardcore fans lined up to get in before the show started. Hearty dealers had made it out, peddling videos, DVDs, t-shirts, figures and books. Some local indy wrestlers were there to sign autographs.

But the numbers never came close to the estimated 1,000 people that were at the August event. Organizer Tommy Fiero said that he had hundreds of tickets pre-sold that were never picked up. “There were about 995 more people than there was today … for you people who were here today, I want to say thank you very much for coming out and risking your lives to come here and support Fan Slam. My hat’s off to you,” he said at the day’s conclusion.

The fans that did make it were happy to share stories of their adventures on the road, their dedication to make it to the show. No one came further than Japanese super-fans and writers Shuhei Aoki and Kohei Ichiki from Tokyo and Osaka, respectively.

The Q&A session, in front of a few dozen people, was modified at the last minute. I was asked to serve as the host for the session, Virgil was asked to stay for the Q&A, and announcer/author Gary Michael Capetta repeated his participation from the previous Fan Slam. Highspots taped the Q&A that included headliners Shultz, Link/Robertson and DiBiase, making the best out of a simplified session. (We’ll have a few short stories out of the Q&A in the weeks to come.)

In the end, though, there was nothing that anybody could do. I think that everyone who went had a good time. Sure, it was disappointing that some of the big names couldn’t make it, that a few of the dealers were late or didn’t be there at all. The key was making the best out of a not-that-great situation.

But it won’t hurt to join in the wish that there won’t be a blizzard on March 13, 2004 when Fan Slam runs for a third time, the day before WrestleMania XX in New York City. Fiero has an even more ambitious event planned that day, with Bobby “The Brain” Heenan, Ricky “The Dragon” Steamboat, “Cowboy” Bob Orton, “Mr. Wonderful” Paul Orndorff, The Fabulous Moolah, Captain Lou Albano, Leilani Kai, The Iron Sheik, King Kong Bundy, Greg “The Hammer” Valentine, Brutus Beefcake, Tito Santana, Nikolai Volkoff and “Playboy” Buddy Rose (who was The Executioner) already scheduled for the show, dubbed ‘A Tribute to Wrestlemania 1’.