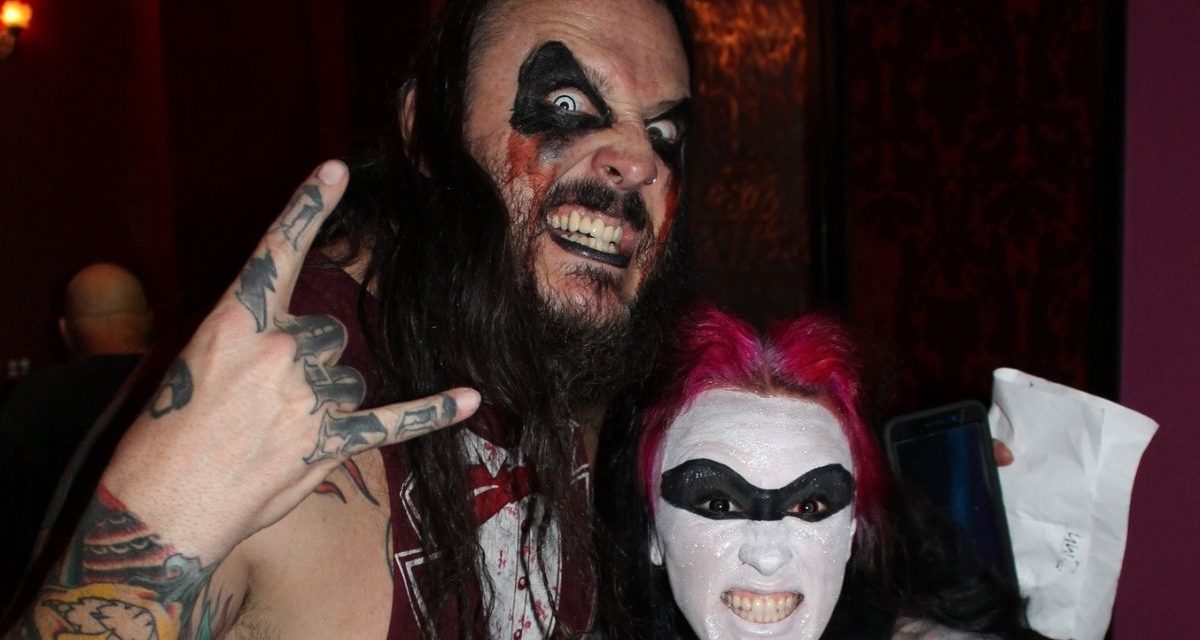 We’ve all been conditioned to give two weeks notice to an employer before leaving for a new job. In Ontario wrestler Sinn’s case, he was given two days notice to get from his Toronto home to Nashville, Tennessee for a TNA PPV taping in the summer.

Needless to say, it was a scramble.

Instead, he got a call from TNA backstage manipulator Scott D’Amore, who told him to come down with Brooks. It was a blur of arrangements — getting the oil in the car changed, hitting the bank and paying bills, packing, doing laundry, cleaning out the fridge. Toronto to Nashville is about 15 hours, said Sinn, “especially with border problems, stopping to actually eat or take nap or something, or getting gas.” 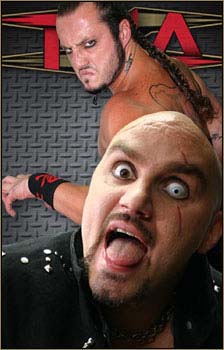 Initially, he was brought in to work a program with Raven. “I already know in the wrestling world, things can change a million times before you get there. So I got there, and I guess they wanted to see what the auxiliary token creepy guys would look like. They already had the New Church. They wanted to have an auxiliary creepy team, so they threw all the token creepy guys they had there — there was me, Crowbar and Gangrel. They put us all together as a six-man just as a look-see.

“They knew I was Canadian and the other guys were American, so it was going to be stickier for me to get down there. So they liked it, for whatever it was. I don’t think they had any plans for it. I think they just wanted to see. I didn’t even know why they’d want two creepy teams at the same time in a promotion like that, unless they were going to do creepy vs creepy for a short storyline or something.”

He stuck around Nashville for the week, and was there at the studio the next week when he was in the right place at the right time to be thrown into a team with Slash. “D’Amore just came up to me and said, ‘Alright, you’re Slash’s new partner tonight. Do the job tonight, kid, and you’re in.'”

Sinn had brought his usual wrestling gear of furry pants, which the promoters hated. On a hunch, he had brought a pair of black PVC pants from his “weird closet”, hoping to fit in with the look of The New Church group.

The mood backstage was very different for his second appearance in TNA because it was seen as a genuine chance to become part of the team, rather than just a tryout. “It was pressure, but it was a good pressure,” he said. The roster was supportive, but very low-key. “They were very nonchalant, and pass you by about it. ‘Good luck tonight, kid.’ You know, like, whatever. Just in passing, nonchalant. Then after the match, the same thing happened. ‘Way to go, kid. You’re in.'”

He had heard both good and bad about the NWA locker room before getting there, but wanted to experience it himself before passing any judgment. “Some people were nice and some people weren’t. I guess it’s like wrestling or anything else. You’re going to have nice guys, jerks, smart guys, dumb guys, tall guys, fat guys, skinny guys. There’s a whole variety,” Sinn said.

“One thing that I thought was cool — everybody’s always preaching about wrestling etiquette and stuff like that; wrestling etiquette to wrestlers is a very touchy, catty thing. It’s quite the dance on eggshells. A cool thing was — I won’t say any names or anything — but some guys, when you first get there, guys who have been around for a while and they figure, ‘who’s this new kid? Who the heck is he? What has he ever done?’ They’ll actually be quite blunt about saying, ‘We don’t know who you are. We’re not going to trust you just yet to do stuff, so we’re going to be real, real distant with you until you show that you’re safe, you show that you’re cool.’ You get a little bit more every week. They give you a chance to show a little bit more, and if you deliver, they’ll let you show a little bit more, a little bit more. It’s weird just how the etiquette of respect has just built. If you’re just nice and try hard and stuff, I guess just like in anything I suppose.”

He has made friends in different promotions, from Border City Wrestling and Neo Spirit Pro Wrestling in Ontario, to Pennsylvania’s WXW, which is run by Samoan Afa. Indy wrestlers by their very nature have to be able to get along with each other quickly in order to pull off decent matches quickly. Sinn would that some of the TNA stars aren’t any different. “Some of the guys were so hospitable and so nice. You go to indy shows, and guys are that way anyway. It’s cool to see that the guys that are name guys are still as grounded as starving indy guys. Like Slash, for instance, or Kid Kash, for instance. Being out on the road, Kid Kash is the only guy who’s cooked me a home-cooked meal since I’ve been out of Toronto. ‘Yeah, man, come on over. I’ll cook for ‘ya. I know what it’s like.'”

“Everything I do to the babyface should be vicious, like I just want to win and want to humiliate the guy, and I’m hot that he’s been out-wrestling me or whatever. Hence, a heel. A heel is not a heel because he is wearing black … a heel heels because he’s getting hot and he has to cheat. I don’t think that a lot of guys see it that way these days. I think a lot of the heels these days are very Stone Cold-ish, where they’re like a babyface with an attitude.

“I was weaned on ’80s and early ’90s wrestling. That’s just the thing that I grew up on, that’s what I love. I just try to give a 2004 version of that. I want to be, in no unspecific terms, I am the villain. I’m going to get one-upped like the villain should. I’m going to get upset and angry and cheat like the villain. I don’t want to shine. I’ll sneak in the odd move, sometimes, especially at an indy show to kind of show marks — the guys who think they’re smart marks, which I think is such an oxymoron — just to show I can flip, I do some weird thing if I felt like it. It’s not in my character to feel like it. So, yes, I can keep up with a cruiserweight, I can go fast, I’m as stealthy, or have good cardio, I know as many wrestling holds as any of those guys. I just choose to be that classic villain that takes punches, chokes.”

A native of Orangeville, Ontario, the 6-foot-2, 234-pound Cvjetkovich trained primarily under El Fuego (Rob Etcheverria) and Ron Hutchison, having been directed the Hutchison’s school by the WWE’s Edge and Christian, who are also from Orangeville. He debuted during the AWF’s Iron Man Tournament at the Canadian National Exhibition, working against El Fuego.

His father and mother both were into karate, and Nick followed in their footsteps and has his black belt. Always interested in drawing and comic books, he self-published a series of ‘Fred the Possessed Flower’ comic books. His brother, Stevan, is an author and together they each wrote half of the comedy-horror novel Between Chapters in 2000. (Stevan also manages the Squared Circle Wrestling Gym in Toronto’s west end.)

In December 2002, he starred in the Toronto-shot B-movie, Enter … Zombie King as the lead villain, The Zombie King. He hopes that acting will provide an occasion paycheque, but harbours the wrestling dream. “I do freelance stuff to make a couple extra bucks, but for the last longest while, it’s pretty much been constant wrestling. Doing the comic books and stuff actually paid for wrestling school, and paid for a lot of my time on the road while I wasn’t making hardly any money,” he said. “Still, I’m not making any great fortune or anything. I’m still a starving wrestler. Starving wrestler, starving artist, same thing, just more letters.”