Overall, Before They Were WWE Superstars 2 is not a bad piece, but one that’s been probably seen by every wrestling fan before.

Much of Tazz’s bio talks about his growing up in Brooklyn. Comments from Tazz and his father attest to the roughness of the area, including that his school was one of the first to have metal detectors. Tazz’s background in judo and football shows how legitimately tough the guy is. We learn from his coach just how hard the Smackdown! announcer is.

Tazz spends a portion of his bio walking around his old high school football stadium, describing how rough it was. Given Tazz’s excellent speaking ability, the segment is really enjoyable to watch.

Next up, we learn about Tazz’s early training from Johnny Rodz, then progresses into his ECW days. It’s really fortunate that Paul Heyman was with WWE to be able to comment on Tazz’s time in ECW, leading up to his debut at the Royal Rumble. WWE be damned for not pushing this guy to a title right away, because the reaction to Tazz was nothing short of massive.

The segment is awesome, and is a must see, if for nothing else, than to hear Tazz’s mom, of all people, call him, “the most mischievous little b*tch that ever walked the Earth.” 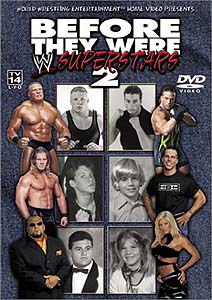 Cena’s bio starts with his friends talking about him being a goof, doing wild stuff just for the sake of doing wild stuff. Basically a class clown, Cena’s zaniness would later be seen in a clip of him walking around in a thong and afro wig. This explains how he gets away with doing his current thug gimmick to a tee.

Cena’s parents and grandmother comment on him as a child, with Cena adding his own comments on his unique style, admitting to wearing MC Hammer pants. After this, we further learn how much a goof Cena was, as he and his brothers talk about how they’d basically wreak havoc on their family home. The stories are unique. We also learn that Cena would organize “wrestling events” in his basement, going so far as to create cardboard title belts for everyone. Of course, being booker, he’d give himself the jmost important title.

Cena’s bio is awesome and definitely worth a look.

HBK’s bio kicks off at an airport base where his father was stationed. It’s eerie how much Michaels looks like his dad.

Michaels is described by his dad and mom (who really wanted Shawn to be a girl) as a shy, nice kid. Michaels takes is through his old neighbourhood. We learn about his high school life, pretty typical ladies’ man and football star.

Shawn’s parents tried to discourage him from wrestling, but he always would watch and wanted to be a part of the business. We learn from his friend how they’d practice wrestling moves in the gym and in the family’s pool, including putting on a match at a school talent show.

We then learn about HBK’s training with Jose Lothario, and his progression through the territories. We also learn about how the Rockers started and got their break in the AWA. The first stint in the WWF was a short one before they go through Tennessee and AWA. Eventually, they get back into the WWF and the rest is history.

An overall solid segment, especially if you haven’t seen the Confidential pieces.

We start with Nowinski’s tour through Tough Enough, and his venture into the indies before getting started in his WWE career.

Nowinski had an athletic, yet geeky childhood, then really started big in high school. We see a lot of home footage of his acting and athletics careers. Moving onto Harvard, we hear about his football career, and learn about his development on the gridiron. Then we FINALLY here about his wrestling fandom and his Tough Enough career (he left Killer Kowalski’s school to participate in the show).

This segment did nothing really to entertain me. Nowinski really doesn’t show much of an interesting personality or upbringing, and could’ve been avoided.

Snow’s bio starts with talking about Georgia Championship Wrestling and how he got his break with the company through Al Lancaster. We also see some EARLY clips of Snow, which is absolutely amazing.

In 1994, Snow got his break in ECW. He got offers from WCW and the WWF, and he would end up with the WWF. Snow talks about his early gimmicks, including Avatar, Shinobi and Leif Cassidy. Between gimmicks, Al was given breaks at home, which he was frustrated with. Eventually, Snow was loaned to ECW. We also learn about the origin of Head, which is a pretty cool story. Eventually, Vince called Snow to come back to the WWF, and we know how Snow’s story has gone since then.

This is easily one of the best wrestling stories I’ve ever seen, in and out of this DVD.

We start with a show of the three Ortons and see some stills of Orton with Hogan and Andre. Momma Orton wasn’t a fan of Randy going into wrestling.

Randy entered the marines, but tried to leave. Eventually, he was caught, and was disciplined. He would soon leave the corps, however, and his father helped him get to Stamford for a contract. He would be sent to OVW, and we see footage of his development. Several superstars and WWE employees comment on his development.

The bio, overall is pretty short, but was cool for what it was.

Jericho’s bio starts with him talking about Winnipeg and how the coldness toughened him up (I can attest to that).

Jericho’s father, Ted Irvine, talks about how he loved to read and play sports. We get some cool home videos. A lot of the video is footage of Chris and his friends talking about water polo and music.

Jericho was a wrestling fan early on, and a chance meeting with Jesse Ventura at a charity hockey game lead him to get into the business. He would train in Calgary with Lance Storm, and ended up back in Winnipeg with the WFWA (one of the many Tony Condello promotions). Jericho then talks about his time in Japan and Mexico, and his eventual title runs in the WWF.

The piece overall is good, but there were a few holes in it (ECW, WCW, SMW etc.). It’s too bad the bio couldn’t be longer, but hopefully we’ll get a solo DVD soon of Y2J.

We start with Torrie’s family talking about her debut in WCW and comments about the skimpiness of her clothing. Her brothers express concern about her wrestling.

The bulk of the bio is her family talking about her early and high school life. Interestingly, her stepfather gives a lot of commentary, but not her birth father, Al. I guess they’re still going with the illusion that he’s dead. They also talk about her modelling, eating disorder, and fitness-modelling career.

The segment is painfully long for the typical “smalltown girl” who hits the big-time.

As it turns out, RVD was a pretty geeky kid, according to his parents. There’s home movies of Van Dam as a kid with his siblings. He’d love to swim, and learned a lot of his acrobatics on the diving board.

School teachers talked about RVD as being a goof, at times life his teacher and give her helicopter spins. Then we learn about a backflip he did off the roof of his school.

Overall, the main portion of the DVD is pretty good. It’s somewhat like watching an extended Confidential piece, but not a bad compilation by any stretch.

Now onto the extras…

Extra 1> Rob Van Dam kisses Ted Dibiase’s foot for $100.00 – This is one of those surreal wrestling moments, and one that is really cool to see. The footage is from WWE Challenge, and the Dibiase voiced-over promo is a good keeper.

Extra 2> The Rockers vs. “Iron” Mike Sharpe/The Intruder – A more than decent debut for the then AWA veterans. Vince and Jesse Ventura provide commentary in the bout, talking about an injury to “Superstar” Billy Graham. A voice-over promo has The Rockers challenging Demolition. The Rockers, of course, win the match, with a double-team hiptoss into a pin. Rating – 4 out of 10.

Extra 3> Al Snow story – Snow relates a story about how he searched for a wrestling school, eventually getting through to a tryout at Gene and Ole Anderson’s school. The story is pretty graphic and funny at the same time. This could’ve been included in the DVD. A good story, nonetheless.

Extra 4> Avatar vs. Brian Walsh – For those who don’t remember, Avatar had a very similar look to Hayabusa, only Snow would only wear the mask during the match. The match is pretty acrobatic with Snow hitting some sweet moves, and Walsh is pretty good himself. The segment, interestingly, begins with Vince and Jerry Lawler talking about Michaels’ beating outside a nightclub. Snow wins with a stomach stand into a big splash. Rating: 4.5 out of 10

Extra 5> Chris Jericho vs. Alex Wright – This is Jericho’s WCW debut. Eric Bischoff and Bobby Heenan are on commentary, talking about the two as the future of WCW. Gee, and Jericho was one of the men responsible for the death of WCW. In any case, the match is a good bout between the two, with high-flying moves all over the place. For reference, this is near the beginning of the nWo, before Bischoff turned. The match ends when Wright collides with the ring barrier after a top-rope move. Jericho, rather than taking the coutout, calls the match dead. He’d never do that now. This was shorter than it was supposed to be, but not bad overall. Rating: 4 out of 10.

Extra 6> Tazz vs. Mikey Whipreck – This is from the ECW Invasion in 1997. This is also one of the few times that Paul Heyman and Jerry Lawler were on commentary together and they work well. Tazz dominates with a variety of suplexes including a release Tiger Suplex and sweet Northern Lights. Sabu at one point, draws a crowd by diving off the set. He doesn’t actually interfere in the match though. Tazz wins this one with the Tazmission. Great nostalgia piece here Rating: 4.5 out of 10

Extra 7> Torrie Wilson vs. Tygress – A good year and a half in WCW and THIS was the best they could do for Torrie? This is her debut “match”, and is a bra-and-panties bout, which she loses. Terrible. Rating: 0 out of 10

Extra 9> John Cena vs. Kurt Angle – We start with Angle’s now-famous open challenge, which Cena accepts. This match is on one of my compilation tapes, so that should tell you immediately what I think of it. Angle sells for Cena very well, and at times it looks like Cena will pick up the W. Angle, of course, ends up with the duke with a Tiger roll-up. Rating: 6 out of 10

Overall, the extras are pretty good, but there could’ve been more. Neither Orton or Lesnar have extras, and one of RVD’s early WWF or even WCW matches would have been great on the DVD. Still, it’s worth checking out, as it it’s an interesting look at the break-in days for the WWE stars of today.