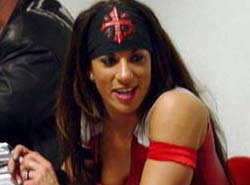 Let’s see … she sets herself on fire … she’s a substitute schoolteacher … she has three college degrees … she wrestles men.

That’s probably enough for starters, yet even that expansive list of endeavors is barely sufficient to capture the lifestyle of NWA-TNA wrestling star Trinity.

In fact, the TNA rubric, which is shorthand for “Total Nonstop Action,” might just as easily be applied to the stuntwoman-turned-pro wrestler billed as “The Untameable Spirit.”

“I’m high on life, I have a very high zest for life. I have a 10-year-old inside me,” the effusive New York native told SLAM! Wrestling. “This is such a great way to express myself and to do the extreme things that I love to do.”

In the last year, Trinity has been on the fast track to wrestling prominence, ascending from the role of a valet to a major performer on NWA-TNA’s weekly pay-per-view telecasts.

More than just another pretty ringside face, she has combined the high-flying moves of a practiced stunt artist with a fit, athletic look, which comes from her lifelong infatuation with sports and physical challenges.

Throw in a dose of personal appeal and a pierced tongue that reminds you she is forever defiant, and it\’s understandable why Trinity has turned the heads of fans and wrestlers alike.

“Trinity is a hell of a worker,” said NWA-TNA star Tracy Brooks. “She’s snug, she’s respectable, she’s great, she knows her moves, she knows her stuff, and she looks amazing. She’s all about putting on a great match, entertaining the fans.”

“She does have a lot of natural charisma,” said Kid Kash, who fought the 5-foot-6 Trinity as part of a controversial “man versus woman” angle in NWA-TNA earlier this year.

Even if you’re not a wrestling fan, you’ve seen Trinity in action. You just don’t know it.

Trinity, nee Stephanie Finochio of Long Island, N.Y., has appeared as a stunt double, dancer, and actress in scores of movies, television shows, and commercials.

She earned separate bachelor’s degrees in psychology and business, and a master’s degree in elementary education and secondary business at Dowling College in Long Island.

But few teachers and academicians live life on the edge, so, when an uncle suggested she consider stunt work, she packed her bags and headed to California.

“I was the second child — no boys — so it was all sports for me all the way,” she explained. “I was like my dad’s little tomboy and he raised me to be that way. I did every sport I could do, and I really got involved in fitness and being a personal trainer and so on.”

Trinity spent four years in California, accumulating an impressive list of credits. Included in her resume is work as a stunt double for Jennifer Lopez in Anaconda, Sandra Bullock in Two Weeks Notice, and Jennifer Garner in Daredevil.

In the guise of Beth Chamberlin, a leading character in The Guiding Light soap opera, she took a 20-foot fall from a castle window, landing on some boxes and mattresses.

Chamberlin apparently can make super-hero comebacks to rival the best of Hulk Hogan — she “survived” the fall, and Trinity reappeared as her stunt double a few months later to be washed away by 500 gallons of raging rapids.

Trinity’s mother, who still lives in Long Island, was not terribly comfortable with her daughter’s chosen profession, especially when set herself on fire in full view of the Babylon, N.Y. neighborhood.

“I brought home some fire suits that I wanted to test. I wanted to show her it was very safe,” Trinity recalled with an uproarious laugh. “My neighborhood and everyone was watching. It was wild.”

After kickboxing, fires, rappelling, and roaring waters, it was only natural that Trinity gravitated toward the world of moonsaults and huricanranas.

About three years ago, she set up a wrestling ring in the backyard in anticipation of an independent film on backyard wrestling. That project fell through, but her interest in the squared circle led her to training sessions with former ECW star Mikey Whipwreck.

Initially paired in NWA-TNA as Kid Kash’s valet, Trinity was a major part of one of the most notorious pro wrestling angles of 2003.

After several months as a team, the pairing fell apart over her desire to expand her wrestling activities. In April, Kash stood by idly while the Harris Brothers beat her down after a match. The following week, Kash slapped her and challenged her to a one-on-one contest.

That first bout included an array of high-flying moves by both, but the focus clearly was a wicked chair shot that Kash delivered to Trinity. Trinity did come out on top, though, when the Harris Brothers and Mike Sanders intervened on her behalf.

In succeeding weeks, Trinity, disguised as a masked luchadore, slipped into the ring to cost Kash his X-Division title. A second, briefer match between the two ended when Kash pinned her after a tombstone piledriver.

Kash admitted that he didn’t care for the angle, which attracted criticism because of its implied acceptance of physical abuse towards women, even though it was “staged.”

But the effervescent Trinity sees a different side to the feud, believing that it demonstrates that women can be strong and independent, and challenge men on their own turf.

“That angle was so true to my life, always overcompensating and proving that even though I’m a woman, I can hang with the guys,” she said. “Every business I got into was a guy-oriented business. They always try to push you out of it to see if you can take it. It’s important for me to stand my ground.”

And it’s also proof that women can be more than sideshow jiggle, Trinity said. She’s been conducting research for an article on women’s wrestling and said there’s a fine line between titillation and entertainment.

“At one point, you think women are taking a leap, proving themselves with more athleticism and more wrestling,” she said. “I don’t feel that people should be let in just because of their T&A qualities.

“Unfortunately, sometimes you have to think of the fan’s mentality and it’s a male fan-oriented sport. So every time it takes five steps forward, it takes three steps backwards.”

In the last several weeks, Trinity — her name predates The Matrix movie heroine — has been limited to ringside work and interviews as she recovers from a sprained knee she suffered during a run-in at a match in July. She caught her leg on the floor when D’Lo Brown dumped her outside the ring.

At first, she feared that she had torn her ACL because the pain was unlike any injury she’s had — and she’s had quite a few. But a second opinion determined no ligaments were torn, and she rehabbed on her own.

Recently, she made the shift to heel status, pairing with Vince Russo and NWA-TNA villains. She’s wrestled some matches on the independent circuit and is anxious to get back in the NWA-TNA ring.

To accommodate her wrestling work, she’s made the big transition from Yankee to Rebel, moving from Long Island to Nashville, Tenn., the home of the promotion.

That meant curtailing her work as a substitute teacher in North Babylon, N.Y., which she has done on and off for about five years.

But that doesn’t mean she’s cutting back on her workload. She is headed to the big screen yet again, playing the love interest of the lead actor in Coalition. The Ariola Productions film is based on organized crime infiltration of minority hiring groups. It’s in pre-production and is scheduled for a spring 2004 release. Kash is also scheduled to appear in the film.

“I love that and I might consider some more movies in the future, but right now, my entire focus is on wrestling,” she said.

“Yes, I wear some nice outfits and might be appealing to the eye, but I think that I’ve showed I mean business. I do work hard, and I’m going to do my best to be the best wrestler I can be.”

Steven Johnson is a writer from Virginia who grew up watching the stars of the Buffalo promotion. He can be reached at [email protected]

Trinity at an autograph signing in Nov. 2003. (Photo by Steven Johnson)