Larry Booker, who worked as Moondog Spot, died Saturday, November 29, 2003, at the Mid South Coliseum in Memphis during his tag team match.

The Moondogs were in a four-way concession stand brawl that included the Rock’n’Roll Express when Booker collapsed. He was rushed to the Methodist Central Hospital and was pronounced dead on arrival. He was in his 50s.

April Pennington has been the Moondogs manager for the last few months in Memphis Wrestling, and was at ringside Saturday night. “Things were going fine in the ring,” she told SLAM! Wrestling. “He asked me for the belt [to use as a weapon]. The next thing I knew he was down.” 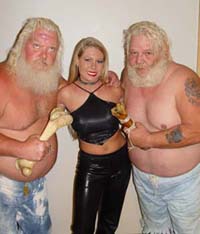 Moondog Spot, left, in 2003 with manager April and his partner. — Courtesy aprilpennington.com

In worked sport like wrestling, it can be difficult determining what is and isn’t real. “We all though he was just working part of the match,” she said.

When Booker’s partner, Moondog Puppy Love realized what happened, the match immediately went to a finish. The ring announcer told the crowd that it was not part of the match. CPR was performed on Booker until the ambulance arrived. His wife and son were in attendance at the show. The East Coast Bad Boy tag team took Booker’s son to a private room to comfort him as the attendants worked on his father.

Booker was best known as Moondog Spot during his long career, but that gimmick came about through the misfortune of another. On March 17, 1981, the Moondogs (Rex was Randy Colley, King was Sailor Ed White), managed by Captain Lou Albano, beat Rick Martel and Tony Garea for the WWF tag team titles in Allentown, Pennsylvania. Newfoundland native White was prevented from entering the United States two months later, and on May 1st Booker was brought in to be Moondog Spot. (The storyline in the magazines was that Moondog King had been hit by a car that he was chasing.)

After dropping the WWF titles back to Martel and Garea on July 21, the Moondogs hit the road. Their most famous matches were out of Memphis, where under the management of Jimmy “The Mouth of the South” Hart, they battled the Fabulous Ones (Steve Keirn and Stan Lane) and Jerry Lawler.

“With scraggly hair and beards, Spot and Rex wore tattered blue jeans and simple black boots to the ring, always carrying their trademark oversized, dinosaur-looking bones. Jimmy Hart, at the peak of his Memphis run, supposedly had brought the Dogs into the area to sic them on the Fabulous Ones, Steve Keirn and Stan Lane,” wrote Scott Bowden in a recent Kentucky Fried Wrestling column on Moviepoopshoot.com.

“It was one of those gimmicks that fans really bought into,” explained Lawler in his book, It’s Good To Be The King … Sometimes. “They acted real crazy. They had these huge cow bones they gnawed on as they came into the ring and they used them as weapons. … They were fun. Every match with them was a hardcore match.”

Back in the WWF, Booker (as Moondog Spot) made the second round of the Wrestling Classic PPV, losing to the Junkyard Dog after beating Terry Funk by countout in the first round.

After debuting around 1976, the 6-foot-2, 298-pound Booker’s first big break in his career came under the name Larry Latham, teaming with Wayne Ferris (later the Honkytonk Man) as the Blonde Bombers in Memphis. They had a run with the AWA Southern tag team belts in 1979. (Latham would win the same titles in October 1980 with partner Bill Irwin.)

The Bombers had a very famous match against Jerry Lawler and Bill Dundee in Tupelo, Mississippi that went into the concession stand. “We threw gallon jars of mustard at each other and they splattered over the wall; we knocked down the tables. Of course, I jammed someone’s head into the popcorn machine and broke the glass, which got us in trouble,” wrote Lawler in his autobiography.

Over the last number of years, Booker continued to wrestle as Moondog Spot around the southeastern United States, and he ran a wrestling school. His last major appearance was on March 19, 2003 when he showed up on a TNA PPV, coming through the crowd to team with Hacksaw Duggan to beat Glen Gilberti and Mike Sanders.

For Pennington, who has been in the business a little over a year, Booker was the head of the team. “Larry was kind of our leader, the guy in control, always guiding us through things.” He was particularly excited about having a female manager for the Moondogs, Pennington said.

Funeral arrangements are not known for Booker at this time.