DragonKing Press hits with Best Of

The test of a book for me is how often I see myself referring to it down the road; does it have proverbial legs? On that basis alone, The Best Of DragonKing Press Newsletter is a gem. 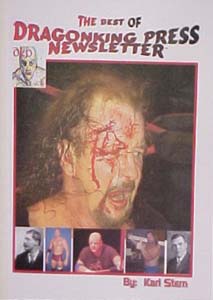 It’s a collection of various issues of the DragonKing Press Newsletter, which has been run by Karl Stern since 1999. In his introduction, Stern likens his newsletter as the Time magazine of the wrestling industry, while the Wrestling Observer is the Wall Street Journal. Personally, I feel it’s a little more like Discover magazine — there’s a lot of stuff that is so deeply researched that keeps it from being totally mainstream.

The primary focus of DragonKing Press Newsletter has always been the history of the business, and it excels at putting the events of today into a historical perspective.

By far the best reason to get the Best Of book is the often-talked about “Wrestlers who die under the age of 40” issue, from September 2002. By my criteria, I can definitely see myself referring to this alone numerous times. Instead of just listing names, Stern takes a statistical perspective on it, tallying up how they died. It is a very disturbing number.

Other strong inclusions in the Best Of include the story of wrestling pioneer William Muldoon, a look at Abraham Lincoln’s wrestling connections and an interview with Harley Race. Some of the other choices don’t stand up as well. The list of the 100 Most Influential People in Pro Wrestling History seems dated in many ways, and Stern admits as much in a preamble at the beginning of the book, saying that the same list today would be very different.

The packaging of the whole Best Of DragonKing Press Newsletter isn’t exactly polished either. It’s a bound collection of photocopied past issues, complete with the typos, inconsistent printing styles and poor photo reproduction that are the hallmark of the self-publishing industry. Not that there’s anything wrong with that; it’s just that it’s important to know what you are getting.

While reading the Best Of DragonKing Press Newsletter, one comes away with the feeling that its contributors — especially Stern — truly love the pro wrestling industry and celebrate it in a way that a true mainstream commercial magazine couldn’t.