“He was the guy that saw something special in me and took the time to train me,” said Blade. The lessons taught by Bastien would come into use sooner than Blade expected. “I caught on quickly,” he said. “Back then, usually it took you six months to get to your first match. I had mine after the first month. I didn’t sleep the night before. I was really nervous, but it was a good feeling of nervousness. It wasn’t stress.”

On June 21st of that year in Gatineau, Quebec, the rookie Blade entered the ring, with wrestling boots borrowed from his mentor Bastien. Although pleased with his debut, it was a chance meeting with Canadian wrestling legend, Edouard Carpentier, which made his debut to life as a professional wrestler all the more special. 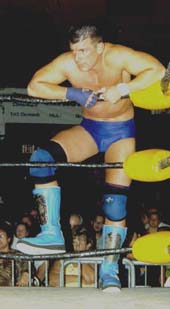 “He was there as a special referee,” recalled Blade. “As I was unlacing my boots, he came up to me and said ‘By the way kid, you did a nice suplex on your opponent.’ That moment for me was amazing. He’s one of my heroes.”

Since then, Blade has run the gamut of promotions throughout Quebec and Ontario, perfecting his craft and establishing himself as solid ring performer that can deliver a diverse repertoire of wrestling offense.

But it has been his tenure with CPW where Blade has established himself as a break out talent and fan favourite, with memorable matches against the likes of Casey Katana and his most recent feud with “Righteous” Rick Sterling. Echoing the sentiments of many indy workers, his ultimate goal is to acquire some overseas experience that will ultimately lead him to the same promotion that got him hooked on wrestling as a child, World Wrestling Entertainment (WWE).

What’s helping Blade to achieve that dream is his firm belief that there is always something new to learn in professional wrestling. “I’m always learning and I’m always encouraged. What I’m really concerned about when I’m wrestling is making sure the fans get what they paid for and more,” said Blade, who when the opportunity presents itself, will pass on his knowledge to new recruits at the CPW wrestling school.

“That’s something I love doing,” Blade remarked. “When I started, someone gave me a chance and if I can give someone else a chance, then I’ll gladly do it. It’s a joy to see that I am not the last generation of professional wrestler; that there are others following us.”

But like any of the hundreds of workers who traverse the independent wrestling circuit, Blade is not ignorant of the hardships of his trade. Despite this, his passion for being a wrestler remains and continues to be bolstered from the past, recalling a recent occasion he had to chat with former wrestling great and CPW president and promoter, Gino Brito.

“After the show I had a chance to sit down with Gino and he told me all the great stories from his days running International Wrestling,” recalled Blade. “I sat in the back with him until midnight, just listening to all these stories about Dino Bravo, Rick Martel and others.

“That’s part of the motivation; talking to people like Gino Brito as far as for me to keep going,” he went on to say.

Having attended International Wrestling shows himself at the Robert Guertin Arena in Hull, Blade admitted he feels a special attachment to Brito and others who laid the rich foundation of professional wrestling here in Canada. “If it wasn’t for those guys, maybe wrestling wouldn’t be here. I feel like I owe them something.”