TOTOWA, NJ — In 40 years as a wrestler, manager, and executive, James J. Dillon has seen the past, present, and future of professional wrestling.

The present — he’s reached an uneasy truce with it.

But the future — that’s where his doubts really creep in.

“I think it will die a death for several years and have to be resurrected from the ashes,” Dillon said of the current state of professional wrestling.

With a monopoly promotion in the WWE, a lack of places for aspiring wrestlers to learn the craft on a regular basis, and storylines that are fundamentally flawed, “it doesn’t bode well fore the future of the wrestling business, in my personal opinion,” he said. 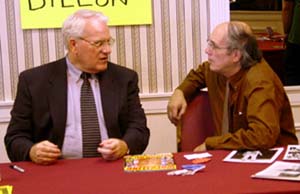 Dillon’s views, expressed in discussions and a forum at the FAN SLAM! wrestling festival last weekend, come from someone who has the experience to know what works in the profession – and what doesn’t.

Entering the ring in 1962, the Trenton, NJ native wrestled and managed around the globe, logging an estimated 3,355 matches and traveling, by his count, more than 1.2 million miles by car.

His last match was in 1989, but he had long since become known as “Manager of Champions;” in particular, standing as the boss of the legendary and villainous Four Horsemen of WCW — Ric Flair, Tully Blanchard, Arn and Ole Anderson, and later, Lex Luger.

He has been a referee and agent for regional promotions, and was head of talent relations for the WWF in the early 1990s before returning to finish his career with WCW.

But turning the odometer; holding individual and tag titles in Florida, the Midwest, and elsewhere; or merely acting as a mere front man is no guarantee of knowledge and wrestling savvy.

Dillon, in the opinion of Bobby Heenan, could do much more than pile up miles on dusty west Texas roads during his heyday in the regional Amarillo territory, a favorite stamping ground.

“He was the reason for the Horsemen’s success,” Heenan said after a FAN SLAM! question-and-answer session. “He was the ringleader. He made it work.”

Among Dillon’s concerns is that a constant flow of improving talent is the foundation for the long-term success of any wrestling company.

“The problem in professional wrestling is that [WWE owner] Vince McMahon has put all the competition out of business. And so there is no place for young talent to learn their craft,” said Dillon, nee Jim Morrison.

Independent promotions are a step in the right direction, “but a young wrestler cannot wrestle three times a month in front of a small crowd and grow to the level you need to,” he said. “That’s a part that saddens me.”

Dillon, now a successful real estate executive with Prudential Realty in Atlanta, speaks without malice and far removed from his blustery wrestling persona.

He makes it a point not to bad mouth anyone associated with the business.

“There have been a lot of people in the business who have been knocked over the years, but they’ve been people who, in my personal experience, treated me right. So I have always believed in not saying anything negative about someone who treated me right, just because someone else had an axe to grind.”

That makes his calm, measured observations about the state of wrestling in 2003 even more consequential.

He believes the so-called “brand extension” of the WWE into RAW and Smackdown rosters will fail in the long run, because of the lack of new, talented wrestlers — and an overemphasis on the McMahon family involvement in storylines.

“With a limitation of the talent you do have, and to split it into two factions I think is a flawed plan, and eventually they’re going to have to unite it to survive.”

Dillon chalked up at least part of the demise of WCW to the forceful “Type-A” personalities of Eric Bischoff and Vince Russo, who could be very persuasive with high-level company executives who knew little about the industry.

Their “throw dollars at the problem” style and management of WCW contradicted Dillon’s long-held belief that “for a general run, if you spend more money than you are going to make, you will not last very long.”

Dillon has been content to move on to other opportunities. He enjoys his home of Atlanta and its burgeoning real estate market, he said.

But even the old, cold-hearted J.J. Dillon would have been touched with the reception at the FAN SLAM! festival, he said. “It’s just nice to see so many people do appreciate the good old days.”