Windsor, Ontario based independent promotion Border City Wrestling (BCW) celebrates its 10th anniversary this Thursday at the Ciociaro Club with an action-packed show, headlined by a BCW Heavyweight title showdown between D-Lo Brown (current champ) and Justin Credible (challenger and former ECW Heavyweight champ). Yet they are hardly the only big names on the show.

It’s gonna be an entertaining night,” BCW owner/booker/wrestler Scott D’Amore told SLAM! Wrestling. “I think there’s gonna be a good atmosphere, we’re gonna put on some great wrestling, and most of all to me, more so than a wrestling event, this is a night of a celebration of a company that really shouldn’t have lasted one month lasting 10 years.” 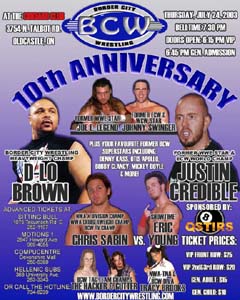 Leading up to the anniversary show D’Amore has been experiencing moments of “amazement” that the company has lasted this long, and furthermore is proud that BCW has earned a reputation as one of the more professionally run Independent promotions in North America. “There’s a real pride in what we’ve accomplished,” stated D’Amore, a gritty wrestler who earned a good reputation while working as an “enhancement talent” in WCW from 1993-1996. “We’re not a huge organization, we’re not something that is ever going to change the landscape of wrestling; we’re just a really good little local wrestling group. I’m proud of the fact that we put on great shows and the fans support us, and that we’ve been able to continue to be successful this long. I’m also proud of the amount of really talented, good people that went through here on their way to going on a bigger scale.” In fact, BCW has played home to the likes of Edge, Christian, Test, Rhyno, Al Snow, Tommy Dreamer, Sabu, Mikey Whipwreck, Nova, Johnny Swinger, Dan Severn, Joe E. Legend, and myriads of other wrestling stars throughout its tenure.

The company has made many inroads since debuting in early 1993 under the joint ownership of the late ‘Canadian Destroyer’ Doug Chevalier, Chuck Fader, and of course, Scott D’Amore. D’Amore explained to SLAM! Wrestling that in the early days of BCW Fader “handled all the promotions and everything,” Chevalier “the wrestling end of things,” while he operated as a “junior partner,” running back-and-forth and doing whatever possible to make the promotion a success. In late 1994, the then 20-year-old D’Amore took over Chevalier’s role in the company after the latter could no longer stay actively involved in BCW after moving to Northern Ontario, and when in late 2000 Fader stepped down after being diagnosed with throat cancer, D’Amore inevitably gained full reign of the company.

After a couple month’s hiatus at the commencement of 2001, D’Amore and the BCW crew started running shows regularly again and with the assistance of the local talent and close personal friends of D’Amore’s, such as Dreamer, Nova, Swinger, and Whipwreck. The company started on an upward climb which to this day is still gathering momentum. “We started as a group that ran in front of 150-200 people and now we regularly play before 1,000 people or more,” said D’Amore. Fader has since returned to the promotion too. “Chuck Fader, thankfully, was able to knock the cancer back into remission and everything, and he’s back on board in a limited role. He doesn’t get to do as much as he used to but he’s still out there hustling the streets and helping us with promotions.”

Humble by nature, D’Amore is quick to credit others for the success of Border City Wrestling. “I sometimes get a lot more credit than I deserve for how things run. My background was Communications Studies, specializing in television production so when I put on an event I am cognizant of the fact that we’re trying to put on a performance maybe a little more than some other wrestling promoters are who are strictly looking at a wrestling show.” The 28-year-old continued, “The fact that I think that, that means nothing unless everyone else involved buys into that concept. We have such a great group of people out here that just love Border City Wrestling and work hard for it and want to see it succeed. They all buy into the game plan of what we’re doing. We’ve got a real good group of people that run the day-to-day operations and really work their butts off so I can do my stuff in Nashville [for NWA TNA] and just kinda advise them and guide them.

“I think the main thing is, and this is something that I’ve learnt from a couple of different people, including one guy who I wish I would’ve got to spend more time learning from, but the conversations I did have with him I always learned so much, was Paul Heyman. When I questioned him a little bit about running a company, and booking and everything else, he said, whether you’re dealing with wrestlers, or behind the scenes people, or people selling tickets or whatever, the key to being successful in anything in life is to hire people for a job they’re good at and being smart enough to stay out of their way and let them do it. . . So if you surround yourself with good people, if you bring in people that are good at what they do, and then you show faith in them, trust in them, and you show a commitment to them then they’re gonna perform for you.

“You add with that the fact that we probably have a little more volunteer support and everything else than a lot of other wrestling groups. And we have a really good fan base. There are people that enjoy wrestling and they enjoy seeing something other than WWE. They enjoy WWE, but on the flipside, they like Border City for the fact that they may have to go pay $60 or $70 to see a WWE show — they come to our show for $15 and they’re gonna see stars that were with WWE or are national stars, they’re gonna see up and coming stars, and they’re gonna see a great show at a good venue that’s pretty well produced.”

D’Amore believes unlike many Independent organizations, BCW is fortunate enough to have an “ideal” facility for wrestling – the Ciociaro Club. “The Ciociaro Club is one of the top banquet, wedding, and party halls in Ontario,” D’Amore told SLAM! Wrestling. “I mean this place is beautiful. We’re talking sculptured fountains when you walk through the front door, high arch ceilings like you’re in a church, we’re talking about a wonderful place and they’re very open in having wrestling there.” Despite a downswing in the local economy recently, D’Amore is still expecting a relatively “full house” of “750-1,000 rabid fans” on Thursday.

In spite of his many roles behind the scenes, D’Amore will be participating on the anniversary show in the ‘legends’ six-man contest which features the first-ever BCW Heavyweight champion Mickey Doyle, ‘Irish’ Bobby Clancy, and Scott D’Amore as the babyface trio, and Second-ever BCW Heavyweight champion ‘Kangeroo’ Denny Kass, Don ‘Cyrus’ Callis, and ‘Christopher ‘Smooth Mover’ Pillon as the heel trio. The match also features former BCW mainstay Otis Apollo as a guest referee, and the return of the company’s ring announcer from 1993-1999, ‘Coach’ Kurt Schneider. D’Amore, predictably, claimed he was far from a “legend” in the wrestling business, but added that the majority of participants in the contest were key members in the early formation of BCW and this was a way of rewarding them — showing gratitude. “For me, watching Mickey Doyle and Denny Kass step into the ring and wrestle, it’s gonna bring back the emotions of what it was like when I was 17-year-old just starting in this business and these guys actually took the time to deal with a snot-nosed, little pudgy, Italian kid from Windsor,” revealed D’Amore. Doyle and Kass will also be honoured as the inaugural inductees into the BCW hall of fame on the night.

The coming together of the anniversary show has inevitably made D’Amore reflect on his favourite matches, moments, and angles in the history of the promotion. One of D’Amore’s most vivid memories comes from his ironman match with WWE commodity Al Snow on the second ever BCW show. “Early on I was so overwhelmed just trying to do what I was supposed to do, but the second show that we ever did, I think it was May 1993, for some reason unbeknownst to me, because I never would’ve done it, having maybe 10 matches under my belt, they had me do a 30-minute ironman match with Al Snow,” D’Amore recalled. “For me it’s one of the greatest memories of my life because I had so much fun and learnt so much. It’s probably on Al’s top 10 least favourite things (laughs). Boy did he have to drag me, he had to fish-hook me, and he had to carry me through it.”

The next of D’Amore’s oh-so-vivid BCW recollections came almost eight years later, on March 7, 2001 to be precise. “Another [favourite] night is when we first restarted after Chuck Fader got sick. We had never really done anything in the past like brought anyone in as a big surprise. And so we went to the ring to have match between myself and Rhyno, and the lights went out and the music hits, and the lights come back on, and there’s Tommy Dreamer standing on the stage. You talk about 1,200 people going bonkers. I don’t know if I’ve ever heard a crowd pop louder than that anywhere. I mean, you talk about a building that just went completely bonkers and they stayed like that through the entire 15-minute match because they couldn’t believe Tommy Dreamer was in that building.”

As for a moment that is indicative of what being level-headed comprises of, D’Amore remembered actions of the aforementioned Dreamer before a 2001 event. “There’s one show I’ll never forget,” said D’Amore. “You talk about people that have egos and people that are egoless. I’m standing there doing something and I hear someone dragging chairs behind me. I turn around, there’s Tommy Dreamer dragging stacks of chairs. I mean here’s a guy that is a star. I mean, he is a big name in wrestling. He’s a former world champion. He’s a guy that practically ran ECW. And I turn around and he’s dragging chairs. And I’m like, ‘Tommy, why are you dragging stacks of chairs?’ And he’s like, ‘Somebody’s got to drag them.'”

While a number of Ontario-based promotions have fallen victim to the rising insurance crisis in the Province, BCW is still going strong because according to D’Amore, “We’re still on a past policy that we signed months ago — right before things really started falling apart.” D’Amore is hopeful that the promotion will continue to be insured in the coming years. “What I’m told is we have a new policy in place so I’m hoping that will continue to be the case. . . I don’t mean this to downplay anyone else, because there’s some very good promoters around Ontario, but I hope the fact that after 10 years and tons of shows, having never once even had anything resembling an incident that that’s part of the reason why we’re still able to get insured.”

As D’Amore and the entire BCW roster get prepared for what should be a memorable evening tomorrow night, it seems only a formality to raise a toast and celebrate a momentous occasion for a little Independent promotion out of Windsor, Ontario that has exceeded all expectations and then some.