LAS VEGAS — In the end, the Dog did have his day. After 44 years in pro wrestling, and an estimated 13,000 matches, the incomparable Mad Dog Vachon was awarded the Iron Mike Mazurki Award by the Cauliflower Alley Club Saturday night at the annual gala banquet at the Plaza hotel. 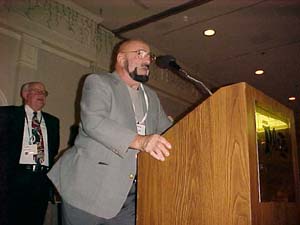 Each year, the Iron Mike Award presentation is the highlight of the reunion. As the only award kept secret from the attendees, the reaction from the crowd is always genuine and heartfelt. As Vachon limped his way to the stage on his artificial leg, supported by his brother Paul ‘The Butcher’ Vachon, his former adversary Bobby ‘The Brain’ Heenan shared his thoughts.

“It’s not just my opinion, but the opinion of a lot of wrestlers around, he’s the toughest human being I’ve ever seen. What this man can take, what this man went through, he’s a man. That’s all I can say,” Heenan said. “They never said this man was short, they said this man was bad. What a great, great entertainer and what a great wrestler.”

Mad Dog proceeded to the podium, and launched into an impromptu acceptance speech. “I used to be a bouncer in a night club when I was 17 years old. They used to come to me from all sides, from all different methods to try to beat me. Sometimes they’d sneak up behind me with a beer bottle. One guy tried to break a bottle in my face. He didn’t know what I knew. I could wrestle.”

A smile crept across Vachon’s face, and he dropped into his trademark growl. “And I could beat the shit out of them. And most of the time I did! That’s eventually when Don Owen called me the Mad Dog. So I carried it inside and outside of the ring. I must have had hundreds of street fights. Why I’m not in jail today is a surprise to me. But let me tell you one thing – yes, you can laugh- but one time I asked Don Leo Jonathon, I said, ‘Leo, did anybody try to pick on you outside the ring, tried to have a fight with you’ He said, ‘Maurice, I usually just talked them out of it.’ “Son-of-a-bitch! You never even have one fight! That’s unfair! It’s a Dog Eat Dog world. That’s the way you do it.”

The Iron Mike Award is named after the Cauliflower Alley Club’s founder Mike Mazurki, who organized regular reunions in the Los Angeles area, where he had graduated from the wrestling ring to the movie studio. “To be the Iron Mike winner, you have to be immediately recognizable. When you walk somewhere, someone’s got to say, I know that guy,” explained Club Executive Vice-President Karl Lauer. “Second, you have to have two professions, and been successful in more than one. Third, and most important, you’ve got to be a very benevolent person, somebody that cares about other people and gives a lot of their heart, their body and everything else. In this case here, a little bit of courage, an awful lot of courage. Probably one of the most inspirational and nicest guys you’ll ever meet.”

The rest of the banquet had many highlights too.

Stampede Wrestling’s Bruce Hart started the evening off by presenting a posthumous award to Rhonda Sing. After Hart touched on the lives of Sing, and his brother-in-law Davey Boy Smith, his speech veered off into a deep, well-thought-out rant against the WWE and the lack of actual wrestling in the sport today. At its best, he said, “wrestling is an art form performed by artists.”

Angelo Savoldi, who started wrestling in 1937, was given the Art Abrams Lifetime Achievement Award. He broke into the sport in New England, but rose to prominence as one of the greatest junior heavyweights ever in Oklahoma, where he held the NWA Junior belt, and battled the likes of Danny Hodge, Hiro Matsuda and Mike Clancy. Upon retiring, he returned to Boston and worked for the WWWF as a road agent. Savoldi was also an early trainer of future world champ Jack Brisco, who was at the banquet. After thanking the crowd, and his four sons, 13 grandchildren and three great-grandchildren, Savoldi left with a memorable line: “You can have a good match, you can have a bad match, but don’t forget the finish!”

The duo of Mike Tenay and Bobby Heenan again were the masters of ceremony for the banquet. Heenan returned after year off to battle throat cancer. The Brain had lost weight and his voice had been altered, but his wit certainly had not gone anywhere. He poked fun at award winners and the all-time largest crowd, while giving props to the men and women he worked with. His best line came after introducing ‘Playboy’ Buddy Rose, who looked slightly above his listed 217 pounds. “Remember the Four Horsemen” Heenan asked. “I think he ate them!”

At the banquet’s close, the great Nick Bockwinkel had everyone pay tribute to Heenan. “If there was a world champion of managers, it would be Sir Robert of Heenan,” Bockwinkel said.

In order, here are the other award recipients and a little about the presentation: