After a 17-year absence from the ring, yet another Rougeau is considering a comeback. 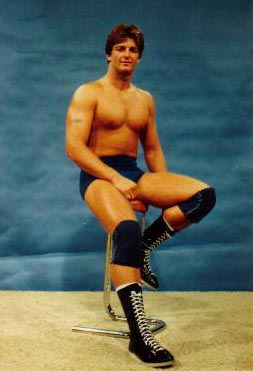 In 1986, Armand Rougeau seriously injured his back and had two discs removed from his back. Under strong advice from doctors, he retired from the ring after a four-year career in International Wrestling, an independent federation based in Montreal in the 1980’s.

But, there was always a doubt in his mind to how far he could have gone in wrestling, especially because his brothers achieved so much success locally and on the international scene with the World Wrestling Federation and World Championship Wrestling.

In a recent interview with SLAM!, Armand admitted that his return on Jacques Rougeau’s Lutte 2000 show back on Dec. 30th 2001 at Montreal’s Molson Center was both exhilarating and relieving.

“I have to admit I was very happy with the match and reaction from the crowd, I didn’t expect to perform as well as I did. After all, it had been 17 years but after hearing the cheers while being anounced, that was the lift I needed to get back in.”

Armand had doubts for months before the show and leading up to the minute he walked down to the ring. He had a long talk with his brother Raymond before the show, and even called Jacques Sr. in Florida. The doubts were gone after Armand himself decided to start the match for the Rougeau brothers.

“I decided to start the match, with the support from my brothers, so the nervousness could be washed off right away, and let me tell you that adrenaline has lots to do with eliminating nervousness. After I lifted Eric Mastrocola ( approximately 230 lbs) he felt like a one-hundred pound wrestler and I knew I was going to be OK and that I hadn’t forgotten the love I had for the sport”.

But that return had been in the works for three years as Jacques had been asking him to return in the early years of Lutte 2000. Even though he loved wrestling and had never stopped light training at the gym, Armand didn’t want to go back in the squared circle just for personal satisfaction

Their father, Jacques Sr., then stepped in and convinced Armand to work one show “for the family tradition”. So after three months of regular training at the gym, and with no pain in his back, Armand thought that it might just be possible to comeback, even if only for one match. So when Armand decided to accept Jacques’ invitation, he did it for both personal and family reasons.

“We have always had a strong family unity in the Rougeau clan, and after thinking about it for a few weeks, I knew it was the right thing to do. Jacques has a good little organization going, and I was just glad to help. Also, seventeen years ago, and after I had signed a contract with the World Wrestling Federation, it was a month before I was suppose to make my debut in the WWF that I got injured. So I always wondered what could have been. Don’t get me wrong, I was really proud of Jacques and Raymond’s achievements, but also very envious at the same time and left wondering if I could have had the same success as them.”

As far his future is concerned, Armand has no timetable or goals for any return in the world of wrestling. He prefers to take it one show at a time, and since Jacques’ federation only has wrestling galas every 6 months or so, he feels he can still help in any capacity that Jacques would ask.

“Would I wrestle again? I don’t know. I loved the experience and felt it was conclusive, but I still don’t feel the need to return full time. My training went quite well, my back responded very well, without any signs of pain. The match was very good, but the door is still open if Jacques still needs me to help. I now feel I can do that in any capacity, whether as a wrestler or not.”