Chris Benoit aching to get back in the ring 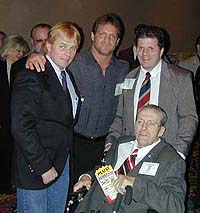 LAS VEGAS — There’s a good side to everything. ‘The Crippler’ Chris Benoit may continue to find himself on injured reserve for the WWF after suffering a neck injury, but there have been blessings for the Canadian star.

For one, he’s gotten to spend more time with his family, including two-year-old son Daniel.

”We’re on the road so much, it’s really hard to have quality time with your family. That’s been really the upside of the whole thing,” Benoit told SLAM! Wrestling at the 36th annual Cauliflower Alley Club banquet Saturday night in Las Vegas.

Benoit had hoped to be ready to wrestle in time for WrestleMania, especially with the mega-event being in Toronto, but after a recent visit to the doctor, May is looking more realistic. “[The doctor] said another couple of months, which was two weeks ago, before I can start bumping again. I believe it’ll be some time in May.”

He’s had to change his workout regimen a bit, but still looked like he could go in a two-out-of-three-falls slugfest in an instant. “I’ve been training hard, been doing cardio and weight-training. There’s nothing else that I can really do with the exception of maintaining a good diet, helping the bones heal quicker. That’s all it is, it’s a matter of the bones fusing together. We took the x-ray and there’s almost like a little hairline fracture that you can still see.”

The Edmonton-native has been forced to think a little bit about life after wrestling. “You always think about what you’re going to do after wrestling. I definitely know I always want to have my hands involved in the business, because I miss it so much. I never thought I’d miss it this much.”

Still, he’s gotten a few opportunities for travel that he wouldn’t have gotten if he was wrestling on the full-time WWF roster. Benoit recently travelled to the Far East with a few other WWF superstars to promote shows there later this year.

Japan was a real highlight. “We went to Japan, Kuala Lumpur and Singapore. It was great to go back to Japan. I saw a lot of old friends. It was neat to get back there and talk to some of the reporters, talk to some of the wrestlers in New Japan that I spent so many years with. Going to those other countries, I’d never been there. That’s a big part of the business that I miss because for so many years I used to go to Japan, to Mexico, to Europe, to Australia, just travelling around overseas. I really enjoyed that part of it. It was good to get back out there.”

Even getting to the Cauliflower Alley Banquet in a run-of-the-mill location like Las Vegas was an accomplishment. “I’ve wanted to come before, it’s just that our schedules have never worked out. It’s an honour to be here. It’s almost humbling to be in the room with all these legends here. I feel like I’m a fan again.”

Benoit was presented with an award for his accomplishments by the CAC, and was introduced by friend and teacher Bruce Hart. He received one of the biggest ovations of the night.

His speech to the crowd was honest and heartfelt. “I’m very honoured and humbled. I childhood dream was to become one of the stars of Stampede Wrestling. Thanks to Stu Hart and his family, well, let’s just say that there’s been a hell of a lot of icing been put on that cake! I get a lot of people asking me, ‘Who’s the toughest guy you’ve ever been on the mat with?’ I remember my time travelling to Calgary on a Greyhound bus when I was 17 years old every weekend to work out with the Harts. While I was down in the Dungeon with Stu, aside from the moans and groans that were coming out of my mouth, the only thing going through my head was, ‘Man, am I glad I missed this guy’s heyday!’ I want to thank Stu Hart and his family. They’ve given me more than I’ll ever be able to repay. Thank you.”

At the conclusion of Benoit’s words, banquet MC Mike Tenay added his own praise to the ‘Rabid Wolverine’. “Bruce Hart is right: The best, in-ring performer the last 15 years, hands down, no question, don’t argue with me, Chris Benoit.”