In Winnipeg wrestling, there are few people that have done as much to promote the business as Joe Aiello.

Aiello, 35, has been a TV announcer for Winnipeg wrestling’s IWA promotion, co-hosts No Holds Barred, a wrestling call-in show on 92 CITI-FM, and operates the Jabroni’s Hardcore Wrestling store.

In coming weeks, however, Aiello will be promoting the wrestling business in a whole new way, as he prepares to promote a wrestling card for the first time.

The show, which will take place on January 30, will feature a tribute to Maurice ‘Mad Dog’ Vachon. Already named to the card are Terry Taylor, Don Callis (Cyrus) and Dr. Luther. Aiello says that there is a void to be filled in Manitoba, where wrestling cards are primarily Winnipeg-based independent workers and WWF shows. “I thought it was maybe time somebody filled that void where they get a chance to see some guys we haven’t seen in a while, and some independent stars we don’t get to see here.” 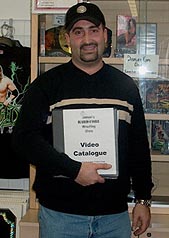 Having Vachon in for the tribute is special for Aiello, who grew up watching the AWA. Vachon is a five-time AWA champion, and enjoyed a lot of popularity when the promotion held shows in Winnipeg. “Winnipeg was such a hot territory for him,” Aiello says.

Aiello started in the wrestling business in the mid-1980s, doing work through Winnipeg promoter Tony Condello for various organizations including the UWF and the NWA. “The first real stuff I did live was with the Ric Flairs and the Stings and Lugers when they were just starting out,” Aiello recalls.

Aiello also got to work with the AWA and Nick Bockwinkel. It was the relationship with Bockwinkel that eventually landed him a job with the WWF. At an IWA television taping, Aiello did commentary with Bockwinkel. A few months later, he received a message form his mother that the WWF had called. “I thought it was one of the local guys pulling a rib, because it was like, ‘why were they calling my mom’s place?'” Aiello recalls.

“Sure enough I call this number and it’s Titan Towers (at the time), and they’re inviting me down for a tryout.”

Aiello was soon scheduled to do some on-camera work, as well as some commentary with former AWA announcer Lord Alfred Hayes. His first gig was at a TV taping in Brandon, Manitoba. The first interview he did was with Rick ‘The Model’ Martel, a man who would later headline several IWA matches that Aiello called. Aiello looks back fondly at that first interview. “A lot of the fans in Brandon knew who I was, of course, from doing the local scene so it was kind of neat to get that applause.”

Originally, Aiello was set to do a two-week fill-in stint for Sean Mooney, who was away for his marriage and honeymoon. In the end, Aiello was offered a full-time WWF contract. Aiello did not take the offer, however, choosing instead to stay in Winnipeg working for radio. “It kind of changed my life a bit, because from somewhere where I could take a couple weeks holidays and do something I would have liked, they offered me a full-time job,” he says. “At the same time I was offered a different job in radio which was full time, so I decided to stay home.”

Upon his return, Aiello went back to work with the IWA. He soon partnered up with Callis, who he has continued to work with on the NHB Wrestling radio show. Aiello says that the partnership and friendship is a natural fit as the two have the same work goals. “We’re pretty much doing everything we’ve done in wrestling together, and followed the same kind of roots and tried to keep it as local as possible,” he says.

The years working together has created a great chemistry. The two ad lib all of their commentary and it flows quite well. “We’ve never planned out a thing in our lives, whether it be calling a match or doing a show,” Aiello says.

Callis will be aiding Aiello in the booking of the wrestling card. Also helping out will be Condello, one of the biggest names in Winnipeg-wrestling history. Aiello is excited to work with Condello again, a man who he says has been like a member of the family. “Tony’s always been like that crazy uncle to me, if not a dad sometimes. He’s always been a guy you shake your head at some times; you almost think you’re living an episode of Twin Peaks, but yet he’s so genuine, as far as how he took me under his wing with no TV experience and gave me a shot, which I will always be grateful for.”

Aiello has also served Winnipeg’s wrestling hunger by operating Jabroni’s Hardcore Wrestling store, the only of its kind in Canada. The venture has been a strong one for Aiello and Winnipeg wrestling fans, as he has had an opportunity to have several wrestling personalities do autograph sessions, including Lance Storm and Rhyno. “Opening this wrestling store has been fantastic,” he says.

At the end of the day, Aiello simply enjoys working in the wrestling industry in any capacity. He’s able to work in an industry he grew up with, one that he has never felt as being a ‘job’. “It doesn’t feel like work,” he says. “It’s just been a lot of fun, and something I’ve always wanted to do since I was a kid, so I’ve just been lucky enough to do it.”