By TIM WOOD — For SLAM! Wrestling

Well, he’s not, actually. But if you’ve seen him work in the ring, you’ll know that he’s certainly worthy of the name. With a crushing spinebuster and a stiff left hand ol’ Ronnie Garvin would envy, CW Anderson is doing his best to carry on the Anderson tradition of brutality on the indy circuit since the demise of ECW. 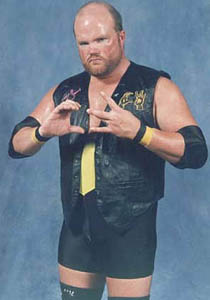 Born Chris Wright in the countryside just outside Raleigh, North Carolina, the man that would someday bear the famed Anderson name grew up a big fan of the National Wrestling Alliance. When asked who he idolized as a child, CW wasted no time in answering. “Bobby Eaton and The Midnight Express,” Anderson told SLAM! Wrestling in a recent interview. “Right up when I got to do my thing with Eaton, I was a big mark for him.” Admiring the work ethic and in-ring talents of the man, Wright decided to enter into professional wrestling when he finished his schooling.

“When I got out of college, I had finished up playing baseball, and was actually just looking for something to do on weekends,” CW recalled. “Some buddies of mine were doing the indy thing around here and they told me just to come out with them, hang out, and see what I thought. I got there early, and they got me in the ring, and we just rolled around and did a couple of things. It took off from there.”

CW began wrestling in the Carolinas roughly ten years ago in backyard wrestling and on the independent scene. He trained at the WCW Power Plant for a year and a half, eventually deciding to depart the facility. “I went through the three days of hell they had,” he stated, “and made it through by the skin of my teeth. After that, it just really got to the point where it was overcrowded there.” With the Power Plant filling up with talent like Lash LaRoux, Mike Sanders, Chuck Palumbo and Mark Jindrak, CW eventually cited too many students and not enough rings to work out in as one of his reasons for leaving. Working a full-time job while attending the overcrowded facility, his interest in continuing to attend the Power Plant waned. Another reason CW cited for his departure was WCW management’s apparent lack of interest.

“All these guys were getting TV shots and stuff like that, and basically, they told me I didn’t have a look, that I wasn’t a great wrestler, and that I would never make it. That was after J.J. Dillon and Paul Orndorff came down and watched us work one day. But Sarge (the WCW Power Plant trainer) loved me to death. He kind of took me under his wing and fine-tuned all my work.” WCW did eventually offer him a contract — sort of.

“They were going to do something with me, like put me on… one of those little cotracts they were giving to all the kids, and I was like, ‘Nah, no thank you.'”

CW did not come by the Anderson name by chance — he was chosen for it. Rocky and Pat Anderson, who used the name by permission on the independent circuit, saw CW wrestling one night under a mask. Approaching him backstage, Rocky and Pat told him they liked his work and his look, and asked him if he’d like to become an Anderson. CW accepted, and was told to grow out his goatee into a full beard. Permission to use the name would come from the late Gene Anderson himself.

“They gave me the spiel about using the name, and not to disrespect it. It was a two-hour conversation…. and to choose a name like Ole, Pat, or Arn. And, God — for two weeks, I was coming up with Ike, and Cal, and stuff like that. And I was doing a TV interview around here, and I told the guy who was doing it, ‘Look, I can’t come up with a name to use as an Anderson!’ And he just said, ‘Oh, we’ll just call you CW’. So they just took my initials, and it stuck, and we went from there.” It was Paul Heyman who would later give him ‘The Enforcer’ nickname in ECW.

It was Heyman, and ECW, who would give Anderson his big break in 1999, when he accompanied a friend to an ECW show in Georgia for the friend’s tryout with the company. “While he was having his tryout, I was standing beside the ring, just watching. He got through, and Nova (who ran ECW’s tryouts) looked at me and asked me if I has my gear. I ran back out to the truck, got my gear, came back in, put it on, and got in the ring with Simon Diamond. Paul Heyman happened to sit down as I was working out.” When he had finished with Diamond, Heyman told Bill Alfonso to have him work another hour. After that hour was up, Heyman met him in the back, and asked him not to leave before speaking to him at the end of the show. Before the show began, however, CW was pegged to tag with Vito Lograsso against Danny Doring and Roadkill in the third match. From there, until the final night of ECW, Anderson remained loyal to Heyman. “After my match, he told Fonzie (Alfonso) to give me a schedule, and said, ‘Welcome to ECW.'”

Having worked with Bill Wiles, Simon Diamond and Johnny Swinger, as well as being managed by Lou E. Dangerously in the New Dangerous Alliance, Anderson is probably best remembered for stepping up into become a key ECW player after upper-card ECW talent departed to the WWF in 2000, and for his match of the year candidate with Tommy Dreamer — the infamous “I Quit” match.

“Well,” Anderson chuckled, “one thing I like to tell people is that ECW was built on tables and barbed wire and stuff like that, but I got there at the building, and there was no barbed wire.” With stores closed on the Sunday, CW sent a ring crew member down the street to cut some off the gate fence of a car lot he had walked by earlier that day. “He comes back,” CW recalled, “and it’s razor wire. And I looked at it and was like, ‘There’s no way in hell I’m using this’. Tommy, he shortened it down, but it was still sharp. So yeah, it was supposed to be barbed wire, but ended up being razor wire.”

CW’s perspective on the fall of ECW is not unique, and echoes the words of many others who, like him, were there to witness the end. “I would say that most people in the locker room still had a good feeling that Paul was going to do something — pull it out and save ECW — because we’d had numerous speeches by him that he wasn’t going to fold, that he wasn’t going to sell out. So we believed in him. And we went out there, and I’m sure it’s no secret that we weren’t getting paid. And we’d still work, because we believed in ECW and the name, and we were such a tight-knit group that we thought we were still going to have a company. And we went out there and performed, and that last night was a very emotional night for me, because basically everyone was saying goodbye. We didn’t know if we’d see each other again, so we were saying our goodbyes, and everyone was all upset, crying, from the camera guys right through Tajiri, Crazy… all of us. And up until I saw Paul on TV for RAW, I thought ECW was going to be saved. I have no idea what happened; personally, I have no idea where the money went or why we went bankrupt… but I just went out and wrestled and did my part.” That final night, barely able to walk due to an earlier injury, CW wrestled Jack Victory strictly out of loyalty to Paul Heyman and ECW. CW had not heard from Paul before this December since the ECW “Guilty As Charged” pay-per-view.

These days, Anderson — ranked at number 112 on last year’s Pro Wrestling Illustrated 500 list, ahead of solid wrestlers like Mark Jindrak, Chris Kanyon and the Haas Brothers — keeps busy on the independent circuit, spending his time primarily in the SWC, but also in places like England, Alaska, Trinidad and Canada. Recently, he worked with Terry Taylor and Scott D’Amore on a Border City Wrestling show, and thoroughly enjoyed the experience. He hears rumours every once in awhile about himself heading to the WWF, ranging from the company simply scooping him up to being pegged for a reformation of the Four Horsemen. CW has no illusions.

“You know, they’re letting guys go left and right, and they have so many as it is. Why would they hire me? I’m not a bodybuilder, and I’m never going to have a bodybuilder look like those guys got. I thought I was just going to work my ass off, and that might help me get over there. Who knows? If it does, I’ll do it. If not, I’m not going to sit there and complain I’m not up there.”

He also keeps busy with his wrestling school, which he has run for five years in Smithfield, North Carolina, and which he recently named “The Anderson Academy.” His successful students include Lodi and Chilly Willy, and and he has several more on top of the indies on the east coast. “I just really like training kids that enjoy being in in this business and have that desire, like I did when I first got into it.”

Today, CW Anderson remains one of the bigger names and more respected figures on the indy scene. Wherever he ends up, it’s a certainty that he’ll continue to entertain as one of the hardest workers in professional wrestling.

And why not? After all, he’s an Anderson.