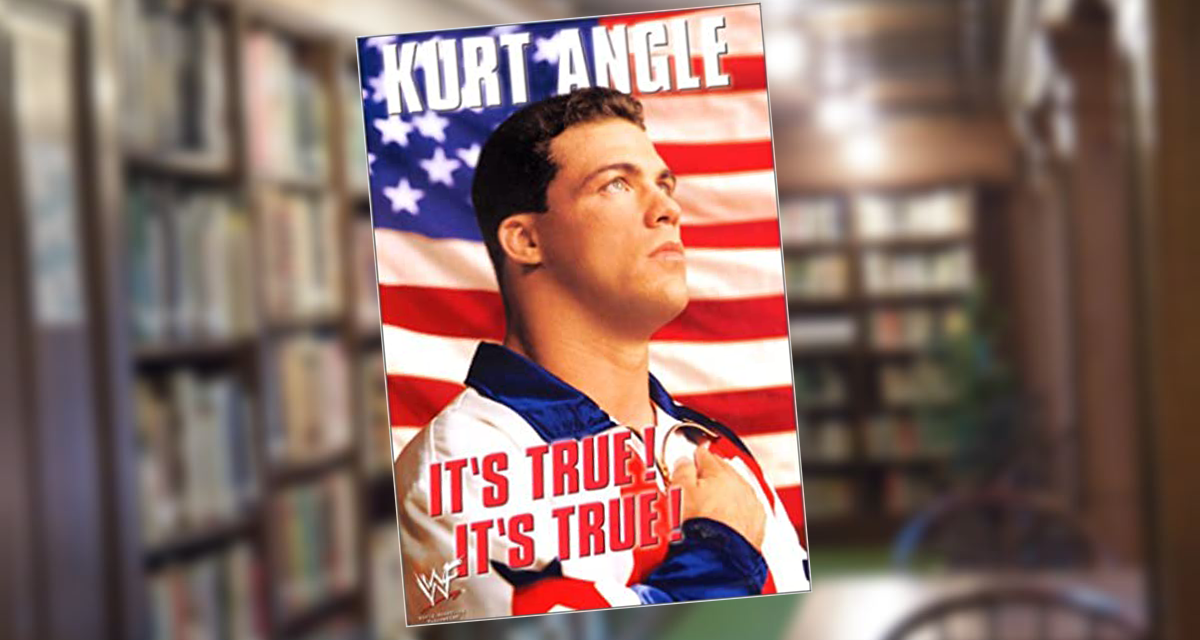 By PERRY LEFKO — For SLAM! Wrestling

Of all the current World Wrestling Federation superstars to climb the latter to success, Kurt Angle has certainly done it the fastest.

So, it shouldn’t come as any great surprise that the former amateur wrestler, who won a gold at the 1996 Olympic Games, has become the latest WWF star to come out with a biography. His book, entitled It’s True! It’s True! chronicles his life growing up in a dysfunctional family — his father was an alcoholic, one of his brothers had to spend time in a juvenile facility for fighting and his only sister had a child at age 16 — but overcame it with hard work and desire to become a celebrated Olympian and later a champion in the WWF.

Angle grew up in a blue-collar suburb just outside Pittsburgh, and constantly had to prove himself to his four older brothers, who all wrestled, and his hard-nosed father, David, a construction worker who never drank on the job but drank considerably at home. At age 14, Angle lost his father, who died two days after suffering multiple injuries in a fall at a construction site. Despite his father’s death, Angle played in a high-school football game two days later and the fullback/linebacker had the game of his life to that point. While he had football scholarships opportunities, they came from schools outside of the state and he wanted to stay close to home. Instead he pursued wrestling scholarships, but rather than go to Penn State, he chose Clarion, a small school with an excellent wrestling program.

Angle became a college star who developed into a national champion and Olympic-team member, yet he had to endure mental and physical challenges along the way. His mentor, Dave Schultz, a celebrated Olympic gold medalist, was shot and killed by the crazed owner of the state-of-the-art gym where Angle trained. The owner, who loved wrestling and built his facility specifically for wrestlers to train, suffered from paranoia and believed Schultz was out to get him.

That same year, Angle severely injured his neck in the U.S. nationals, only five months before the Olympics. He cracked his vertebra in two places, had two bulging disks and four pulled muscles. His doctor prescribed six months rest, but with only two and a half months to the Olympic Trials Angle was desperate, even knowing he risked paralysis if he re-injured his neck. Three doctors told him the same thing, but a fourth doctor prescribed regular injections of a drug to free his neck and dull the pain. Because of his obsession to make the Olympics, Angle took the injections, even though looking back on it he wondered,”What the hell was I thinking? Getting those injections was probably the stupidest thing I could ever do.”

He overcame his injury to win the Olympic Trials and subsequently won the Olympics, although he was nearly eliminated early in the competition.

What happened afterward can be described as the American dream, with a perverse story line. Angle was recruited by the WWF, seeking to cash in on his fame as an American hero, but he wanted no part of that kind of wrestling career. He had never watched a show and he was deplored by a mock crucifixion he witnessed when asked to be a guest announcer at an Extreme Championship Wrestling show. Ironically, the ECW owner, Paul Heyman (a.k.a. Paul E. Dangerously) now works for the WWF and one of the wrestlers in the crucifixion act, Raven, is now employed by the WWF.

Angle’s disgust for wrestling changed some two years after the Olympics when he watched a RAW IS WAR show on television and was impressed by the entertainment and athleticism. At this point, Angle had been struggling as a neophyte sports reporter at a Pittsburgh television station, and had been disgusted by some of the attitudes of the professional athletes, some of whom he knew from his athletic days. He called the WWF, and while interest had cooled on Angle by then he still received a tryout.

The rest, as they say, is history. Through hard work and dedication he made it to the ring quickly and successfully, eventually becoming a main-eventer and champion. But, he had to endure doubts from his family, former fellow amateur wrestlers and his fiance about his decision. Moreover, the decision by WWF owner Vince McMahon to use Angle’s character as kind of a haughty goofball espousing his three I’s — intensity, integrity and intelligence — and his trademark line — “it’s true,” which was adopted from motivational speeches he gave — turned his image from good into bad. But, Angle never lost sight of the fact it was only an act, even though some people took it the wrong way.

While the book, written with John Harper of the New York Daily News, does not match up to Mick Foley’s epic Have A Nice Day!, it is a step up from some of the other WWF bios that have flooded the market. This book gives you great insight about Angle’s determination and desire and the great lengths he went through to overcome some troubles in his personal and professional life.

It also gives you an insight into the whole business of wrestling, such as how story lines and characters are developed, why some performers are considered great workers and others dangerous because they are unskilled. In fact, Angle broke the arm of another performer, Bob Holly, by failing to execute a high-flying maneuver. Even though Holly forgave him, Angle felt bad that he took six months off Holly’s career and what effect his mistake would have on the other wrestlers. It took him eight months before he could convince another opponent to allow him to do the move again.

While giving of himself in the book, Angle comes across at times as a shill for McMahon, who has clearly given him a push to make him the fastest-rising feature champion in the business.

What’s interesting about the book is that Angle suggests that he might want to make a comeback for the 2004 Olympics. That would be eight years since his retirement, but as we all know these days even when an athlete hangs up his equipment, it doesn’t necessarily means it’s really over.

Either that, or it’s just another angle from Angle.