The short career of Wojo The B.C. Hulk

The wrestling career of Adam Yawrenko is one of ‘what might have been.’

At six-foot-eight, 310-pounds, and a collegiate basketball player, Yawrenko oozed potential when he first broke into wrestling in 1984 with Al Tomko in the Vancouver-based All-Star Wrestling promotion.

But two years later, he was out of the business completely, having suffered a health scare so severe that returning to wrestling was simply out of the question.

Seventeen years later, Yawrenko is on the line from Terrace, B.C., mulling over those ‘what-could-have-beens’ with SLAM! Wrestling. 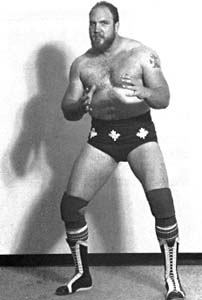 Adam Yawrenko as Goliath in an Austrian promo photo.

Born in Vancouver, but raised in Abbotsford, Yawrenko was a wrestling fan growing up, watching the All-Star antics of Gene Kiniski, John Quinn, Bulldog Bob Brown, John Shields and Ron Morrier with his grandmother. “I used to love to go to the wrestling when it would come to Abbotsford,” he said.

Being big was part of his family. “I come from big breeding stock,” he said with a laugh. His size has always been a problem, especially when shopping. “I’ve been this size for a long-time now. I realize it’s mail order and wait. And if you find something that fits, you don’t care what colours but how many.”

After high school, Yawrenko went to a community college in Washington state to play basketball, then came back to play for the University of British Columbia Thunderbirds. He got a job with B.C. Telephone Company, and one of his co-workers was Davey Brown, who moonlighted as Vancouver’s fight commissioner. Brown recommended that Yawrenko consider wrestling.

“When I quit university, I started lifting lots of weights. He looked at me and asked if I had ever thought about being a wrestler. I refused to even think about it at the time. I started watching it on TV again and started to think, ‘Hey I could do this even if it’s real!’,” Yawrenko said.

Having changed his mind, he got in touch with Kiniski through Brown. According to Yawrenko, he was told ‘You’ve got a good job, forget about it, you’ll have to move to Calgary.’ (Kiniski was involved in Stampede at the time.)

Local promoter Al Tomko was on an overseas tour, but when he returned, he saw gold in Yawrenko.

“When he came back, he immediately wanted to meet me and threw me on TV,” Yawrenko said. Tomko dubbed him ‘Wojo’, in an attempt to capitalize on Yawrenko’s Ukrainian background.

That first night was pretty memorable for the newcomer.

“I will never forget my first night on television for Tomko’s All Star Wrestling. I wasn’t smart yet and Al sent me out to do an interview. Tim Flowers came out to disrupt my interview with a pitcher of water.

“Well, I didn’t know Tim or anything about pro wrestling so I took off after him because I figured no pip-squeak was going to ruin me on TV before I even get a chance to prove myself. I not only took off after him, I chased him through the whole BCTV studios trying to give him an education he’d never forget.

“When we made it back to the change room, all the boys … were in stitches. Poor Tim was in a rage screaming at Tomko that I could have killed him and that I should have been smartened up before sending anyone out with me. Tim was right because I had BAD INTENTIONS when I went after him.”

Following that debut, he trained on the mats and in the ring on Saturdays. “They didn’t smarten me up, they didn’t do anything. They figured they had the next Don Leo Jonathan, which is what they were trying to push for.”

In his in-ring debut, January 9, 1984, he beat Precious Peter Flowers, then went into a battle royale and won that as well. Wrestling was just entering another boom period continent-wide, and Yawrenko immediately got a lot of attention from the local press. “The media just took to me, being a local boy from Vancouver, well-spoken, athlete, college-educated. I wasn’t your run-of-the-mill, beer-bellied, missing-three-teeth kind of a wrestler.”

Moose Morowski and Paddy Ryan groomed and mentored him. “[Ryan] hated Tomko’s guts, but he would come out and work with me because he saw the talent there,” Yawrenko said.

There wasn’t that much talent left in the All-Star promotion at the time, Tomko having booked himself on top. “I would just match up with the Moose every Saturday so he could get DQ’d, so he could beat the sh*t out of me and see what I was made of.”

Tomko would dub Wojo, Wojo The B.C. Hulk to take advantage of Hulk Hogan’s burgeoning superstardom. “Tomko was the promoter. He might not be much of a promoter, but he’s a real human being,” Yawrenko said. “For some of the people I worked for in the business, he was one guy that did have a heart. I think he was too soft. He really didn’t do much for me. He was one of the promoters that always wanted to be going over.”

There was only so much that Yawrenko could learn in B.C. “I was really, really held back it seems because they wouldn’t let me do what I wanted to do. You weren’t allowed to fly back then. A guy my size was supposed to just be a big, strong guy.

“I never really had a chance to be me until I got out of Vancouver.”

In January 1985, Yawrenko went to South Africa (booked through Morowski) and got to be a bad guy for the first time, dubbed Goliath. “It was quite strange, my first time being a heel going from 200 to 300 people in Cloverdale to 8,000 in Cape Town opening night.”

Morowski had prepared him well. “I felt comfortable with my skills,” he said. “The Moose is the one that taught me. He says, ‘You don’t have to do much, but what you do, you have to do well.'”

South Africa provided many memorable moments. One night in Durban, he incited a riot. “They stabbed a cop trying to get me. They smashed every window in the building. The cops came to apologize, saying that they called for re-enforcements, gas and dogs to try to get me out of the building.”

On another night, live bullets were thrown at him in the ring, one of which he kept as a souvenir. “For someone who hadn’t been in the business very long, it was quite an eye-opener.”

Unsure about the possibility of a long career in pro wrestling, Yawrenko had taken a leave of absence from the B.C. Telephone Company in 1985, having pre-booked himself for tours of South Africa, Europe and Japan. “I wasn’t going to give up a good thing unless I knew I had a sure thing.” It turned out to be a wise decision, and he’s been with the company 22 years now.

He explained how his career came to a screeching halt. “Near the end of my Vienna tour, I got deep vein thrombosis and I actually had a blood clot come out of my leg, through my lungs, into my heart, in the ring. I just about died in the ring.”

Yawrenko spent 28 days in a Vienna hospital with tubes stuck in him. “When I came back to Vancouver, my specialist told me that if I continued to wrestle, he would refuse to treat me. I pretty much had to give it up.”

For eight months, Yawrenko went to therapy and took blood thinners. He’s never had another attack, but has to wear a support sock for the rest of his life.

Though his career ended, some good did come out of the events in Austria — he met his wife, Barb, there. “I call her the war bride of ’85,” Yawrenko said with a laugh. “She visited me every day in the hospital.”

Ironically, Barb wasn’t much of a wrestling fan. “She had a girlfriend who was a wrestling fan. She figured what better to do on a night off than go watch a bunch of guys of good shape and tights.”

His wife’s Austrian roots has meant that he has returned to the site of his attack. The first return was nine years after, and he was still recognized by some fans.

Just before he left for his overseas tour, the WWF had come to Vancouver for the first time as a part of their growing empire. “Moose took me down. I met Pat Patterson, [Angelo] Mosca was there, the Giant, Iron Sheik, Adrian Adonis. … They were already grooming me. They wanted me to go overseas before I’d come in so I could solidify my character,” Yawrenko said. “Again they saw some talent and ability there because of my mobility for my size.”

He’s still a fan today, but there is a big case of ‘What If?’ that haunts him as well. “When I see some of the big kids that have come in there and stuff, and I say, ‘God, what could have been.’ On the other hand, being 44 years old and having the aches and pains I have from previous sports, and the pro wrestling, and looking at the style now, I’m saying ‘Really, I could be a in a soupline someplace too.’ … The demand on the guys’ bodies now. It’s not like the longevity careers that the guys were doing. When I broke into the business in the ’80s, you were training and working out, the style was that you could still do it when you were 50.”

Like many wrestlers, Yawrenko still has it in his blood, and helps the NWA-affiliated Extreme Canadian Championship Wrestling out when they come to Terrace by postering around town. “[ECCW co-owner Michelle Starr] keeps trying to get me in the ring, the young bugger. And one day he might get a surprise! They keep trying to run an angle with me and I keep telling me to leave me alone or I’ll quit bringing the smoked salmon and the beer to the change room.”

All joking aside, there is a void in Yawrenko’s life, but he doesn’t dwell on it. “I really do miss it. But I think the fortunate thing for me was that I always did have a good job to go back to. The business didn’t own me.”

Oh my, I flashed back 14 years tonight.
About three years after the demise of New Brand Wrestling, a few of the guys who broke in there were able to work territories and would pass through my place in Winnipeg. It was a very interesting era, since there were basically no shows in Winnipeg at the time but my place was always full of good workers watching tapes and sending out promo.
In the fall of 1987 Wojo came to town and hung out with the guys, one of whom was a very new talented young man who shortly thereafter became known as Eddie Watts, who was full of rapt interest as Wojo told his stories from Tomko, South Africa and other exotic climes. His tragic illness brought him love, but it also cut short a talented performer and took a loyal and good-natured friend out of the locker rooms.
He encouraged all my friends to try and get work around the world, and he helped open doors for them. He would look at me and bellylaugh and say “hey, Horowitz”, and at the time I didn’t get the rib because I had not seen Barry work and I had the long curly hair (not that I could work a lick then), and I’d say “I’m not Horowitz”, so Wojo kept laughing, but I think he liked me anyways.
That was so many years ago and I still remember him and his wife so clearly. I wish them all the best.
Marty Goldstein, Los Angeles, Ca.