Legends to come out in Halifax for WrestleFest

Big Stephen Petitpas has a bit of a warning to the fans who will be coming out to the Real Action Wrestling WrestleFest 2001 Saturday in Halifax at Exhibition Park.

At the moment, Petitpas and The Beast are scheduled to step in the ring once again, teaming up in a match with Stompin’ Paul Peller as the referee. But the 43-year-old Petitpas doesn’t want fans to get their hopes up. He’s just back for one match, and he certainly can’t go like he used to.

“We’re not taking it too, too serious. We’re just going to go out there, and more or less, it’s our way of saying thank you to the fans for supporting me all these years. I don’t think there will be too many big bumps,” Petitpas said with a laugh. 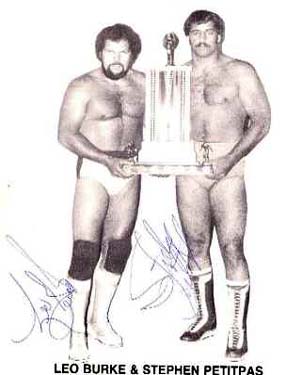 Stompin’ Paul Peller was a little in the dark about what will be happening this weekend. Like Petitpas, he was contacted by Buddy Lane to come out for the event but he didn’t know too many of the details of the show. “I hear the whole crew is supposed to be there,” Peller said. “Some of them I haven’t seen for quite a while.”

Lane has been a regular on the Real Action Wrestling circuit this year, a Maritime legend who still laces up the boots on a regular occasion at 45 years of age. He has helped Real Action promoter Warren Olsen organize the legends part of WrestleFest.

“What we’re trying to do is give something back to the fans,” Lane said. “If you give a guy like The Beast, Steven Petitpas and Paul Peller time to come back, whether they draw a crowd or not, it gives them time to reflect.”

Younger Real Action wrestlers like Todd “The Bod” Douglas, “Iron Man” Cliff MacDonald, “The Natural” Bobby Rude and “The Kowboy” Mike Hughes also get a chance to benefit, thinks Lane. “If you can learn one thing from them, then it was worthwhile bringing them in here.”

Real Action promoter Olsen knows that the visit will benefit his younger stars, but for him, it’s mainly about giving something back. “Many of our own fans remember when Maritime Wrestling was on TV every Saturday night. For us, it’s a way to let our fans have a little nostalgia by getting the opportunity to meet and see some of these guys who have meant so much to wrestling in the Maritimes, as well as provided so many memories to all the great wrestling fans of the Maritimes.

“It is an opportunity for Real Action Wrestling to pay its respect to some of the men who forged a history of professional wrestling in the Maritimes. These guys, along with the likes of Leo Burke, Cuban Assassin, the late Killer Karl Krupp have made it possible for us to run professional wrestling in the Maritimes, because there was an existing market for it. People here appreciate good Maritime Wrestling and entertainment. But I feel it is more accepted here than in other parts of the country, because these guys along with so many others, have been doing it for decades.”

The FanFest and Hall of Fame Exhibit opens at 4 p.m. Saturday at Exhibition Park, and live bands will be playing. Fans will get a chance to meet the stars of yesterday and today, browse through some memorabilia and stories (including some of the SLAM! Wrestling Canadian Hall of Fame features) and more. The wrestling show will follow that night.

It will certainly be fun for Petitpas, even if his in-ring performance won’t compare to his epics of the past. “I’m kind of looking forward to it because I wrestled for 21 years,” he said. “I’ve been away for five years, I haven’t seen anybody. I’m looking forward to seeing the boys, seeing the fans. It’s a great way for me to say thank you for supporting me.”