Christian has an Edge over the competition

Heading into what may be the most important match of his career, Christian (Jay Reso) doesn’t appear to be fazed by the hype.

The current World Wrestling Federation Intercontinental Champion is set to defend his title in a ladder match at this weekend’s No Mercy pay-per-view against Edge (Adam Copeland) his former partner and (for storyline purposes) brother.

In a media conference call yesterday, the Orangeville, Ontario native discussed what could be considered a match-of-the-year candidate once the smoke clears on Sunday night and has an idea of what to expect. 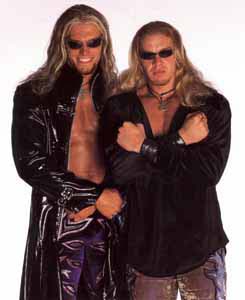 Edge and Christian in happier times.

“Fortunately for me, this isn’t the first one that I’ve done,” he said. “The very first one (against the Hardy Boyz at the 1999 No Mercy pay-per-view), I didn’t know what to expect. Now, I pretty much know what to expect going into it. The thing I try to do is not think about it too much. Right now, I have a few days off so what I’ll do is just be relaxing. Try not to think about it too much and not try to psyche myself out. I just want to go in there with a clear head and hopefully no one gets hurt.”

Since the initial WWF ladder match at WrestleMania IX between Shawn Michaels and Razor Ramon, several WWF wrestlers have taken a step beyond in each one that followed. Christian and his former partner Edge (Adam Copeland) along with the Hardy Boyz have been able to redefine the concept into a spectacle which often is the highlight of any pay-per-view.

While a ladder match can pose great physical risks to its participants, Christian appears to be quite confident going into his first major title defense.

“There’s always the risk of permanent injury,” he said. “I’ve been in enough of these ladder matches to know how unforgiving the ladders can be. The ladders seem an awful lot higher when you’re up on them than how they look when you’re on the ground. It’s a long way to fall. A few times I’ve actually fallen off the ladder, over the ropes to the floor. I guess the biggest thing you have to be aware of is the risk of getting injured, and you have to be aware of that at all times and try to know where you are and where your opponent is and the ladders are, which is hard to do.”

When it all comes down to it, Christian often avoids thinking about the situation before going into the ring for a match of the calibre.

Christian doesn’t want to put too much pressure on himself to surpass earlier ladder matches, Christian hopes to at least meet the standard he has help set. He noted that of the jaw-dropping moves from ladder matches are done on the fly, but he was able to sum it all up.

“As far as excelling in them (ladder matches), there’s always going to be high spots and high-risk moves and things of that nature.”

Edge and Christian had been one of the top tag teams in wrestling prior to the King of the Ring pay-per-view when Edge won the tournament, essentially setting up a solo career. In a time when booking appears to be done on the fly, this angle was built up over the summer culminating in a spectacular heel turn for Christian on the September 3 edition of RAW is WAR in Toronto.

While he enjoyed working with Edge as a team in the past, Christian appears to be enjoying his burgeoning solo career.

“It worked out great that it was actually done in Toronto,” he said. “It was really emotional. We had been together for three years in the WWF and well before that. We had a great run as a team and accomplished a lot together and things like that. It was emotional and it was sad. I’m kind of opening a new chapter in my career, and it’s also scary. I’ll look back on it as one of those nights that I’m kind of at a loss of words for. I guess you could say that it’s more of a different feeling than I’ve ever had before in my life.”

The turn came to little surprise to wrestling fans and Reso felt it was the right time for it to happen.

“Going from something that works to something new is a little risky,” he said. “At the same time you don’t want to see it fail in the fans’ eyes. They’ve seen our thing for a few years now, how much longer can it go? You never know. It could have gone another three years or another one. You don’t want to risk the point where you get stale and you break up and nobody cares. In this business you always have to change, you always have to stay fresh. You constantly have to be aware of that. It has been an adjustment. I feel like I’m doing well with it, I feel comfortable with it.”

In the past, Christian had wrestled against Edge several times. However, he doesn’t feel the split should be compared to other notable breakups such as those between Shawn Michaels and Marty Jannetty or Bret and Owen Hart.

“I don’t like it to be compared to anything, whether it’s the Marty Jannetty-Shawn Michaels turn or the Owen Hart-Bret Hart situation,” he said. “It’s different… I don’t know what the situation was with Shawn Michaels and Marty Jannetty, so it’s tough to compare it to that and I think Edge and I will both do very well as singles. I think we’ve both got good work ethic and things like that, so I don’t think we’ll settle for anything less as singles.”

When he first arrived in the WWF, Christian was a heel as a member of the Brood with Edge and the since-departed Gangrel. The heel change has allowed him to further develop his character without making him feel uncomfortable.

“I just don’t try to force myself into something. I just do what I feel I would do in a certain situation. The Edge and Christian stuff, that was just us being the way we are… this is a little different.”

On a recent edition of WWF Smackdown!, Christian joined the Alliance. While the Invasion storyline has been criticized by many wrestling fans, he hopes to add credibility to the faction in upcoming weeks.

“I don’t think it’s too soon (to join),” he said. “I think that there’s not a whole lot of established guys in there, so I’m an already established WWF performer going over there. I feel like I’m bringing something over to the Alliance. I think I’ll get more mic time and that sort of thing. I don’t think that will take anything away from what I’ve done now, hopefully it will help the Alliance storyline.”

When asked if he felt if there was too much talent in the WWF locker room, Christian had difficulty answering the question.

The future is certainly looking bright for one of wrestling’s young superstars. He hopes he will be able to get in the ring with top WWF talent including Chris Benoit, Chris Jericho and The Rock. While he appears to be open about where his character is taken over the upcoming months, he is sure that one aspect of it will not borrow from his days as Edge’s tag team partner anytime soon.

“At this point I don’t see comedy in my immediate future, not with the way the turn went,” he said. “I don’t think it would fit in with what I’m doing right now. Not to say that it would never come back, though.”