By TIM LORIMER — For SLAM! Wrestling

Unlike most others on the independent wrestling scene, Todd Fenwick, aka Rockford 2001, views himself as an entertainer rather than a wrestler. He also views the business as entertainment, not wrestling, and he loves to entertain the crowds. “I could go out there and entertain every night, I love the crowd reaction, it’s the biggest rush.”

The veteran of the west coast rings knows he’s not the best technical wrestler around, but he feels that technical wrestling isn’t his job — entertaining is. “Our job is to go out and entertain the fans, that’s what they pay for when they buy their tickets,” Fenwick told Slam Wrestling.

He feels his combination of old school and hardcore wrestling, along with his most recent character adjustment as the CEO of the PBC (Playboy’s Club) adds to his job of entertaining. His wife even escorts him to the ring as his valet, Freedom. 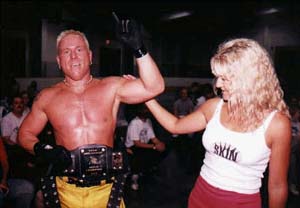 His wife has played a bigger role in his wrestling career than valet though; she was the reason for him getting into the business. “She was going to become a wrestler until she was in a car accident. After that, she took me to a show and I figured I could do it. Ten years later, here I am.”

Before wrestling, Fenwick played football for 14 years in a B.C. junior league, was a Canadian junior all-star four years straight, tried out for the B.C. Lions and Hamilton Tiger Cats and played semi-pro ball in Bellingham, Washington. Not only did that help prepare him for the physical aspect of pro wrestling, but also for the mental. He was trained by Michelle Starr and Tim Flowers and thanks to football, he didn’t have any trouble with the intimidation involved in his schooling. As he puts it: “I was used to the bulls–t Marine stuff from football. Intimidation doesn’t cut it with me.” With his schooling done, Fenwick was off on the road, but he quickly found out how little he had learned. Rockford says he was taught very little from Starr and Flowers and was even under the impression that the business was real while in training. He credits the long van rides while touring with wrestling legends Bad News Allen and Superfly Jimmy Snuka for teaching him most of what he knows today. He also views these trips as the highlight of his career, getting to listen to all of the stories from true greats.

For ten years now, Rockford has toured the Pacific Northwest working with groups like ICW, CWF and ECCW, holding such titles as the NWA World Junior Heavyweight championship, the CWF tag team championships with Thunder Warrior and he is the current NWA Vancouver Island Heavyweight champion. He even made an appearance on WCW Thunder, along with fellow ECCW wrestlers Michelle Starr, Ladies Choice and Juggernaut. His favourite feud to date was with “Tornado” Tony Kozina, who he credits as being the best worker ever. “I feel that God short-changed Tony by not giving him size. If he was bigger, he’d be a millionaire.” 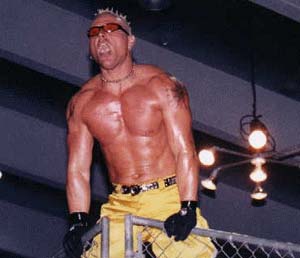 There’s also the infamous dark side to wrestling, backstage politics and back stabbing, something which Rockford knows all too well. He says that too many guys are out there only for themselves and feel they have to try and hold others back to get there. It’s these types of things that have made him think seriously about getting out of the industry.

If he were to leave, he would have no shortage of work to keep himself busy. Aside from owning his own business, selling pipe, he’s also landed a role on the FOX TV series “Dark Angel”. Ironically, his character’s name is “The Hulk.” It’s a small part, but it could grow into something larger. Fenwick also has some commercial auditions lined up, and it’s these possibilities that have him thinking even more about leaving.

But that brings us back to the original topic of entertainment again. Despite obviously not liking the politics and back stabbing, Rockford loves to entertain. And it’s that love that will keep him in the industry for now. He would also like the opportunity to wrestle in other countries such as Japan, Mexico and Australia. He pointed out that he once had the chance to go to Japan, but that it was “kaiboshed” soon after. He also has not ruled out a shot at entering the World Wrestling Federation. While he has not yet had any talks with them, when asked if he thinks he could get there, he answered with an emphatic “yes”. And what better place for Rockford than the biggest platform in the industry to do what he loves best? Entertain.