TORONTO – It’s minutes after the WWF’s WrestleMania 18 press conference and Jim Ross is standing all by himself.

Meanwhile his boss, the larger than life Vincent K. McMahon, has a herd of reporters shoving cameras, tape recorders and microphones in his face clamouring for a quote. Ross curiously looks on as the media grills the WWF owner.

I’m a mere five feet away. I seize the opportunity. I call out to Ross and he looks in my direction before heading over. I immediately introduce myself: “Hi Jim. I’m John Molinaro from SLAM! Wrestling.”

Ross’ face immediately lights up and he sticks out his hand and we shake.

“Great to meet you, John. How you been? Nice to finally put a face to the name.” 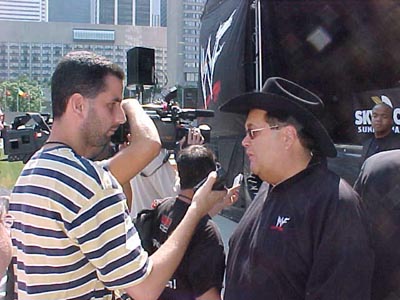 Funny how life turns out some times. A year ago, I was persona non grata by Ross after an editorial I wrote questioned the WWF’s media policy. Twelve months and two dozen phone calls exchanged between us later, Ross greets me like an old friend he hadn’t seen in years.

He may live in Connecticut, but he is, underneath it all, a southern gentleman.

With the pleasantries exchanged, I fire off a few questions for the WWF’s Senior Vice-President of Talent Relations.

You guys clearly botched the WCW invasion angle from the beginning and introduced ECW into the equation to save the storyline. Are you happy with how the angle turned out and where it’s headed?

“I’m very pleased with the creative,” answered Ross. “The ‘Alliance’ issue has been a very stimulating storyline. It has obviously peaked the enthusiasm of our viewers again. It’s new, it’s fresh and now it’s just up to us to keep it creatively stimulating, which is always hard to do when you’re doing two, two-hour shows a week. It’s challenging.”

With the buyout of WCW and the signing of a lot of new talent, you have a lot of new faces in the company. What’s the locker room atmosphere and morale like?

“It’s really come together beautifully,” stated Ross. “I’m very proud personally of all the guys and ladies for creating a very positive environment. The new people that came in came into a positive environment and they have done nothing but add to that. And it’s getting better. They’re building relationships like any other co-workers in any other environment. They’re building relationships and I think over the course of time it’s really going to pay off because of the chemistry they’re going to have.”

Ross may be Vince McMahon’s right hand man and isn’t without influence in the WWF power structure, but he still gets simple pleasure from doing live play-by-play on RAW is WAR. He’s asked by another reporter whether or not he’s happy with the WWF’s commentary teams and gives a surprisingly candid answer.

“I think we’re always trying to get better and trying to improve. I enjoy working with Paul Heyman. I think he adds a unique facet to our show. J.R. and Michael Cole together sucked, which we knew, but that’s the hand we had dealt at that time. Tazz is still a work in progress. The effort is there, it’s just not a real easy job for someone to just go sit down and do. Certainly, Paul is doing a great job. I think we miss Jerry Lawler. He did a great job. I enjoyed working with him personally and you never know how that whole situation is going to change. I just hope the guy in the black hat gets to keep his spot.” (laughs)

“What about WrestleMania 18?” I ask. “What does this mean for the city of Toronto with regards to its relationship with the WWF?

“It’s our commitment to the fans of Toronto that the WWF considers Toronto one of our primary cities,” stated Ross. “The fan base here is extremely enthusiastic and loyal. I think it’s a validation that Toronto in our view is one of the major sports cities in the world.”

“I think it’s a part of our commitment that Canada is extremely important to the overall success of our company,” continued Ross. “By placing our biggest event of the year in Canada, I hope anyway, it indicates we’re committed and we believe in our fan base here.”

But why Toronto? What does it have the other cities don’t?

“The city itself offers a lot of opportunity for our fans to come from around the world. I think last year we had fans from 20 or 30 countries,” revealed Ross. “The SkyDome is very unique in as much as we can set a lot of folks in there. So we think the facility has some unique characteristics, the city itself does and the fact that we keep it in North America and bring it back after twelve years, we believe it’s the right thing to do.”

Wasn’t the poor exchange between the Canadian and U.S. dollar a deterrent? Did that ever enter the decision making process?

“There’s nothing we can really do about it. It’s an economic issue,” explained Ross. “Anybody that would have a problem with that, we’re certainly going to make up for it in volume because we plan on breaking the attendance record and we’d like to certainly get close to that 70,000 mark this time, which would better what we did in the Astrodome this past year.”

We’re told by a WWF p.r. member there’s only time for one last question and Ross is asked by another reporter about his general health in light of the hectic and demanding work schedule he keeps.

“I’m holding up well, thanks for asking. I think if I wasn’t so passionate about my job and being around these fans and getting this adrenaline rush once or twice a week… it keeps you rocking and rolling. I’d like to think I’m not getting older; I’m just getting better.”

Ross is quickly ushered away for a scheduled TV interview but not before he shakes my hand again, thanks me for coming out to the press conference and tells me to call him later this week when he’s back in his office in Stamford.