Wrestlemania to be in Toronto

WrestleMania XVIII will be in Toronto at the SkyDome on Sunday, March 17, 2002.

Thousands of rabid WWF fans showed up to celebrate the announcement, some as early as 4:30 a.m.

“I’m proud to be in Canada and Toronto on this historic day,” said WWF VP of Talent Relations and announcer Jim Ross, who acted as host for the press conference. 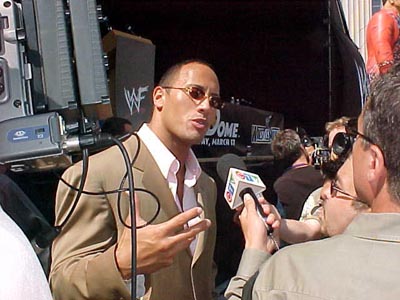 The Rock at the press conference. — Photo by Greg Oliver

Tickets for the show go on sale Saturday, November 3, 2001. Ticket prices were not released, though ringsides are expected to be at least $600 Canadian.

The WWF said that the Fan Axxess convention-style celebration of all things WWF will take place March 14 – March 16 at a location to be named later. Speculation is that the Fan Axxess will be held somewhere on Toronto’s Exhibition grounds, as many of the better known facilities like the Metro Convention Centre are already booked.

Mayor Lastman got a mixed review from the crowd, and tried out a couple of the The Rock’s catch-phrases, his voice cracking in the attempt. “It’s going to be great for our economy, it’s going to be great for our Sick Kids Hospital,” Lastman said before ending with a catch phrase of his own — the ‘Noooobody’ slogan from his son’s Bad Boy Furniture stores in the Toronto area.

Ontario premier Mike Harris wasn’t the tweener with the audience that Lastman was; he was solidly the biggest heel of the afternoon, drawing the heaviest boos and the loudest ‘asshole’ chant of the day. His speech, obviously written for him, had numerous errors including his promise to “lay the smack” and that he’ll be cheering for the only Toronto born WWF star, Edge.

In contrast, Vince McMahon was hailed as a hero by the fans in attendance, and there were some ‘Vince for premier’ and ‘Vince for mayor’ signs in the crowd.

“I’d like to thank you all for inviting WrestleMania to Toronto,” McMahon said. “This will be the greatest WrestleMania of them all.”

The fans were also solidly behind Winnipeg’s Chris Jericho, Toronto’s Trish Stratus, the Undertaker, Kurt Angle and The Rock. Not as popular were heels Shane and Stephanie McMahon and Booker T.

Over huge with the crowd was Hunter Hearst Helmsley, who has been out of action because of injury for some time now. “WrestleMania. Toronto. I’ve been gone a while. A lot of people around here think they are safe,” said Triple H. “They are going to meet the Unstoppable Force … at WrestleMania, The Game begins.”

Stone Cold Steve Austin was introduced by his wife, Debra, and proceeded to complain about having to come to Toronto. “I don’t want to be here, but that’s where they booked the event,” he whined.

The Rattlesnake tried to lead the crowd in a rendition of ‘The Star Spangled Banner’, which met with the predictable results — Chris Jericho telling him to ‘Shut the hell up’ and leading the crowd in ‘O Canada’.

This marks the second time that the WWF’s showcase event is being held in Toronto. It was last at SkyDome in 1990, and the Ultimate Warrior beat Hulk Hogan to win the WWF title in the main event of that show.

The WWF is broadcasting RAW is WAR live from the Air Canada Centre in Toronto tonight, and Smackdown! is also live Tuesday night from the same facility.