DDP getting a bang from WWF days

Diamond Dallas Page is riding a wave of excitement as he begins his tenure in the World Wrestling Federation.

Page, a former multiple World Championship Wrestling title holder, was one of several wrestlers whose contracts were bought out from Time Warner/AOL after the company sold WCW to WWFE earlier in the year. 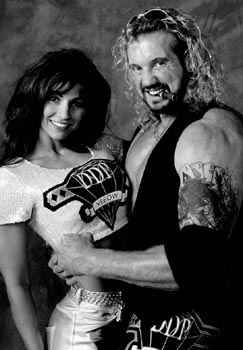 The choice for Page to join the WWF was an easy one. “I wanted to be part of it,” he said. “I couldn’t have made a better choice.”

Page was one of the first WCW wrestlers to appear on WWF television, revealing himself as the stalker of Undertaker’s wife. Page was excited when he heard that he would be revealed as the stalker. “I was floored,” he said, adding that unmasking himself on WWF RAW is WAR was “one of the best moments of my career.”

Working with the Undertaker and his wife Sarah upon entering the WWF has been an enjoyable experience for Page. He describes the Undertaker as having, “this presense about him” while Sarah is “a natural at what she does.”

Page’s own wife, Kimberly, has yet to appear in the WWF, however. Kimberly was an active participant in WCW as both a manager and as part of the “Nitro Girls”. DDP does not expect his wife to be a part of the WWF, as the women play a more physical part in the Connecticut-based federation. “I don’t really see that, but in wrestling you never know,” he said.

While Page is wrestling for the first time in the WWF, it is not the first time he worked with the organization. At Wrestlemania VI in Toronto, DDP was the driver of a 1962 pink Cadillac (his own car) that drove ‘Rhythm and Blues’, Greg ‘The Hammer’ Valentine and the Honkytonk Man, to the ring for a performance. The opportunity came from Pat Patterson, who wanted to use Page’s car as part of the entrance. Page saw an opportunity to get is name into wrestling circles, and took it, seeing it as, “another cog in the wheel to get to your destination.” 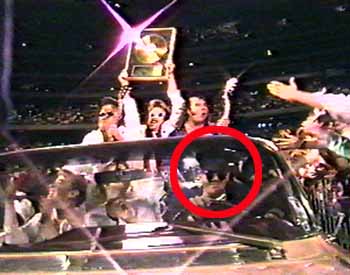 Diamond Dallas Page drives Greg Valentine, Jimmy Hart and the Honkytonk Man to the ring at WrestleMania VI in Toronto in 1990.

Page began his career as a manger in the now defunct AWA as the manager of Pat Tanaka and Paul Diamond. It wasn’t long before Page found himself with a spot in WCW, originally as a manager of the Fabulous Freebirds, then the “Diamond Studd” (Scott Hall).

Soon, however, Page found himself in the wrestling ring. After teaming with “Vinnie Vegas” (Kevin Nash), Page entered singles competition, and he won his first title belt, the WCW TV title, on September 17, 1995. Page would add several other championships to his collection, including holding the WCW championship on three occasions.

Now entering the twilight of his career, Page sees himself being active in the ring for two more years, but realizes his time as a pro wrestler could end at any moment. “Every match could be my last match,” he said.

After he hangs up his boots, Page would like to continue his work as a motivational speaker, as well as make a move to being behind the commenting table. “I would love to be a colour commentator down the line,” he said.

“That was my original dream.”