Past follows Shawn Michaels around

Shawn Michaels has been out of wrestling since 1998, but fans still talk about him and his impact on the business three years after his last fight.

“Since I have walked away, I have had more people talking about my matches, had more people comment on the influence I had on the wrestling business,” he told Slam Wrestling at a press conference in Winnipeg on Friday to promote the WWF show in town on October 6.

Michaels, known to fans as “The Heartbreak Kid”, or simply “HBK”, has been described as one of the best wrestlers ever to step foot in the squared circle. His high-flying manoeuvres and high-risk style brought him many accolades as an innovator of North American wrestling. Michaels is flattered by the title. “You’re just trying to work hard and think of new stuff and nifty stuff, and all the sudden someone’s calling you an innovator,” he said. 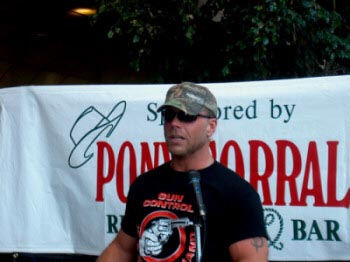 Shawn Micheals on Friday at the Pony Corral in downtown Winnipeg. — Photo by Jon Waldman

Michaels, a former three-time WWF Heavyweight Champion as well as Intercontinental, European, and Tag Team title holder, had several highlight matches in his career, including matches with Sid, Mankind (Mick Foley), and the first-ever Hell in a Cell match with the Undertaker. No matter his opponent, Michaels always tried to have his best match possible. “I tried to make all of them my best match, and I hope that’s why so many different individuals say, ‘I had my best match with Shawn,’ because I was always trying to do that with them,” he said.

Michaels worked with many different wrestlers during his career, but highlights times working with friends Kevin Nash (Diesel in the WWF) and Scott Hall (Razor Ramon) in the ring. “That was a lot of fun because you’re out there with your buddies,” HBK said.

Michaels also enjoyed working with the late Owen Hart. He feels that working with Owen was good because the two of them were able to do a variety of things in the ring without a lot of planning. “Owen and I always had a great time because he and I pretty much could do anything.”

Much of Michaels’s career was spent working in programs with Bret ‘The Hitman’ Hart. The two had several encounters throughout their careers in the WWF, including tag matches (Michaels as part of The Rockers with Marty Janetty, Hart as part of the Hart Foundation with Jim Neidhart), and various bouts for the WWF Intercontinental title and Heavyweight title, highlighted by their “Iron Man” match at Wrestlemania XII.

Michaels feels that his battles with Bret throughout his career helped in his development. “Me and Bret got to do different stuff at different parts of our careers, when we were both younger and when we were both older,” he said. “That was such a great learning experience and so much fun.”

There were, however, stories of problems between the two. Michaels feels that the reports of locker room tension were greatly exaggerated. “The whole story behind he and I was bigger than it ever actually was.”

The last match between the two was at the Survivor Series in 1997, when Vince McMahon abruptly ended the contest, handing a submission victory to Michaels without Bret giving up. The incident, dubbed the “Montreal Screwjob” has become a much talked about part of both of their careers. While Michaels has put the incident behind him, he is still asked about it. “It was a big thing. It’s always going to come up.”

Michaels has not spoken with Bret since the Survivor Series, but he would welcome the opportunity to. “I’d be more than happy to sit down with the guy and talk, and I’m pretty sure he feels the same way.”

Michaels had his last match against ‘Stone Cold’ Steve Austin at Wrestlemania 15. After his retirement from active ring competition, Michaels stayed involved in wrestling. He spent time as both an on-screen and off-screen personality for the WWF, and has in the past owned a wrestling school and an independent promotion, the Texas Wrestling Alliance.

Recently, however, Shawn has distanced himself from the industry. He sold his wrestling school, and has not been on WWF television for quite some time. “I got out of every aspect of wrestling,” he said. “I’ve been doing it and involved with it since I was very young, and I wanted to start new things.”

Much of Michaels’s time is now dedicated to his family. He spends as much time with his wife and one and a half year-old son as possible. “I have one thing I have to do and that’s be good to them,” he said.

The time away from the ring has allowed Michaels to look back on his career, and realize how much of a commitment he made to the business. “When you get away from it, you have a chance to gain a little perspective on life,” he said. “It’s very tough, demanding job you’re doing everyday, all the time.”

“Your whole life is wrestling.”

Now aged 36, Michaels is still a part of the WWF, having signed a three-year contract with them in March. While he feels that he cannot work another match, he will always look back on his time in the ring fondly. “I always liked wrestling,” he said. “That 20 or 30 minutes I was in the ring is what I enjoyed.”