It’s a mild spring night in Winnipeg, Manitoba. The Aboriginal Centre, located in downtown of the River City, is buzzing with anticipation, as the Indigenous Wrestling Alliance gets set to put on a show that features former WCW and ECW wrestler Lance Storm. By the end of the night, however, those in attendance will be talking about another wrestler on the card, one who will put his body on the line, in a way only few have done before.

His name is Sean Dunster, though he is known in the ring as Massive Damage. Just a couple minutes before the show, he seems relaxed. A smile creeps over his stubbled face as he talks about tonight’s highspot. The plan calls for Cyborg, a seven-foot-three-inch monster of a man, to interfere in Dunster’s match against Eddie Watts, and put him through two tables. 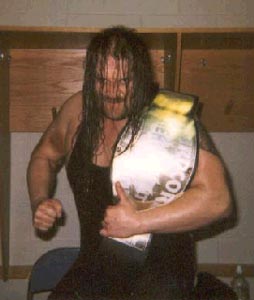 As he talks about his match, he proudly displays battle scars from a Japanese Death match with the legendary Leatherface that occurred not even a week prior. He and Leatherface have worked together on several occasions, and have become close. “For me and Leatherface, half of it is that we’re comfortable with each other,” he says.

Dunster is quick to point out though that their friendship is left behind when they enter the ring. “My character and that character hate each other,” he says. “We try to hurt each other.”

Dunster received his training from Leo Burke and Bret “Hitman” Hart, spending a lot of time in Hart’s house learning the business. Dunster believes that Burke is the best in the industry. “He (Burke) taught me everything,” he says, adding that Burke especially helped in developing his ring psychology.

“Leo’s also kept me realistic. He said ‘you’re very talented, but you many never get to go anywhere.'” Dunster says, adding that Burke told him, “‘Don’t ever give up your dream.'”

Dunster’s dream of pro wrestling has taken him to most of the Canadian indy promotions — Hardcore, Can-Am, Grand Prix, IWA, POW, Canadian AWA, and some minor indies in the States. He’s currently on tour with Real Action Wrestling in the Maritimes.

As soon as his match starts, the soft-spoken Dunster becomes a louder, more aggressive man in Massive Damage. Damage walks to the ring with a shopping cart full of weapons that will be used during the course of the match. The character combines the intensity and look of Rhyno with the suicidal moves of Sabu. While Dunster is mindful of keeping his character and real life separate, he admits that at times it is hard to keep them apart. “I try to keep it away, but when I get mad I notice I do things that Massive Damage would do,” he says. 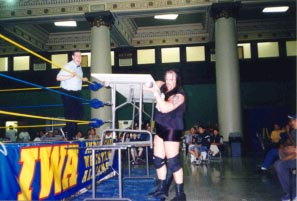 Massive Damage gets the tables ready during an IWA show. — Jon Waldman

Damage uses a lot of hardcore materials in his matches, including many moves involving trashcans, chairs, barbed wire, and fireballs. He sees the objects as being more of a crowd pleaser than dangerous items. “I tend to do more spots into garbage cans and chairs, or suplexes on chairs because it looks so incredible,” he says.

After a few minutes of the hardcore brawling, Damage heads to the outside and stacks two tables. A trail of fans follows him as the tables are carefully placed on mats outside the ring. “It’s a total rush,” he says of his high-risk spots. “It’s a euphoric, a natural high.”

Soon, Cyborg makes his entrance, interrupting the match. After a few moves, Cyborg steps out onto the apron, holding Damage by his neck. Quickly, Damage is lifted into the air and slammed through the tables. The spot draws “oohs” and “ahhs” from the crowd, while officials rush to Damage’s aid.

One of the people who come out is IWA promoter Tony Condello. Condello has worked with Damage several times, finding Dunster in his native Saskatchewan, and soon booking him for IWA cards, thinking that, “here’s a guy that will be good for hardcore matches, and sure enough he’ll do anything anywhere any place as far as hardcore wrestling’s concerned.”

“I’ve seen the guy hurt so many times, if he was any other wrestler, he’d be off conditioning for a period of time; but this guy keeps going going and going no matter how much he’s hurt,” Condello says.

After the match is over, Dunster assesses his wounds. Bruised knuckles and damage to the back of his head are the only signs of injury; standard fare for the 30 year old. Tomorrow he will be doing this all over again, despite any ill effects from his injuries.

“I’m the toughest professional wrestler you’ll ever meet,” he says. “If I break an arm, if I break a leg, if I break some ribs, if I’m bleeding all to hell, I’ll show up the next day ready for work. Might not be the best match I’ve ever had, but I’ll still throw 100% into my matches.”

I my fondest memories of Massive is a show I worked with him up in Edmonton for Can/Am Wrestling. Massive was wrestling and I was the ref for the evening. He was supposed to lose this night, so he went out and still put on one of the best matches of the entire night. He is a true professional and real gentlemen outside the ring. So congrats to Massive for being inducted into the Canadian Wrestling Hall of Fame. You deserve it man.
Squigy Magoo

I just saw Damage in a R-A-W show where he had to fight against Bloody Bill for the hardcore championship, he didn’t win that night but he is now the R-A-W hardcore champion.
Christopher Gilchrist

I feel it’s appropriate to mention a few things about the man you know as Massive Damage, and I know as Massim. I was first introduced to the business by Sean four years ago, having graduated from the same high school as him and trained at the same gym. Once he saw my vast interest in breaking in, he taught me the basic bumps and some simple spots, and soon got me booked for another indy promotion out of the province. I didn’t realize at the time how much of a favour that was to me, as I had only had four matches at that stage and those types of guys usually are relegated to working local shows. Soon after, I had the good fortune of getting booked by Tony Condello on his Death Tour & working tag matches with the Dream Warrior against Massive & Chi Chi Cruz. This is where I learned how to work, and I owe this to Massive and Cheech for guiding me through those matches as well as introducing me to debauchery.
Wavell Starr