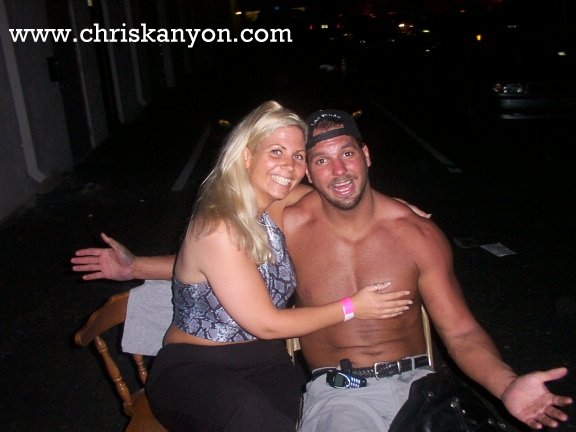 Chris Kanyon goofs with a friend in a photo from his website.

While Chris Kanyon waits for the call he hopes will come soon, the call from the WWF or new WCW offering him a job, he’s keeping himself fairly busy. When not updating his web site commentary at “chriskanyon.com”, he’s working a variety of independent wrestling shows, which helps keep him familiar with fans. “It’s good to get out there, keep reminding the fans who you are. If you’re not on TV for a while, people forget.”

It’s a win-win scenario when a wrestler with his stature appears on an indy’s marquee. “It’s my living, after all. And if it helps out the promotion, then that’s great too. If I can come in for one shot and put a shine on their guys, put them over, then that’s great, it’s work. If I’m going to be there more than once, then we can work an angle around it, and that helps the draw the next time.”

Still, he knows enough to realize that a successful independent promotion can only go so far.

“You’ve got to have TV. You need money from a TV contract to compete. If not, you can’t go national. And if you don’t do that, then you’ll have no chance of being first. And wherever I end up, I want them to be first.”

Another hobby he may consider getting back into is movie-making. During his time in WCW, Kanyon consulted on the sets of The Jesse Ventura Story, a made-for-TV movie shot mainly in Toronto, and in the Hollywood feature Ready to Rumble.

“Movies, if you can believe it, are more cut-throat than wrestling. It’s big pressure. Actors have to read for parts, and then after the movie’s done, they’re unemployed again. There’s only so many jobs out there, and they’re all after the same ones. It’s a tough business.”

Still, it’s an experience he wouldn’t mind taking on again.

“I would love to hook up with Vince McMahon and help him move towards that, movies and TV. That was a fun time.”

He’s most proud of his work on Rumble, for which he helped design the triple-cage used in the movie’s climactic main event scene. “I loved being part of that, it was a lot of fun to put together the match for that movie. And it was great to help construct that cage.”

The construct, three cages one on top of each other, was even used at WCW’s Slamboree 2000 pay-per-view event, where in a frightening spot, Kanyon was thrown off the top, landing hard on the entrance ramp below.

“It was actually pretty safe,” the wrestler said, despite impressions at the time that the resulting paralysis angle was not entirely untrue. “We planned it and practised it over and over, and got it right pretty early.”

Using Mick Foley’s infamous Hell in a Cell dive as inspiration, Kanyon set out to do something equally impressive looking, yet much safer. “I figured the best way to do that was to land on a much bigger target and a much softer target… I liked the rampway. On the Saturday, I practiced it with empty cardboard boxes. By the third or fourth time, we got it right. For the show (on Sunday), we put plywood down on the ramp and covered it with carpet. It was more solid, and it looked better, too.”

The only injury of note? “My lower back was sore, but that’s about it. Yeah, there’s always a risk, and there’s always fluke tragedies. But if you do it responsibly, do it correctly, hopefully things will go well. As far as that bump goes, I have no regrets. It made for a good show.”

It’s that mentality, that level of commitment to the audience, that Kanyon hopes will take him back to the big leagues. “It’s hard to come up with interesting things to do on TV. That’s what I want to bring to the WWF or WCW. I’m innovative, I’m a hard worker, I love this industry. That’s what I want people to see… and soon.”

— with thanks to “Dynamite Kid” Dave Steele