Chris Kanyon has re-discovered his love of wrestling. For a while there, “The Innovator of Offense” wasn’t so sure he still had it in him. Hating the company he worked for, he spiralled into depression for a period of about four years. The business he was once so passionate about, the business that he had wanted to be in since he was 14 years old, was sucking the life right out of him. 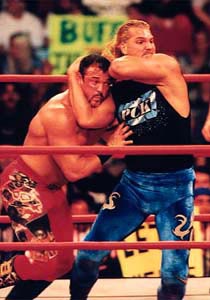 ‘Positively’ Kanyon grabs Buff Bagwell by the head during their match at the New Blood Rising PPV in Vancouver, B.C. on August 13, 2000. Bagwell won the ‘Judy Bagwell On A Pole Match’. Photo by Rik Fedyk

But now things have changed.

Putting the negative experience of WCW behind him, Kanyon has joined many of his former colleagues on the independent circuit. “I’m starting to remember why I got into the business,” he told SLAM! Wrestling while preparing for his match at a recent Border City Wrestling show. “It’s fun to be back in it, which is a feeling I haven’t had in a long, long time.”

While many may feel that working the independent circuit is a step downward after main-eventing in WCW, Kanyon doesn’t think that’s necessarily the case. “Yeah, there’s problems in the independent shows. But that’s where you have the choice. You don’t take the booking if you have a bad experience. If (the promoter) cancels at the last minute, or they try to (avoid paying) you, you don’t ever have to work for them again. With WCW, I didn’t have a choice. It was bad for a long time, and I couldn’t do anything about it.”

“Working there gave me a negative attitude. When we were losing (to the WWF), I took it personally. It tore my heart out… I blamed myself. I almost quit the business. But then I realized it wasn’t me that was the problem.”

As bad as WCW once was, Kanyon feels that the perfect ingredient has been added which can give it a new lease on life and bring it back to its past glory. “Vince McMahon is a genius. He did it before, he’ll do it again. Look, in the early ’90s, (the WWF) had The Goon on TV. They took names and made them into household names. He knows the business, he knows what people want to see. He can do it.”

For Kanyon’s part, he would love to be part of the new WCW. “I met with Jim Ross a month ago, but I’ve had little contact since. I’m hoping to sign, it’s always been my dream to be in the WWF. But then again, I also really want to be a part of the rebuilding, and help bring WCW back to the top.” (Apparently things are going in his favour — he was reportedly backstage at RAW in Tampa, FL Monday night.)

— with thanks to “Dynamite Kid” Dave Steele