After more than a decade in the squared-circle, Winnipeg’s Chris Jericho returns home with the opportunity to win the World Wrestling Federation Heavyweight Title from “Stone Cold” Steve Austin, this Sunday at the Winnipeg Arena. 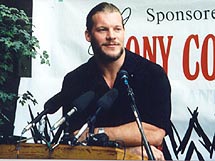 Chris Jericho fields a question today at a press conference in Winnipeg. — Photo by Jon Waldman,

For Jericho, the Wininpeg Arena holds a special place in his heart. He grew up watching several wrestling events at the arena. “It’s a very heart-warming experience for me and hopefully for all the people of Winnipeg,” he said.

“It must be kind of cool to see somebody who grew up here, and paid the dues here, and then been around the world ever since and then return [home].”

Jericho, real name Chris Irvine, began his wrestling career in Winnipeg at the age of 17 as a part of the ring crew for promoter Bob Holliday. Holliday recalls that, “when he (Jericho) wasn’t riding in the back of the van, setting up or taking down the rings, he was picking the brains of the legendary Baron Von Rashcke.”

Jericho soon began wrestling for local promoter Tony Condello, who was famous for his “death tours” up to Northern Manitoba. “We’d go up in a van and travel for 12, 15 hours, one way over frozen lakes to reservations and perform in front of 30 people,” Jericho says, adding that the tours were, “a good way to pay your dues.”

Jericho, 31, feels that the tours were extremely beneficial in his development. “It gave us respect for what we have and discipline,” he said, “and appreciation for the wrestling business.”

Ted Irvine, Jericho’s dad and former player in the National Hockey League, is proud of his son’s ability to make it through the early years of his career. “Chris has paid his price and paid his dues,” he said. “I’m very proud of the fact that he stuck with it through downtimes and uptimes.”

As Jericho readied himself for his debut, he came up with the idea of being the WWF’s “Millennium Man” while at a post office. “I saw a ‘countdown-to-the-Millennium’ clock, and I thought that would be a great for a guy coming in,” he said.

Jericho debuted in the WWF in August of 1999, and quickly became a main attraction for the Stamford-based organization. Soon after his debut, Jericho found himself wrestling his first match at the Winnipeg Arena on August 21. Jericho subbed for The Rock, whose plane was delayed in Miami. Jericho was originally supposed to do an interview, but was soon informed that he would be in the main event. “I was a bad guy at the time,” he said. “I was going to cut a heel (bad guy) promo on Wininpeg, but then I ended up being the returning hometown hero.”

Now Jericho re-enters the Winnipeg Arena, preparing for a match for the Federation’s biggest prize, the WWF Heavyweight Title, already being one half of the Tag-Team champions with Edmonton native and long-time friend Chris Benoit. He feels that this opportunity is a monumental moment in his career. “It could be a pinnacle for my career if I walk out of that arena with the championship.”

THE CARD (subject to change):

Three-team Tag Elimination The Dudley Boyz vs. X-Pac/Justin Credible vs. The Hardy Boyz

Tickets are still available for the show. Card begins at 6pm CST at the Winnipeg Arena.