A fourth generation of Rougeau debuts

Jacques Rougeau Jr’s Lutte International 2000 has never stopped believing in itself and with a goal of producing family oriented shows, last night’s card was no different. 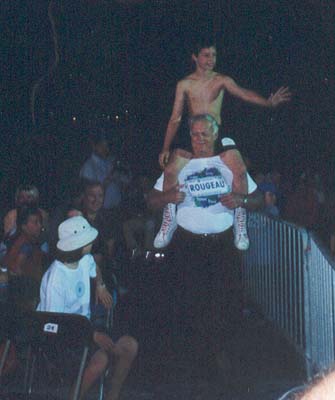 In front of a disappointing crowd of approximately 3500 at the Verdun Auditorium, the show got under way half an hour later. As usual, Jacques’ marketing efforts can be seen as Flanelle, a local FM radio station mascot (C.K.O.I.) and Mr. Potato Head made a short appearance to entertain the younger crowd.

Marc Blondin of RDS fame entered the ring to read out the long list of sponsors, with the help of Cedric Rougeau, one of Jacques’ sons.

Many posters could be seen in the crowd, showing that a fan base is being developed, much to the delight of Jacques and his students from his wrestling school.

Once all the announcements were out of the way, the first match pitted midget wrestler Little Broken against Jacques’ 12-year-old son J.J., who was making his professional wrestling debut. J.J came to the ring on Jacques Rougeau Sr’s shoulder, under a tremendous ovation from the crowd. After the first few minutes, it was obvious that the family wrestling genes were well transferred to him as he surprised everyone in attendance with suplexes, body slams and great timing and even had the appropriate facial expressions. Although the match only lasted five minutes, J.J. showed he had learned well in Jacques’ wrestling school and even won the match with a flying leap from the top rope “a la Superfly”. This kid certainly pleased the crowd and his father as Jacques leaped onto the ring to celebrate with his son. 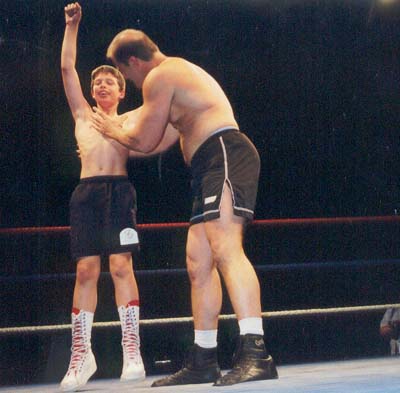 The next match had Bull Dozer, the construction worker, against Dow Jones, who showed up to the ring with briefcase and talking on his cell phone, apparently closing a financial deal. The bout was a very good one with Dow Jones stalling often by getting out of the ring and making more calls. Ultimately, Bull Dozer won with a clean pin.

The third match was one to watch. On last Dec. 29th’s card, a wrestler by the name of Crush was barred from participating, as he allegedly injured four of his fellow wrestling school students. Last night, he went up against “The Kid” Kevin Steen, the high flyer of Jacques’ students. This was an excellent match, with the beast stopping many of the Kid’s high flying moves, dropkicks and even picking up the Kid and throwing him on the cement floor. But after a tremendous drop kick from the Kid, he went back to the top rope for a flying somersault and the win.

The last match before the intermission had Serge “Le Gladiateur” Demers and another 17 year old student, Manuel, up against the much hated team of Handsome Blond and Goregous Mike. After whipping the crowd into a frenzy against them, they proceeded to break all the rules in the book and kept the much bigger Gladiateur out of the ring, while they worked over the much smaller Manuel. Gorgeous Mike won the match by pinning Manuel, with the help of the ropes and weight of partner holding down his legs.

Following a brief intermission, it was time for the veteran students to showcase their ability with Eric “Viva Italia” Mastrocola against Mike “The Dragon” Lyons. This was a fierce battle with many reversals, highflying moves and its share of uppercuts and 2 count pins. These two put on such a great show, it wouldn’t be surprising to see them in an exchange program with other independent American federations. They clearly have a future in the business and certainly have the charisma to take them further. After a seemingly clean pin by Lyons, the referee turned his decision as Mastrocola apparently had his leg on the rope. While Lyons was arguing the call with the referee, Mastrocola took advantage to score the victory.

Next up was one of the two “big events” of the evening, and big it was. Pierre-Carl Ouellet, at over 300 lbs faced Serge “the Prisonner” Rolland at a huge 460 lbs. Pierre made his usual impressive entrance on a noisy motorcycle with pretty valet and pyros flying across the rafters. He then took the mike to thank all his fans, Jacques Rougeau and also to remind all in attendance about the upcoming special wrestling event with Jimmy Hart and Hulk Hogan as main organizers, coming in September. The match was filled with lots of power moves, and clotheslines by both, with the ring moving every time one grappler was thrown to the ropes. Rolland often threw Ouellet out of the ring while preventing him from re-entering. After many body slams and high-risk moves, Ouellet won the bout with a top rope flip and a thunderous crash on the mat for the three count. The crowd gave Pierre a standing approval as he drove out with his valet.

Finally, it was time for the long awaited main event featuring Lutte Internationalle 2000 heavyweight champion Jacques Rougeau (with the Johnny Rougeau belt) and manager Jimmy “Mouth of the South” Hart against King Kong Bundy, who had Amanda Storm in his corner. Jacques and Jimmy Hart made their entrance first, waving the Quebec and Canadian flags only to take the microphone to promote the up previously mentioned show. Hart also spoke about his friendship with Jacques and his appreciation of Montreal and its wrestling fans. Bundy’s entrance was equally impressive with Storm waving the American flag and yelling insults to the crowd. This match saw the advantage change hands often as the much bigger Bundy crushed Rougeau in the corners numerous times only to see Jacques attempt, unsuccessfully, many body slams, only to fall with Bundy over him. Even Hart tried to help his protege by getting on Bundy’s back only to see the big man back him up against the turnbuckle and fall down heavily apparently winded and injured. It was then that Rougeau came alive and finally slammed Bundy for the three count. Although the match was short, around 7 minutes, the crowd seemed to enjoy it thoroughly.

As the lights went on in the auditorium, Rougeau came back to thank the fans and signed autographs for an hour. The crowd appreciated the personal touch to end the show and their general feelings were positive towards the family-oriented show. Yes, there were some pyrotechnics that failed to go off, the attendance was lower than expected, but the fans leaving the auditorium had a great time.