Another Rougeau to enter the ring

Say hello to the fourth generation of Rougeau in the pro wrestling business.

Thursday, in an indoor flea market on the east side of Montréal, Jacques Rougeau held a press conference to showcase his upcoming Lutte International 2000 show, at the Auditorium de Verdun on June 1st, and to introduce his son, Jean Jacques Rougeau, who will follow in the family footsteps.

The afternoon was started by famed French Canadian wrestling emcee Marc Blondin, who recalled a brief wrestling history of the Rougeau family. First, there was Eddy Auger (Johnny and Jacques Sr.’s uncle), who wrestled for Eddie Quinn 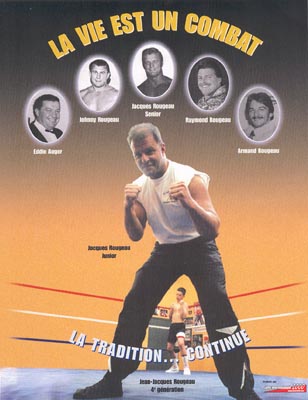 , from 1947 to 1972. Then Johnny Rougeau was remembered for his incredible career and achievements that spanned to four decades. Unfortunately, those two are no longer with us.

Then, Jacques Rougeau Sr., who at 71 looks in great shape, was introduced, along with Raymond and Armand. Finally, Jacques was welcomed to thunderous applause by the 300 people in attendance.

After Jacques Jr. introduced his wife, Josée McMann and his three sons, young Emile, Cédric and Jean Jacques, he made the surprise announcement that his son J.J. would be on the June 1st card against Little Broken, a French Canadian midget, well known here in Québec. At 12 years old, J.J. was introduced as the fourth generation Rougeau to enter the wrestling world, a rarity in any sports.

Recently, Lutte International 2000 had a wrestling card in Mont Laurier, a town of 8,100 just 238 km north of Montréal, and had an excellent turnout of 2,000. So overwhelming was the response, Jacques Rougeau took 50% of the net profit (app. $7,000) and returned it to the Mont Laurier minor hockey association. And it’s with that wave of popularity Jacques Rougeau wants his federation to focus in the upcoming months, that is, travel throughout the province and hold wrestling cards, promoting his students from his wrestling school, and presenting a “family value filled old fashion wrestling show”, without the extra curricular shenanigans from the major leagues. He also made a vow to return a portion of the profits to local organizations if he gets the support from the population.

Apart from the Little Broken vs J.J. Rougeau match on the June 1st show, Bull Dozer will go against Dow Jones, the 17-year-old sensation “The Kid” will be up against Pascal “Crush” Brisson, then the only tag team match of the evening featuring The “Gladiator” Serge Demers and Manuel vs. another 17-year-old student, Gorgeous Mike with partner Handsome Blond J.F.

A special attraction will be ‘Black Stallion’ Eric Mastrocola against Mike Lyons. Pierre Carl Ouellet, who looked to be in grand shape, will get on the ring against one of the biggest wrestlers to come out of Quebec at 460 lbs, The Prisoner Serge Rolland.

The grand finale of the evening will put Jacques Rougeau with ‘The Mouth of the South’ Jimmy Hart in his corner against his long time nemesis King Kong Bundy with Amanda Storm in his corner.

As a genuine gesture of respect, all his student wrestlers in training were unanimous in stating the utmost admiration for Jacques Rougeau Jr. Bull Dozer, 31, has been training for four years and had his first match after only four months of training. He wrestles for the love of the sport, although he realizes that at his age and with his limited experience, he has little chance for any major wrestling career.

Gorgeous Mike and The Kid are young enough at 17 to have big time hopes but fully realize they have many years of training and matches ahead of them. They are willing to take their time and follow Jacques’ rigid training sessions for that ultimate goal.

To end this spectacular press conference, Jacques Rougeau made another surprising announcement. In conjunction with Jimmy Hart and Hulk Hogan, a five-match card, to be shown world wide, is planned for September 2001. Should the show succeed, a federation based with similar family value entertainment, without all the hardcore and partial nudity of some of the big leagues would be formed. A long-term possibility of exchanging talent certainly exists, especially when the close friendship between Jacques Rougeau and Jimmy Hart is well known.

With his endless strings of quality sponsors, great production value, skillful local talent and usual top notch class act show, we should be treated to a great show on June 1st at the Auditorium de Verdun, with tickets ranging from $20 ringside and $15 elsewhere, and $10 for those 12 and under. On his last card on December 29th, there were 4,000 in attendance and a sell-out is expected this time.