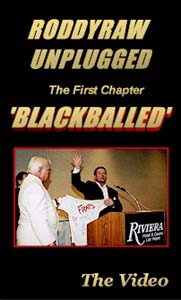 It is hard not to respect Roddy Piper as a professional wrestler. His acid-tongued promos and his dastardly ring stylings set the standard for the heels of today. It is hard not to respect Roddy Piper as an actor. He was pivotal to the success of John Carpenter’s They Live and even though he has starred in a host of B-Movie action flicks, his presence in them adds authenticity to even the most hair-brained of plots. As a person, it is hard for me not to respect Roddy Piper. Last year, prior to getting to the nitty-gritty of a telephone conversation, he first asked about the well-being of my son who was sick at the time before getting to the business at hand. That one gesture said a lot to me about the type of person Roderick Toombs is.

After watching his independently-produced ‘Blackballed’ video, I admire the man even more for the important message he is trying to get across. Blackballed isn’t your typical wrestling video. It isn’t a compilation of his best matches or interviews. It doesn’t detail Piper’s impressive career or his life, though there are smattering of remembrances included. Remarkably, it isn’t even about Piper himself at all. By viewing it you aren’t gonna learn about what it was for him to work with Ric Flair, how and where he grew up or what he likes to eat for lunch. What you will hear though are the truths about the dark side of professional wrestling. The things that nobody wants you to know and what modern stars try not to think about. How men who made millions for promoters and paved the way for today’s superstars — individuals like Lord Alfred Hayes and Johnny Valentine — are callously abandoned, dishonoured and betrayed by the very industry they helped build and by the very people they trusted as friends and colleagues. The truth more than hurts. It will make you sick inside.

The majority of Blackballed entails a fireside, Piper’s Pit-style chat with The Rowdy One and footage from this year’s Cauliflower Alley Club banquet and awards ceremony. At it, Piper received a plaque for his achievements in film. Hot Rod readily admits that when he was riding high in the eighties, he didn’t give the grand organization its just due. It was a mistake he regrets and is trying to rectify with his FRATS movement.

While accepting his award, Piper vowed to donate 5 per cent of his personal earnings to the Cauliflower Alley Club so that they can take care of those whom the wrestling world has conveniently forgotten about. He hopes that other influential grapplers and promoters do the same. His FRATS movement is about fans and wrestlers getting involved as well to spread the word and provide vital, life-saving support to those who desperately need it.

As Piper aptly points out, people like The Rock and “Stone Cold” Steve Austin have an obligation to give back to those who established the business of professional wrestling in the first place. Without them, neither The Rock, Austin or any of the modern day superstars would be as rich and famous as they are. Piper also brings up the subject of instituting a wrestlers’ union, which might not be a bad idea considering the current climate wrestlers are forced to work in, at least until another promotion is founded by someone, somewhere.

With the tragic circumstances surrounding the death of Johnny Valentine making shocking and shameful headlines this month, Piper’s noble call to action on Blackballed is a refreshing stance by someone of prominence in the business. Here’s hoping that unlike the pleas of wrestling’s neglected heroes of yesteryear, that the Piper’s call doesn’t go unanswered.