Usually when the World Wrestling Federation holds their British-only pay-per-view each year the event is an electrifying show. Wanting to make a good impression upon their fans there, the WWF and its talent put on their working boots and thinking caps on. Not last year. At the time the federation rolled into Sheffield, England, they had very few compelling feuds lined up. In the infamous Sanka feud, Kane was looking for Chris Jericho’s head because he had earlier spilt some coffee on him backstage. A master technician, Chris Benoit, was working a program with a brawler in The Undertaker. Chyna and Billy Gunn were seeking revenge on Eddie Guerrero and The Radicals. Perhaps the lamest of them all was Steve Austin’s search for the person who “ran him over” and put him out of wrestling for about a year. 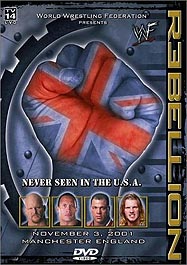 It’s sad to say but the best part of the show isn’t even a match. It is the events surrounding William Regal’s return to the United Kingdom. Regal’s promos are a riot. Backstage before his match with Crash Holly (of all people) a demure Regal puts down Britain’s sports heroes. Boxers especially take it on the chin. To Regal, Lennox Lewis “isn’t even English” and “Prince” Naseem is “worthless”. Regal says he is proud to represent his country then comments on his fellow Brits’ “bad dental hygiene” and that they are all “on the dole”. The reaction he gets in the ring later and his response to it are darn funny.Shackled with languishing angles it wasn’t the fault of the talent that Rebellion played out like an average episode of Raw Is War. I blame the infirm booking. The throw-away Fatal Four-Way championship match which capped the evening was a groaner and on the whole, not too many bouts before that were aces either. Strangely enough, Kane and Jericho’s encounter at Rebellion was the best they had in that series. The tag-team tables match is okay viewing (though we’ve seen it done better before) and Perry Saturn fans can rejoice as this pay-per-view allowed him to fully utilize his stunning arsenal of moves like he used to do in WCW and ECW. Why the gifted toughman is still floundering in mediocrity while employed by the WWF is a mystery to me.

Though it was carried by Sky Box Office in Britain, Rebellion wasn’t available to be seen here in North America until the release of this tape. Unlike other exemplary British pay-per-views, Rebellion was no great loss to us here. The promo on the box cover which reads…”Never seen before in the USA! The event that set the stage for Armageddon 2000!”…says it all.