Eric Bischoff is back in the wrestling business.

The former boss of WCW has joined Digital Artisans Guild Inc., the people behind the MatRats.com, a recently-launched “sports entertainment reality series” aimed at the under 21 year old crowd. The show is only available on the ‘Net now, but they are seeking a TV deal. 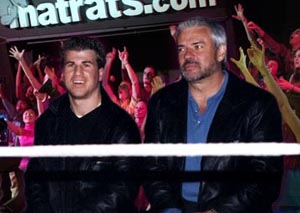 A few weeks ago, Bischoff attended a MatRats taping in Calgary with business associate and friend Jason Hervey of Mandalay Sports Entertainment. The press release quotes Bischoff as saying that MatRats was “the most exciting thing I have seen in sports entertainment in 10 years.”

Effective immediately, Bischoff has joined the D.A.G. Board of Directors and is the Executive Vice President of Development for DAG’S MatRats property. His contract is for two years, with an option. He will commute when necessary from his home in Phoenix, AZ.

The press release explains Bischoff’s role with the company: “Eric Bischoff’s responsibilities with DAG will include the facilitation of strategic introductions to the broadcast financial community, participation in the current and future investor relations for DAG, expert knowledge and mentoring of the wrestling business, the facilitation of strategic introductions in the sports entertainment field, continued input of the business plan and marketing strategies, working together with Mandalay Sports Entertainment (MSE) in the facilitation of the MatRats domestic and international distribution, appropriate pre-approved usage of his name and likeness for press related matters, worldwide business and media spokesperson for the project, and the provision of mutual creative control together with Graham Owen, DAG Executive Vice President and COO, on all aspects of the property.”

“To have someone like Eric Bischoff not only stand up and take notice, but to accept a key role in this property not only validates our belief in the success of MatRats, but propels us to the next level in a way that we had only imagined,” says Milton Kiehlbauch, President and CEO of DAG in the press release. “We are both humbled and ecstatic to have the opportunity to have Mr. Bischoff on our team, and together be able to change what may be the very fabric of sports entertainment.”

Eric Bischoff got into pro wrestling in sales and syndication with the AWA during the ’80s. He later became an announcer. He joined WCW in 1991 as an announcer. In 1993, he surprised many by leapfrogging to the position of Executive Producer with WCW. Promotions to Vice President in 1994, Executive Vice President in 1996 and President in 1998 followed. Bischoff deserves credit for bringing WCW into the mainstream with two prime time wrestling shows. The creation to the New World Order and heel turn of Hollywood Hogan propelled WCW to the top of the wrestling world for 96 consecutive weeks.

However, he also left behind numerous large contracts and catered to egos during his time in WCW. He tried to purchase WCW from AOL Time Warner with Fusient Media Ventures in January 2001 (in fact the deal was announced as being done: WCW sold to Fusient Media Ventures), but that deal fell through. Many though that Bischoff was done with wrestling altogether.