As the NHL gears up for the Stanley Cup, let’s take a minute and look at the career of the only pro wrestler that we know of with his name engraved on the storied Cup.

Jean Pusie won a Stanley Cup with the Montreal Canadiens in 1931, but was never more than a journeyman wrestler, a curtain-jerker in Montreal and Toronto. About his biggest accomplishment in the ring was getting a cauliflower ear. 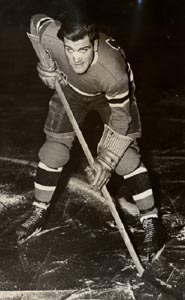 Jean Pusie as a Montreal Canadien

Still, there’s no doubting that he was a character who can proudly stand on his own in the same breath with Canadian eccentrics like Mad Dog Vachon and Dave ‘Wildman’ McKigney.

In his obituary in April 1956, the Canadian Press news service said as much. “The colourful young giant, who was six feet tall and weighed around 200 pounds, was generally conceded to make up in tempestuousness and eccentricities what he lacked in athletic finesse and ability.”

On the ice, Pusie had his success early in his career as a bit player on the second Habs Stanley Cup, playing in just six regular season games. From there, he bounced to a slew of teams in a series of now-defunct leagues: Philadelphia Arrows (CAHL), Regina Capitals/Vancouver (WCHL), Quebec Beavers (CAHL), London Tecumsehs (IHL), Boston Cubs (CAHL), Providence Reds (IAHL), Cleveland Barons (IAHL), St.Louis Flyers (AHA), Vancouver Lions (PCHL), Seattle Seahawks (PCHL) and the Fort-Worth Rangers. He played another 54 games in the NHL for the New York Rangers, Boston Bruins and a second-go-around with the Habs.

One newspaper report described him as a kind of wrestler-on-ice. “The idiosyncrasies of this good natured big boy from Quebec lure the throng. He goes on the ice with two or three days’ beard on his chin. He stops attacking players by leaping in the air, before he starts his rush at them.”

Pusie did have skills, when he wasn’t terrorizing opponents, starting brawls threatening the fans, or being arrested for disturbing the peace. One season in Vancouver in the Western Canada Hockey League, the defenceman led the entire league in scoring with 30 goals and 22 assists.

He became a bit of a cult star with the Rangers, and the Madison Square Gardens masses used to chant “We want Pusie-we want Pusie.” He’d hit the ice, cause chaos and end up back on the bench. There was even a poem written about him in NYC. Here’s part of it:

“When Pusie was an infant, hardly more dan t’ree days’ old.
All Canada was shiv’ring in de winter’s worsest cold.
But our hero kicked the covers from on top heem in hees cot,
And cried in lusty baritone: ‘Cheeze ‘ma, she’s too dam hot.'”

Off the ice, he was equally colourful. In 1946, he was charged in Montreal with being in possession of a revolver, threatening his girlfriend with it. In the arraignment, Judge C. E. Guerin admonished Pusie: “Chase after girls in the manner that pleases you, but do not carry a revolver when you do so.”

Besides a fling in pro wrestling, Pusie was also an occasional professional boxer, semi-pro baseball player and lacrosse player. He even announced plans to enter the Canadian National Exhibition’s marathon swim meet one year (though research has yet to determine if he followed through).

The final word we’ll leave to the late Jim Coleman, the legendary Canadian sportswriter who talks a little about Jean Pusie in his 1990 book Memoirs of a Sporting Life (Key Porter Books):

“My final meeting with Jean Pusie came after he had abandoned hockey and embraced professional wrestling. We met at Toronto’s Maple Leaf Gardens on a Thursday night when Pusie appeared in a preliminary bout on a regular weekly wrestling card promoted by Frank Tunney.

“Late that night, the wrestlers and several members of the news media were drinking in Tunney’s suite of offices on the main floor Church Street side of Maple Leaf Gardens. One of the wrestlers, Rudy Paytek, was an accomplished accordionist and was entertaining his fellow-wrestlers on the squeeze box as they waiting to be called into Tunney’s inner office to receive their individual shares of the night’s box-office receipts.

“Finally, from behind his office door, Tunney bawled out, ‘Pusie!’ As he arose from his chair, Pusie tapped the accordion-player, Rudy Paytek, on the shoulder. ‘Come with me,’ Pusie said to Paytek, ‘I like to listen to music while I’m getting screwed.'”