Lessons from the cheap seats at WrestleMania 17

HOUSTON — Things looked a little different to me at WrestleMania this year. No, I’m not talking about a victorious Steve Austin sharing a beer with former arch-enemy Vince McMahon. I mean my view of the WWF’s premier pay-per-view literally looked different, since it came from the upper deck of the Reliant Astrodome.

Normally, I would have taken in WrestleMania along with my roommates, family and perhaps a few friends in my home in central Pennsylvania. But the location of this year’s event offered me a unique opportunity, since one of my best friends from my college days at Duke University just happens to live in Houston. SLAM! Wrestling head honcho Greg Oliver was able to get me in to Axxess with a press pass, but for the show itself, I was forced to use the tickets my friends and I purchased last fall. So along with fellow SLAM! Wrestling contributor Aaron “Hank” Henry and my good buddy Vic Zhao, I set out on Sunday afternoon for Section 747. 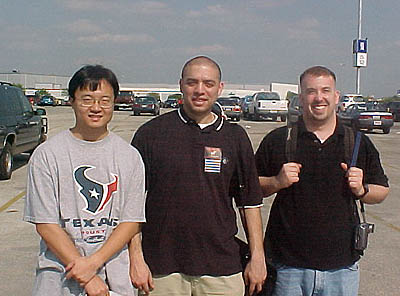 The seats in the seventh level of the Astrodome are known to Houston natives as the rainbows, probably because of the alternating rows of yellow, orange and red seats. As a point of reference, the rainbows are much, much higher than the lighting rig that hangs over the ring. Suffice it to say, this is binocular territory, though there is actually one more level of seats above us. The one positive about our seats is that despite being farther from the action than I thought humanly possible while remaining under the same roof, the sight lines are unobstructed and one of the giant video screens faces directly towards our section.

Fans up in the rainbows are there for one of several reasons. Perhaps they didn’t want to or couldn’t afford to shell out several hundred dollars apiece for floor seats. It’s possible that they waited until the last minute to buy tickets and the seventh level is the best they could get. Or perhaps, like us, they simply could not get through on the phone lines to order tickets for the first few hours WrestleMania tickets were on sale last fall. Whatever the reason, the fans up here are no less enthusiastic. One look around to see the dozens of signs – made more for the enjoyment of their fellow fans than a chance to get TV time, since there’s no chance the camera will ever find them this high up – makes that fact clear.

It’s also pretty clear that the Astrodome is out of practice holding events of this magnitude. The bathrooms are crowded, the souvenir stands are mobbed, and I wait in line for fifteen minutes at the “Nacho Express.” When I get to the counter, the three harried employees inform me that it will be at least another ten minutes for nachos, due to the fact that the nacho cheese sauce is cold.

Still, all of that is forgotten once the show begins. Jim Ross isn’t exaggerating when he says WrestleMania is sold out – our section is packed, and we find out later that we are part of an Astrodome attendance record. The residents of Section 747 pop and boo at the appropriate times, and chants that break out in lower levels or halfway around the arena are repeated here.

Two brothers, neither one of them older than 12, occupy the seats in front of me, and they strike up a running conversation with me covering everything from the pyrotechnics to The Rock’s version of Austin’s Stone Cold Stunner. They both give me a hard time for cheering on Triple H during his battle with The Undertaker. In fact, I’m able to find only a few allies in the adjacent rows to join me in bemoaning the loss suffered by The Game.

The crescendo of excitement reaches its peak for the main event. Austin, the Texas native, receives a thunderous pop. Despite his status as WWF Champion and self-proclaimed People’s Champ, The Rock receives a mixed reaction including a surprising number of boos. The brothers are split on this one, with the older one supporting Austin and the younger, sporting one of The Rock’s shirts, sticking with the champ. When the match gets under way, the boys hang on every move, as do all of the fans in the rainbows.

Somewhere amidst all the chaos, I have a revelation, an epiphany of sorts. In this day and age of monthly pay-per-views and TV saturation, it would be easy for WrestleMania to be just another wrestling show. The feuds for this year’s version are nothing special, most of them having come together in the span of just a few weeks. Certainly it isn’t the match quality that sets WrestleMania apart, though X-Seven had more than its share of highlights.

Yet there is still something that makes this event special. It should have dawned on me when I saw the cars in the parking lot hailing from all over North America, many with windows covered in slogans like “WrestleMania or bust.” I probably should have pieced it together while snapping pictures at Axxess alongside people perfectly content to wait in line for hours for a single autograph. But it isn’t until now, watching the two young men in the ninth row of Section 747, that it comes to me. It’s the fans, especially the ones who made the journey to Houston and paid good money to get a much worse view than they could have had watching TV in their own homes, that make WrestleMania live up to the hype.

The show ends with most of the folks in the rainbows happy despite Austin’s seeming heel turn. Aaron, Hank and I stick around to watch the excellent video package of the night’s events, but the two brothers leave with the rest of their family. I never do catch their names.

I plan to attend WrestleMania again next year. I’m hoping to get better seats next time, but if I end up in the equivalent of the rainbows in whatever venue hosts the next show, you won’t hear me complain.