Autobiography in works from Lance Storm 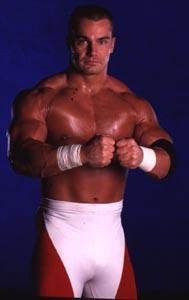 Over the last few years, Lance Storm has gained the reputation of being one of the most eloquent and articulate wrestlers in the business.

It’s a reputation earned not only from delivering T.V. interviews in an understated, yet confident tone of voice, but also from the well-written and verbose commentaries he’s penned for his official website. So, it should come as no surprise that the soft-spoken Calgary-native is currently writing his autobiography.

Storm starting working on the book after Jeff Marek of Live Audio Wrestling contacted him about the possibility of writing his life story.

“Jeff approached me and said, ‘would you seriously think about it?’ He said he’s got a publisher interested in doing it. And I said, ‘Oh, wow, okay.’ (laughs) So I started thinking about it and figured it would be an interesting challenge,” Storm told SLAM! Wrestling recently from his home in Calgary. “I’ve got 10 years of wrestling to write about, so there’s certainly a lot of information there. He impressed on me again that if I was interested I should do it. I started to think that I should start writing because regardless of whether I do it now or in another 10 years there’s a lot of stuff to try and remember and get down, so I started writing.”

Writing his autobiography is proving to be a big challenge for Storm.

“It’s a pretty daunting task when you start looking at your entire life and trying to piece it all together. The toughest part is taking all the different parts of your life and wielding them into one continuous story. You’ve got growing up, you’ve got becoming a wrestling fan, you’ve got being in school, what lead you to getting into wrestling… so trying to weld them all together and deciding what’s actually pertinent and what I really don’t give a damn about is tough. It’s hard to get it all together and you tend to write a whole bunch of this, a whole bunch of that and sort of try to figure out where you piece them together. It makes for a very handy cut and paste feature in Microsoft Word.” (laughs).

Another big challenge is actually finding the time to write.

“It’s going to be a big job and finding the time is really hard. It’s bits and pieces. Sundays, a lot of time, I’ll fly out in the morning and I’ll get in the afternoon and I don’t actually work that night, so I try to hit a few hours then. I’ll catch an hour on a plane or sitting in front of the TV at night when I’m home trying to get a couple of hours every week, but that’s all the time I’m managing to find right now. I’m hoping we get a shutdown for two or three weeks and I can pick a night or two a week that I could sit down and spend a few hours, but with trying to spend time with my kids and my wife it’s turning into a big time consumer.”

“I would say I’ve probably written in the neighbourhood of what I would call four or five chapters,” continued Storm. “I’ve got growing up, becoming a wrestling fan… then I’ve got what made me make the decision of getting out of university and pursuing wrestling. I’ve got going through the Hart camp and so forth. Those first three (chapters) are pretty solid. They need a little bit of fine-tuning. Then I did my first year in wrestling, which still needs a ton of work. Most of the major memories are down to first Japan trip with F.M.W.”

Marek has read what Storm has written so far and is impressed with the quality of the writing. Still, he feels there is room for Storm to improve.

“Lance writes the way he speaks and right now it’s both a strength and a weakness,” said Marek. “Lance is very meticulous about names and dates and times. I think a lot of it is sort of lost in the story he’s trying to tell because he really goes out of his way to make sure that everything is accurate. What Lance is going to have to work on, and he’ll admit it himself, is focus more on the story and not worrying so much about details while at the same time not sacrificing anything in terms of accuracy. It’s a real tightrope.”

Storm insists that his autobiography will be different from recent wrestling biographies that he says are self-serving in nature and tone.

“I’m hoping to make this as honest as possible. I’ve seen a few of the books out there that are fairly ‘toot your own horn, self-promotional’ and I really don’t want to do that. I want to show what I went through and what I had to do. There’s a lot of entertaining and interesting stuff there on its own, I don’t think I have to try to weld it to any specific formula… I think more of the appeal, more than anything else, to me is actually having a book on the shelf that I wrote myself, not just a book that’s about me that somebody else wrote.”

“I don’t want to give this book a theme (like others) because it tends to distort the facts a little bit trying to follow the theme,” continued Storm. “I want to get all my memories down and see what theme there is to my life. I’m taking it from the point of view, since I’m not done my career by any stretch, sort of the ten years my road to success type of thing… my journey to get here.”

Storm says one of the best things about writing the book is all the old memories it’s triggered.

“In writing the book I think of something and I say to myself ‘Oh jeez, I gotta call (Chris) Jericho’ or even some buddies from high school I may have lost touch with and I say ‘Man, I should try and track him down.’ It’s amazing how much you actually can remember when you sit down and start going through bit by bit.”

Some might think it’s a little presumptuous for Storm, who’s only been wrestling for 10 years, to write an autobiography.

Storm disagrees pointing out that others have written books with far less wrestling “mileage.”

“Goldberg only wrestled two (when he wrote his book). The Rock was wrestling another two. Chyna has been wrestling a couple and (Kurt) Angle’s wrestled one so I think I have a lot of years on all of them. I think I’ve got more than enough material there. I’ll probably have to leave stuff out.”

“The more we talked about he realized people are writing books that have only been in the business for two years,” said Marek. “The time is right for wrestling books and we found two different publishers that were interested.”

Storm says he’s taken a unique path to the spot where he is now and he feels that will make for an interesting autobiography.

“I think I’m one of the last people that went through wrestling’s territories. You know, did the 80 hours up north in the freezing cold for 20 bucks a night. Cactus Jack certainly paid his dues but a lot of the people up top right now (didn’t have to)… ‘Oh, I got a developmental deal when I was 25, I was on Raw when I was 26 and I was world champ when I was 28.’ Well where’s the compelling story in that? So I think there’s certainly a very interesting, long road I took that not that many people take anymore. Certainly old timers that have been in this business a long time have those kind of stories, but I don’t think they are of the generation that are writing books.”

With a dearth of wrestling biographies already out there and a slew of others to be released by year’s end, one would think the market would be over saturated with wrestling books.

“It’s sort of the same way as I view wrestling matches. Everybody throws a dropkick but not everybody throw a good one,” laughed Storm. “If nothing else, I think mine will be the most honest and straight-forward, least self-promoting thing ever written because that’s not the way I am and anyone that’s visited my website knows that. I’m certainly not going to have the mass appeal of a Kurt Angle and so forth because he’s certainly more prevalent and seen in more homes than I am, but who knows. It’s going to be probably a year or more before this thing is out, who knows where I’ll be. I’m not as worried about criticism because I think it will be a good, honest story and those who like it, great and those who don’t, well too bad.”

Storm says the response from friends and peers in the business have been overwhelming. Jericho and Don ‘Cyrus’ Callis, two of Storm’s closest friends, have offered their support and help.

“Jericho has been great, saying if you need any help with it let me know. Don Callis said he would love to write the forward if I want him to. Everybody’s been very positive. I think a lot of it is because they’ve read the stories I’ve written on my web site and they know that I’m well spoken and intelligent enough to write a true story while avoiding things that might offend people and get them in trouble. Stuff like ‘he slept with this person, he did that’… that’s not the intention of the book. What other people do other than what involves me isn’t any of my business so I think everyone’s enjoyed the way I’ve written the story that I’ve done so far and know that the book is not going to be of that format.”

“It’ll probably be the first time anybody’s written honestly about ECW which will certainly make it unique,” offered Marek. “It’s going to be a wrestling autobiography about his life and how he got involved in pro wrestling and why he is ‘freakish’ for this industry. He doesn’t do steroids, he doesn’t party, he’s not ‘one of the boys’… he’s an outsider by being a geek. (laughs) ”

As far as a working title of the book… yup, you guessed it: If I Could Be Serious for a Minute.

“Not just because it’s my line,” explained Storm “but if you actually look at my entire life, even as a kid, I was very serious, straightforward, held-back personality, it’s actually more appropriate than people think. It does date back a while and it’s really been enlightening to me.”

“I talked to my mom about it and I mentioned it’s sort of like being in therapy. If you go to a shrink, he basically sits there and tells you spew out your life and you analyze yourself basically, which is what it is I’m doing when you start looking at it. I started realizing why I am this serious, quiet person. I have two personalities. I’m relatively shy and withdrawn a fair bit which comes from my childhood which I explain in the book.”

“I always come across as the really serious, stern, not all that much fun guy at first,” admitted Storm. “Then when I eventually start getting closer to people I start to change and become more lightened up and a lot more friendly and fun to be around. It’s a barrier that I cross every territory I go. It’s a transition period I go through every time I meet new people. It’s interesting and the fact I been like that my whole life and sort of now realize why it is a rather appropriate title.”