One of the things that wrestling fans don’t get credited for is the number of deep philosophical questions they must deal with every day. Questions like:

-If a pinfall occurs, and there’s no ref to see it, did it really happen?

-What exactly IS the Rock Cooking? 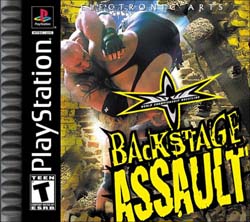 Wrestling video games are like buses on a rainy day: nothing for months and then three at once. In this latest salvo, Electronic Arts has released WCW Backstage Assault for the Sony Playstation. Judging from the quality of their first effort, WCW Mayhem, I was anxious to see how they could improve upon their success.

From the opening, things are going to get people angry — there’s no ring. No crowd. it’s all back rooms and illegal moves. The idea of moving out of the ring was first introduced by EA in Mayhem, but the point was you could be in the ring if you wanted to. Nothing but hardcore matches can get boring too. That’s a decision for you to make.

Let’s talk about the plusses first. THQ decided to eliminate commentary by the ring announcers, but EA has kicked theirs up a notch. Tony and the Brain are as talkative as ever, with the same intelligence in calling moves and noticing repeat moves as we saw in Mayhem. To be honest, it sounds like many of the same sound bites are used again here, but that may be just because there’s only so many things you can say in a match. Also, the opening videos for each character are very nice. More theme songs this time, too.

For just about everything else, it’s a mixed bag or improvements and failures. There’s a larger selection of moves now, and the game controls are a little simpler than they were before. Weapons abound, and picking or using certain ones unlocks them in create-a-wrestler. Because the play area has gotten so much larger, when the characters get too far apart, the game zooms out to an overhead shot of the whole room, with you and your opponent appearing as little icons on a map.

The character design, however, has gotten VERY odd. The skins wrapped over the body models have gotten more detailed, but the body models themselves have gotten less so — all spindly arms and legs with barrel chests, making everyone look like evil alien copies of the wrestlers. There’s a LOT of jittering and twitching too. At times it looks like the wrestlers are competing on an old electric football game. Quite a lot of missing and passing through props and the other wrestler, too. And let’s just say that the way one wrestler is jittering and swaying as he pins the other…it looks a little embarrassing. (I mean, I KNOW it’s supposed to be breathing but…well, I’ll stop there.)

The playability itself is not bad. If you can get past the jerkiness of the graphics, the game underneath is strong. Since the ring is gone, the game takes a more adventure game/street fighter-like aspect — your goal isn’t as much just to defeat the next wrestler, but to defeat him in the right way to open up more playable characters, play areas, and moves and weapons to be used in the extensive create-a-wrestler area. But I think a little TOO much is locked: there’s over 60 wrestlers in the game, but only 25 are available as the game starts. And some of those are people like Doug Dillenger and Sarge, people that wouldn’t exactly be my first choice to play. It becomes almost a requirement to go through the career mode to made the game halfway-playable.

The game’s load times are ridiculously long on the PSX, I can only hope they’ll be less so on the upcoming PS2 game. (The N64 version of the game hasn’t shipped yet)

At the core of this game, there’s an overwhelming sense of “something’s missing”. More than just the lack of ring, the whole game feels unfinished, like it needed one more round of improvements to make the game really ready. It’s playable, but they’ve missed a step here. I hope to see more next time.