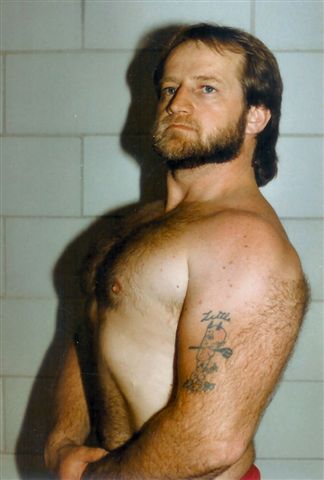 Canadian pro wrestler Rick Bolton, who died last week of a heart attack at 49, is best known for being a victim of George ‘The Animal’ Steele.

Hit by a car when he was 15, Bolton had a unique ability to twist his arm all the way around. The first time that Steele met Bolton in a Detroit locker room, he knew that it had potential.

“I said, ‘Gee, how would you like to take a trip to New York with me?’, just kidding him. Then later on, I had him fly in to Philadelphia and we did have a match,” recalled George ‘The Animal’ Steele to SLAM! Wrestling.

The match took place in Hamburg, PA, and Steele thinks it was in 1976. “He had some sort of a freaky shoulder or elbow. I’m not exactly sure how that came about, how he got it. But when I lifted him up for the flying-hammerlock, his shoulder appeared to be out of joint and his elbow was cockeyed. It was horrible, horrible looking thing.”

“After I dropped him, I threw him out of the ring and started kicking him. Fans called two ambulances. The acting commissioner at the show came out and started chewing me out.”

Later, Steele even got a letter from the governor of Pennsylvania saying that it was too risque.

But Rick Bolton was about much more than just one incident.

He lived in Chatham, Ontario his entire life, and according to his common-law spouse Nancy Tibensky, everyone knew his name.

“Everybody knew Rick around town,” Tibensky said. “Rick was a hard person to describe. I’d never met anybody like him before. He was a very kind man, a very generous man and he would help people. If someone had a problem, he was always there for them.”

Bolton took to wrestling in the mid-’70s, and never really became a big star. Besides wrestling around Chatham, he would wrestle in and around Detroit, and made one trip to Puerto Rico. In George Cannon’s Superstars of Wrestling promotion out of Windsor, Bolton was the lightheavyweight champion for a time. His career wound down by the mid-’80s, and he attempted to comeback on a few shows in the ’90s in his hometown of Chatham.

Long-time wrestling fan Terry Dart, of London, saw Bolton wrestle on many occasions. “He was completely scientific, never to me aggressive,” recalled Dart. “He took a lot of bumps, except if they were in their hometown.”

Bolton did not have any children, but his wrestling legacy lives on through D’Arcy Lunn, better known as Ontario wrestler Dangerous Danny Steele. Lunn was Bolton’s only wrestling student.

Lunn had a tough time initially convincing Bolton that he was worth training, but he succeeded — and refused to take any payment for the lessons at the Kayo Boxing gym. According to Lunn, Bolton just told him to train someone one day himself, and that would be payment enough.

“Rick was very protective of the business,” continued Lunn. “He was the last bastion of kayfabe around here … that was the era he came from.”

Bolton died from a clogged artery and a blood clot.

“They said he never had any pain, his heart just stopped,” explained Tibensky. “It was very sudden.”

Throughout his wrestling career, Bolton keep a job in Chatham. He later worked part-time for the municipality of Chatham-Kent, and was a personal trainer in a local gym.