For those not in the know, Brian Wall has been in the wrestling business for the better part of a decade. The funny thing is, he’s been in both of the major wrestling federations in the past, but it’s his current stint in ECW as Julio Dinero that is getting him more recognition.

As part of the heel team of Hot Commodity, Wall is making a name for himself in hardcore-land by filling a void in ECW — having a good heel combination that can be bad-ass as well as humorous.

It’s easier for Wall to laugh now, considering that he’s now a bigger fish in a smaller pond, the reverse of his tenures in the WWF and WCW. 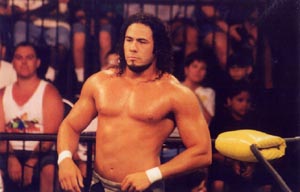 “I wrestled as Julio Sanchez in WCW,” Wall told Slam Wrestling. “My character was no one that got any TV time, or anything to create a character. I’d go in there and wrestle their guys, and we’d have competitive TV matches, but was never given an interview, or any chance to solidify a persona. I just when in there and wrestled pretty much.”

He continues on about his stint in the WWF, which wasn’t much different. “I worked as Julio Fantastico in the WWF. I worked with Steve Blackman on Heat once, and I did a lot of stuff with guys like D’Lo [Brown]. I wrestled on a lot of those Saturday night tapings, and they used me in a lot of dark matches, which was fine with me. I’d just go in there before the shows were taped and put on a couple of matches. It was a good experience and I learned a lot.”

Sounding gracious for the opportunities allotted to him, Wall still knew he could accomplish more. And in ECW it appears he’s doing so. While Hot Commodity isn’t at the top of the rankings right now, it could be successfully debated that his role in ECW currently is affording him much more of a spotlight than before he joined fed. Wall tells the tale of how he became an ECW-ite.

“I put a lot of time into … I spent two-years in WCW and was never given a contract, so I was like, ‘OK, well I’ll go to the WWF.’ I know people in all places, so I went over there. I was never given a contract, but I was given the hope of getting a deal, and I was sent to their training facility and worked with Dory Funk Jr. and Tom Pritchard. I realized that if I was going to get a job it wasn’t going to be any time soon. I decided to take a shot at ECW. It was in my hometown (a house show), Washington, DC, so I went and got on the show accidentally some how. They said, ‘Do you want to work?’ and I was like, ‘Sure,’ so I wrestled, and they brought me back the next day, and I came back two months later when my schedule allowed it. I worked for them again, and Paul E. was there and he invited me to join, so I waited until all my indy dates were done and joined up in June of this year, full-time.”

Wall’s path to ECW started several years ago, when he entered the Baltimore Monster Factory, and trained with Axl Rotten and Hack Myers. He’s been a regular on the indy scene around Maryland, and appeared on last year’s Heroes of Wrestling pay-per-view.

After talking to Wall, his beginnings in the business are as humble as the man is himself. Not taking himself to seriously, he remembers his first match, but not in great detail.

“A battle royal was my first ever gig. I was the first one tossed out (laughs). I didn’t last too long. I went right up to the biggest guy in there, like an idiot, and was thrown out pretty fast. They didn’t have numbers for everybody, and I knew I wasn’t going to win, so at that point I just went after the big guy. Battle royals, in my opinion, if you’re not going to go over, get out of there as soon as you can. Punching and kicking going on all over the place is not the place to be. I started in 1994. I don’t have the date. I’m probably the only wrestler who doesn’t know the date of his first appearance. You ask anybody and they usually go, ‘Oh, it was December 3rd, 1941,’ or whatever. I should be a bigger fan of myself (laughs). To me is was just another day, even though it was the first day of my wrestling career, to an extent, I was just to busy with everything else, I guess.”

Over the years Wall has developed his own style. To borrow from Canadian bureaucratic rhetoric, his style is a cultural mosaic of several different aspects in the realm of professional wrestling.

“I would consider myself a mix of European, Japanese and straight forward good old American professional wrestling. I try to do some of the high flying stuff, but it being ECW, I’m not going to out fly Rob Van Dam or Kid Kash, so I don’t try to go overboard with that. I have a lot of martial arts stuff, but I’m not going out kick Van Dam or Tajiri either, so I kind of find stuff for me to do that they don’t. As far as the European stuff, I can do a lot of chain wrestling or mat wrestling, but usually that isn’t called for, so I usually go to the good old America WWF main event punch-and-kick style, which is kind of what seems people like to see.”

Wall’s character is the opposite of his down-to-earth, real-life persona. In real life, he works in accounting. Julio Dinero is a male gigolo, and the Hot Commodity team of EZ Money and Chris Hammerick is deceiving, as they’re all kind of pretty boy heels. Yet, that’s the path he appears to be taking to make a name for himself in ECW. And his new found recognition is just the tip of the iceberg, as Wall’s list of goals is not short.

“Right now I would like to be ECW heavyweight champion. Not right this second, obviously, that would be impossible and unfeasible, but I would much rather, at this point in my career, stay here. Obviously there’s a progression that occurs with most guys, like the Dudleys and Taz, where they move on to the next level, but I would rather stay with ECW and try to get to the next level so there’s no reason to leave.”

It seems like Wall his sights set high, as they should be. But just because he hasn’t reached the pinnacle yet doesn’t mean he hasn’t had a lot of highlights in his career thus far. Wall ends the interview with the story of his first match in the legendary Madison Square Garden in New York City. He called it one of his “favourite matches.”