Rowdy Roddy Piper’s days of wrestling are pretty well done after 31 years. An artificial titanium hip, lack of a rotator cuff, and other small physical problems have slowed the former ‘Hot Rod’. 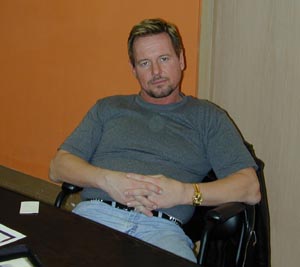 But it hasn’t slowed his mouth down any, and now Piper has turned his oratory skills to preaching about politics, and wants to do what he can to get his fellow Canadians out and vote.

Born in Saskatoon, Saskatchewan, 46 years ago, Piper is quick to admit that he has no answers to the ills of the country, like the weak Canadian dollar, high gas prices and immigration. But he feels a need to do something.

“What can I contribute to my country? What can I do for this nation? What can I tell them? Get out and vote!” he told SLAM! Wrestling in an exclusive two-hour sit-down interview in Toronto.

Dressed casually in jeans, t-shirt and a black leather jacket with black gloves, Piper dismissed a recent Internet campaign to tout The Rowdy One for the top job in Canada. “Forget Piper for Prime Minister. If you want to say that, fine, but I ain’t gonna be it. I’m not going to insult your intelligence. But I do have the power to make people move.”

During the interview, Piper’s Canadian political knowledge proved to be sketchy, at best. He couldn’t name the big five federal parties running in next week’s election or what the campaign issues are. But what he may lack in understanding of the political scene, he makes up for with enthusiasm. And as his campaign continues over the coming week, his comprehension will undoubtedly improve.

These days, Piper lives in an Oregon mountain retreat with his wife of 22 years, Kitty, and their six children. It’s the only permanent home that he has ever known, having been on the road for wrestling for seemingly forever. He has been trying to convince his family to move to Vancouver, where the movie and television work is plentiful.

As a child, Piper – then known as Roderick Toombs – lived in many places across Canada. “I lived in a different town every year of my life until I was 13,” he said. “We moved all the time. I was always the new kid on the block. I was always getting beaten up.”

His father worked for the Canadian National Railroad as a police officer, and as a result, the family moved often. Among some of the locations he lived until getting into wrestling at 15 were Dauphin and The Pas, Manitoba, Dawson Creek, B.C., Port Arthur (now Thunder Bay), Winnipeg, Toronto, and Montreal , plus stints abroad in Glasgow, Scotland and Melbourne, Australia.

He said that his upbringing was Conservative, and that he met Prime Minister John Diefenbaker when he was about five years old.

After leaving home at 13, Piper drifted, getting into trouble and not settling down until his first professional wrestling bout in Winnipeg against Larry ‘The Axe’ Hennig. Piper recalled that the match was pretty short, and that he was soundly defeated by The Axe, who outweighed him by 150 pounds. The Piper surname came about because the ring announcer couldn’t remember his actual last name, and Roddy was playing the bagpipes on his way to the ring, a skill he had been practicing since age five.

His wrestling career was slow to take off, but by the early ’80s, he was one of the biggest names in the sport. When the WWF held the first WrestleMania in Madison Square Gardens in 1985, he was an international superstar, the Lex Luthor to Hulk Hogan’s Superman; the villain that kicked singer Cyndi Lauper and mocked actor Mr. T.

Besides his political preaching, Piper is in Toronto this week on business, including work on his autobiography called If You’re Going To Die Kid, Die In The Ring, It’s Good For Business.

So while Piper may not have much experience with national politics, he learned the tough way of the backstage politics that plague pro wrestling. He was blackballed twice by promoters who tried to keep him down, and now that he is not contractually bound any longer to World Championship Wrestling, he plans to organize a union for wrestlers. “I’m going to start a union now because they can’t hurt me.”

If nothing else, Piper hopes that his media run across the country over the next little while will boost the patriotic spirit in Canadians. For him, it seems to be liberating to talk about his life in Canada, and what it means to him after years and years as being billed by promoters as coming from Scotland. “I want to jump up and put the Canadian flag all over me and say, ‘Get up, get up! Be proud, make a noise, be heard.'”

As someone who has travelled the world, Piper knows where things stand. “Canadians are very well-liked people around the world, yet you come back here [to Canada] and the pride, it’s almost like they don’t allow it.”