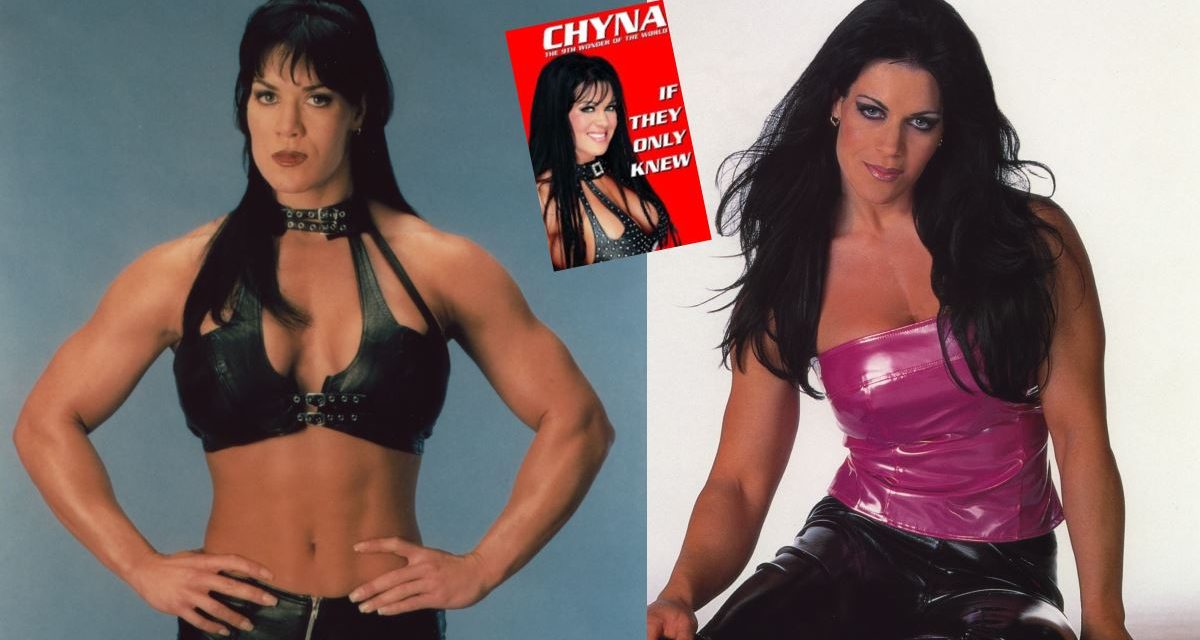 Many wrestling fans are familiar with Chyna, a World Wrestling Federation superstar, through her hard work in the ring and recent appearance in Playboy, but they rarely have been given a glimpse into who she really is.

This is something which may soon change.

Making a promotional appearance for her Chyna Fitness video at a Toronto-area movie theatre-bookstore complex, she spoke to a group over 200 fans and answered questions before signing copies of the video and Playboy. She seemed to appreciate the interaction with fans and noted their interest in her work.

“It’s great for me to see that because it always shows the dedication of the fans” she told SLAM! Wrestling. “I feel like this is a wonderful point in my career. I’m tickled pink that there’s been so much interest in what I’m doing. I feel like I’ve delivered this great message to people and it’s very rewarding. I enjoy the work, but when it actually happens people appreciate what you’re doing and listen to what you’re saying.” 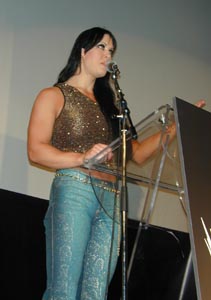 Chyna answers questions at the Paramount Theatre in Toronto. — Photo by Greg Oliver

Chyna Fitness was a project close to her heart. She was part of the team which designed the 40-minute workout, which incorporates a variety of exercise techniques.

“Before I was ever a World Wrestling Federation superstar, that’s what I did,” she said. “I worked out, and that’s become part of my lifestyle and my job. Although I am the only woman who wrestles with the men, I have been able to hold my own and what we do is entertainment. However, I still get hit just as hard as the guys and I have to be able to pick them up and throw them around and maintain the body of an elite female athlete. I think there are more and more women out there working out now and we live in a fit society and women aren’t trying to look like Barbie anymore. They’re trying to look like Chyna, and I think that’s great.”

The wrestling superstar was born Joanie Laurer 27 years ago in Rochester, New York. She began to work out at age 15 to her mother’s copy of Jane Fonda’s Workout and later trained at Wladek ‘Killer’ Kowalski’s Massachusetts-based wrestling school. In 1997, she made her debut with the WWF and became one of it’s most popular attractions.

What made Chyna different from most women wrestling before her was her physical size and in-ring ability. She has also gathered a great deal of public recognition

Chyna is a three-time Intercontinental champion and regularly competes against male wrestlers often outweighing her by 100 pounds or more. She doesn’t believe she is held back by her gender and doesn’t believe other women should let it happen to them.

“I think I was given a genetic gift to be 5’10” and to have a big frame,” she explained. “I took that to a different level and developed the body of an elite female athlete. I put that at the forefront so people can really relate to that because maybe there are other women out there want to look like I do, but they’re ridiculed or they’re told that it’s not okay or what society deems is beautiful or you should starve yourself and look like a beanpole with fake breasts because that’s the only thing that’s going to get you looked at. It’s not true.”

Despite being considered by many in the audience to be a role model, Chyna appeared reluctant to consider herself in the role.

“I guess I really don’t consider myself to be a role model,” she said. “That was never my intention. I’ve done this for me, and everything I’ve done has been for myself. I think by standing up for myself, it reaches so many other people which then becomes inspirational to them. I don’t want people to be just like me, but I hope it does send a message to a lot of women out there. Be your own woman and don’t listen to how somebody else tells you how to be or how society tells you how to be. There’s so much potential locked up in our women and I think it’s not used because it’s crushed down. I think that people consider me a role model, but I don’t claim to be.”

Chyna has recently finished the final draft of her autobiography, which will be released in January. She felt it was one of her greatest accomplishments to date.

“I think this is probably one of the most rewarding, fascinating things that I’ve done so far,” she said. “Most celebrities when they describe their memoirs, and this is not a sports memoir, really don’t take off the mask and really only tell the people what they want them to know and see. I think I took that mask off and told people a detailed description of my life. It was important to me being a person that goes out and displays these messages. I think it was important for me to be candid and honest about who I am and what happened to me and why I chose this path.”

Chyna believes the book will also make people laugh and see another side of her.

“It’s written in an extremely funny way,” she said. “That’s a lot of Joanie, that’s my personality which is great. Chyna’s kind of stiff, Joanie is really funny. The book is funny, and you’re going to chuckle all the way through. It’s a very powerful book.”

For several years, many wrestling fans have debated the nature of Chyna’s relationship with fellow wrestler Hunter Hearst Helmsley, otherwise known as Triple H. She prefers not to discuss the matter, and lets people draw their own conclusions.

“I think it’s funny that people bring that up,” she said. “I, most of the time, try to keep that personal. Most people, because of what they watch on TV, have already determined that we’ve broken up or got back together or that we’re married or engaged. None of that has ever been discussed, so I don’t discuss it. I guess people have their own perceptions of what’s going on.”

Chyna is on the cover of the November 2000 issue of Playboy and felt she was making a positive statement by appearing in the notorious men’s magazine.

“I think it gave Playboy and myself a unique opportunity to do something special,” she said. “Not only is having Chyna on the cover of Playboy something special, but it’s also a very powerful statement. I think it’s something that people aren’t used to seeing. The curiosity level was there, the fan base was there, the years of dedication and hard work on my body were there, and that’s a very powerful combination. I think that’s an irreplaceable combination that made this issue very attractive to most people.”

The pictorial was shot by Arny Fretag, a longtime Playboy photographer. Chyna noted she felt incredibly comfortable with the shoot and with her body as well.

“It felt wonderful,” she said. “I was not apprehensive about taking off my clothing. I’m very proud of that, and I think it’s about darned time that we show something like that. I didn’t do this as a sexual thing, I did it because I think my body is beautiful and it’s a piece of art. That’s how I think it was shown, in the most incredible strength and sexuality.”

Despite her appearance in Playboy, Chyna noted she has not received any negative reaction from fans or members of the public in regard to the photographs.

“I really wondered at first whether people would say ‘she sold out’. That’s not what it is. I’m a woman and I have strength and sexuality and showed a very feminine side of myself. I haven’t gotten one negative comment about it. Let’s just say I’m pleasantly surprised,” she said.

Despite being in top physical condition, Chyna does not appreciate being perceived as a bodybuilder.

“Most of the time, I think bodybuilders are unhealthy people,” she said. “There’s a lot of drug use and different weights during the year. I’m lumped in with them all the time, and that’s not the case. I think I’m fit and healthy and sculpted my body the way I want to look.”