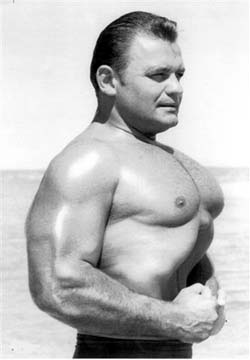 Picture a man strong enough to lift two women at once and rip phone books in half, and you’re part-way to imagining what ‘Iron’ Mike Koncur looked like in his prime.

Koncur was one of the first bodybuilders to get into pro wrestling, and became a regular on the Manitoba mat scene in the ’50s and ’60s. Today, he regrets a little the missed opportunities to travel, to see the world through pro wrestling.

“It might have been nice travelling all over, getting fame and everything, exposure on TV,” Koncur told Slam Wrestling. “But my marriage came along, I started having children and had devote my time to my children, taking them to games, hockey games, coaching little league.”

His day-time job kept him in Winnipeg too. Koncur was a machinist with the CNR (Canadian National Railway) for 45 years. When he retired in 1994, he had the distinction of being number one on the CNR machinist’s seniority list.

Growing up in the ‘Peg, Koncur was big into sports, succeeding particularly in soccer. He also was an amateur wrestler and bodybuilder, and went to the pro matches. “When I was a kid, you used to get a ticket for $1.75,” he recalled with a laugh.

“George Gordienko was actually my idol. When I was about 13, he was 18 and I was really impressed.” Following his idol into pro wrestling seemed like a logical step.

Gordienko and Ole Olsen trained him, and he made his wrestling debut at the Brooklands Wrestling Club in 1956 against Bulldog Bob Brown. It was the first of seven matches that he had with Brown over the years, winning six and a seventh when the Bulldog was disqualified.

Brown was a real character, Koncur said, and like him, had his heart set on being a wrestler. “He was really enthused about wrestling. He’d do anything to get into the wrestling game,” Koncur said of Brown. “He’d pile chairs, he’d put up the ring, little by little he got into it. He did everything for everybody. He was just a born wrestler. He loved it. He’d wrestle for anything, even for free.”

Koncur considers his greatest match to be against Buddy Sprott, a former “Mr. Manitoba” bodybuilder whom he defeated in 1957. At the time Sprott was known as the ” Fighting Fireman ” being an employee with the Winnipeg Fire Department. Sprott went on in the pro ranks wrestling under the name of Rick Hunter and established himself on the international circuit over the years on a full time basis.

Along with Wally Hewak, Mike Koncur was instrumental in the opening and operation of the Atlas Wrestling Club that existed in the late 1950’s and early 1960’s. Together, they held the Atlas Tag Team Championship in 1958.

Pro wrestling has been big in Winnipeg since the ’50s. “It was the only game in town,” Koncur explained. This was a time before the big-league hockey Jets arrived, and the city just had a junior hockey team during the winter, and the CFL’s Blue Bombers during the summer and fall.

“We have our cold winters here, and the Winnipeg Auditorium was a beautiful spot for wrestling,” Koncur said. 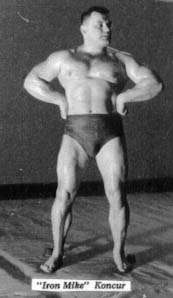 ‘Ironman’ Koncur also performed strongman feats occasionally at YMCA annual shows and at the Red River Exhibition. He was invited on two occasions to put on a demonstration for inmates at the Headingly Correctional Institute at Headingly, Manitoba.

A unique lifting feat of his that was interesting for spectators to observe, was two girls sitting in specially constructed cradles attached to either end of a lifting bar that was mounted at shoulder height on a stand. From that position Koncur performed a overhead lift in very strict form to minimize any chance of a mishap occurring. The combined weight of the girls and apparatus was estimated to be in the 270 to 280 pound range.

Another show of strength that he executed was tearing a telephone book in half with his hands. Spectators from the audience were invited to attempt to duplicate this feat and many tried, but none ever succeeded.

Thanks to Walter N. Williams for his help with this bio.