Extreme Championship Wrestling makes its Canadian debut on September 9, 2000, and Steve Corino is very excited about coming back home. Yes, the “Old School Hero” is a Canuck, having been born in Winnipeg, Manitoba, before moving to Philadelphia five years later. Since then, he’s rarely been back to Canada, having wrestled a few independent shows in Quebec in 1996 – this marks his first ever visit to the Toronto area.

SLAM! Wrestling got a chance to sit down with Corino for an exclusive interview after a house show in Buffalo on the 8th, the eve of the promotion’s Northern journey. 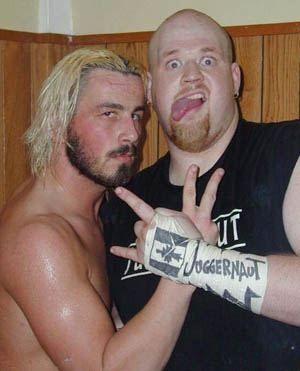 Corino, who is in the middle of a big push, didn’t reveal who he will be taking on in Mississauga, but he’s “… looking to get involved in the Justin Credible / Jerry Lynn feud (for the World title).” He’s already challenged Credible for the title in a match which will air on TNN next weekend, and he’s planning on being in the title hunt at the November to Remember Pay-Per-View.

Corino’s road to the main events has been a great ride. “I’ve been involved in some good feuds – Taz and Tommy Dreamer jumpstarted my career. And I give all credits to Dusty Rhodes for the matches I had with him.”

As ECW viewers remember, it was the feud with American Dream and wrestling legend Dusty Rhodes which really put Corino’s name on the marquee. Their bullrope match was, according to Corino, “… one of the best nights of my life. To go in there, working with a guy like Dusty, and for him to put on a match as good as he did… I owe him a lot.”

Corino admits that he was at first intimidated by facing off against the veteran. “But Dusty made me feel right at home.” In fact, Corino still maintains contact with Rhodes a couple of times a week. “He’s kind of like a father figure to me now.”

Credit should also go to Corino for putting on some great matches with Jerry Lynn. Anyone who watched their matches will remember the crimson mask of blood that covered his face. In person, the road map of scars on his forehead are reminders of those battles.

“We get hurt every night. It’s the guys like Tommy Dreamer, who even though he’s hurt tonight, wanted to go out and wrestle… it’s those guys who make this business great.”

Corino is very optimistic about the state of wrestling today, and believes its current wave of popularity will continue.

To that end, he’s still undecided as to the effects the internet has on the wrestling business. “I’m 50/50 on it right now. I do like official wrestler sites, and I like how information can get across.”

“What I don’t like is when someone tries to put their opinion up as fact. I think people should be forced to qualify their opinions, and not criticize wrestlers and matches to get their own opinions over. There’s lots of people who don’t know the ring psychology… you know, a match starts off hot, slows down, and ends with a high finish. Lots of people will just say ‘that match sucked… there was this dead spot in the middle’ without knowing what we were trying to do. People read that, and think it’s fact.”

“One of the most popular features on my site (www.stevecorino.com) is the commentary. And most of the time, it’s not even about wrestling. It’s what I did that week, what I think about this or that. It gives people a chance to see us as people, not the characters we play.”

In that regard, the “Old School Hero” character is fairly close to Corino’s own mentality of wrestling. “Wrestling is positive, fun, good versus evil, and good wins in the end. I like watching with my kid… because he sees what’s on TV, and he believes it. He believes that Kane and the Undertaker are brothers. Wrestling should be like a magic show. If you see the guy with the mask reveal the secret, then where’s the fun in watching the trick? I like the soap opera… I like the storylines.”

It’s an attitude and a gimmick that Corino hopes to carry on in ECW for a long time. Although he “…(doesn’t) have a clue” about any prospective TV deal for the promotion, Corino puts his faith in Paul Heyman, whom he calls a genius.

“For every guy like Tazz or Mike Awesome who leaves, there’s a new guy like CW Anderson or Justin Credible who comes in and runs with the ball. When Lance Storm left, Kid Kash came in. That’s the way it’s always been.”

“It’s not my job to worry. It’s my job to wrestle. And I don’t feel like I’ve even touched the surface of what I’m going to become.”