Having wrestled in several different countries and been able to adapt to their different styles, Lance Storm is truly a renaissance wrestler. Long before WCW took notice of his considerable skills while in ECW, Storm carved out a reputation for himself in the wrestling rings of Japan and Europe.

It was during a two and a half year stint with Japan’s WAR promotion that Storm and best friend Chris Jericho fine tuned their craft, competing with and against some of the top names in Japanese wrestling: Ultimo Dragon, Yuji Yasuraoka, Jushin “Thunder” Liger, El Samurai, Gedo.

Storm looks back fondly on his days working for WAR and promoter Genichiro Tenryu.

“Tenryu treated me great. He started me at what I thought was an extremely fair wage,” Storm told SLAM! Wrestling during an interview last Friday. “I got four or five raises over the two and half years I worked for him. He took really good care of me. He gave me a really good push. He ran things very professionally and treated me great. I had the time of my life working for Tenryu.”

Most North American wrestlers have a hard time wrestling in Japan. The reasons are obvious: a new culture, strange food, inability to speak the language, being away from one’s family. Surviving a single tour in Japan can be a real test of any wrestler’s resolve and character.

Storm was fortunate enough that Tenryu made things easier for him and the other foreign talent in WAR. Having wrestled himself in the U.S. during the ’70s and ’80s, Tenryu could identify with their situation.

“I think he knew what it was like to be on your own and having guys helping you out. He tried to go out of his way. He was a really good guy, too. He was someone I got to know fairly well and he’s just a decent, good guy. He rode on the same bus with us, shared the same locker room with him several times, he was just a good, down to earth guy and a great worker.”

“Yasuraoka was a lot of fun. He was really a nice kid. The hard part with him, tagging with me and doing the ‘IJ tag thing’ was sort of the company’s way of trying to step him up out of the ‘young boy’ status. And he had a really hard time not seeing himself as a ‘young boy’. He still did a lot of the chores that the young guys did. Like when we worked with Liger and Samurai, he was a bit star struck and therefore got eaten up a bit by Liger and Samurai. He didn’t have the confidence to just go out and take it. I think we really did some good stuff together.” 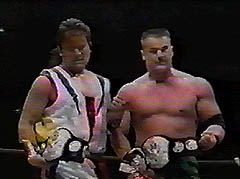 Storm counts the ‘Skydiving J’ as one of the biggest highlights of his career.

“New Japan ran an incredible show,” said Storm. “It was so professional and so well run. It was amazing. Budokan for the Skydiving J, I think, is still the biggest building, the biggest show I’ve ever been on. They treated you great. It was really impressive, I really had a ball working for New Japan.”

Among his many opponents in Japan, Storm says his favourite was the Ultimo Dragon.

“Dragon was always a lot of fun. He was really talented,” said Storm. “Unfortunately when I was working with him more, he was starting to get burned out because he was working full time in Mexico flying back and forth for every Japan tour. That’s why he originally wanted to go to WCW because he was just getting burned out from the travel. I don’t think I got him at his absolute peak and he was still amazing. He was a great guy, too, so he was a lot of fun to work with.”

“It was really neat the way I put a match together with him. He has the ability to really step guys up and make them look good. When it’s an interpromotional show, does he really want to make someone from the opposition look all that good? So he really didn’t contribute much, he would let you put the entire match all together, and if you could put together a five-star match, he’d have one with you.”

“But if you couldn’t, he’d go out there and have a two star match with you,” continued Storm. “Because all the Japanese press and everyone would know that if that match stunk it wasn’t Liger doing it. He wouldn’t make you but if you could make yourself he’d do anything you wanted. Shinjiro Ohtani was one of the few guys from New Japan that I felt really contributed and tried to bring more out of everybody.”

Storm’s time in Japan wasn’t without its hardships. He has less than complimentary words for Atsushi Onita and his FMW promotion when comparing it to WAR.

“That’s like comparing apples to rotten potatoes,” laughed Storm. “There’s a reason I only worked once for FMW. I hated working for that company. I felt poorly treated. Halfway through the tour, Onita came right up to Jericho and said ‘I love your work, I want you guys back five times next year, we’ll bring you back in January.’ This was in October. He called us in September. And Jericho went back and I said no I’m not going because I think that’s disrespectful. I didn’t want this guy to think he could just call me whenever he wants and I’m going to jump for him.”

Storm also says Onita shafted him on his pay.

“(Jericho and I) were told we were going to be paid a certain amount of money, we got paid less than that. And it was, not that we had to do it, but it is primarily a gigging-gimmick promotion that I didn’t care for. It was a great experience for how green I was, I had a good time because I had never been anywhere before but it was a Mickey Mouse company in my opinion. They paid the boys ridiculously low compared to other companies.”

And although Japan proved to be an incredible learning experience for him, Storm doesn’t ever envision going back to Japan full-time.

Turning his attention to his current run in WCW, Storm is quick to heap praise onto Johnny Ace. Ace, a former headliner with All Japan Pro Wrestling, is working behind the scenes at WCW, helping to flush out and tweak some of Vince Russo’s ideas.

“I think he adds one element that WCW has been missing over the last little while,” said Storm. “You can have all the storylines you want but if you don’t have a wrestling match that makes sense somewhere along there to be the basis to shoot off all these angles you’re sort of missing something. I think his knowledge of wrestling, and the drama of all the finishes he adds is just helped taken things off.”

Ace has also layed out several of Storm’s matches and in part is responsible for him being so over.

“A lot of the positive feedback with my match with Booker T: ‘Oh, it’s great. The drama and the intensity was so great, you guys are so great.’ And it’s like, okay, thank you but Johnny Ace put a lot of that together, a lot of that is him. He’s done a lot of the stuff that I’ve done so far; it’s been him.”

“I think all the credit that people are giving me, ‘ooh you’re great, you’re bringing wrestling back’ and everything else, it’s like thank you, I’m doing my part but I’m not doing that alone. I think a lot of that is Johnny Ace. A lot of the finishes I do are booked by him, which helps. He was actually adamant (before that Booker T match) that nobody would get out of my hold for several months in order establish it.”

Just as Storm is in the midst of the biggest push of his career, so is best friend and former Thrillseekers tag team partner Chris Jericho. Even though they are in competing organizations, Storm and Jericho remain very close.

“I talk to him every couple of weeks, usually via e-mail because we’re both sort of on the road different places all the time. He’s not doing too bad. (laughs) I always joke about whenever anybody brings up the Thrillseekers, ;You know I carried him, since I left his career has gone down the toilet.’ He seems to gel really well with Hunter and he loves working with the guy so he’s having the time of his life.”

Storm went to Winnipeg recently were he attended Jericho’s wedding.

“It was really, really nice,” said Storm. “It was outdoors, it was just beautiful weather. It was great to see so many of the people that I hadn’t seen in a while. It was just really nice to be part of for Chris and it was a lot of fun.”

While leaving ECW was hard for Storm, he has no regrets about the decision he made.

“I’ve been treated great since I’ve left. I miss some people. I still keep in contact with most of them. Actually I just spoke to Paul (Heyman) the other day. I hope they get a TV deal worked out for the fall and I hope they thrive. I wouldn’t rule out the possibility of going back some day but as of right now I’m really happy the way things have worked out so I can’t complain.”

Looking beyond his career as an active wrestler, Storm has aspirations of being a booker.

“I love the creative end of it. I would certainly do that if the opportunity presented itself. I enjoy teaching too, the two years that I helped train at the Hart camp. I loved that. I could see myself either running a camp or booking if those options presented itself. I’d love to be in Johnny Ace’s shoes in about seven to ten years.”

A husband and a father of two young girls, Storm feels he is able to successfully balance his career and family.

“My youngest (daughter), it’s not hard on because she’s too young,” explained Storm. “She’s only five months old so she doesn’t register. My oldest daughter she starts to complain more as I leave. I try to make an effort that when I do get home to really spend time with her, just doing stuff. I think on the whole I spend as much or more time with my daughters than a lot of other people do. It’s just in big chunks. It’s hard but she copes with it fairly well.”

As a parent, Storm is increasingly concerned about the level of sex and violence in today’s wrestling. As a result, he monitors his daughter’s viewing of it.

“She doesn’t actually watch it at all now. She used to see it occasionally, and if it’s just a wrestling match, she understands that what we do on TV is not real. If a match starts getting involved with sticks or chairs and tables, I don’t let her watch that. I don’t want her to start thinking that that’s okay. I certainly would be quite happy if she didn’t watch wrestling until she was much, much older.”