It’s 48 hours away from WCW’s New Blood Rising show, the biggest night in Lance Storm’s wrestling career, and the Calgary native is resting quietly at home.

Other wrestlers in a similar position would no doubt be frantically nervous, stumbling over their words when pressed for answers by a journalist.

Not Lance Storm. The mild-mannered star has a reputation for being among the most articulate, engaging personalities in wrestling. This evening is no exception. The eloquent, soft-spoken Storm exudes a quiet confidence as he reflects on what is the biggest push of his career.

“It’s amazing. When you first jump to a new company you’re a little 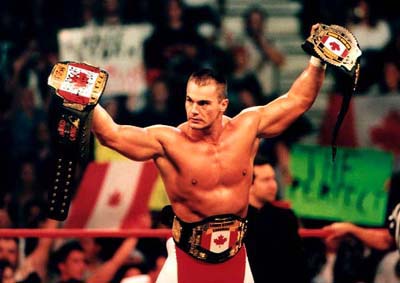 trepidatious, you’re a little unsure of what they’re going to do with you,” laughed Storm over the phone during an interview with SLAM! Wrestling last Friday. “Especially with the nature of wrestling because you can be buried regardless of how good you are. But they’ve made me feel very welcome when I first met with them and talked with them.”

What’s also amazing is that Storm’s mic skills are as much a factor for his new-found success as is his polished ring-work.

“I’m a little surprised (the promos) have gotten over so well. I think it bodes well for the character and the whole Canadian thing and everything else,” admitted Storm. “It’s like it’s almost another thing for (the fans) to resent me for (because) I’m well spoken and articulate. He’s a serious character who knows what he’s talking about and there’s some truth to it, which sort of eats at people to the core a little bit.”

Storm’s interviews are compelling because he doesn’t deliver the stereotypical wrestling interview. He doesn’t shout at the top of his lungs, waving his fist. Instead, in a calm and intelligible tone, Storm speaks directly into the camera with a clarity and resonance that’s reminiscent of Nick Bockwinkel’s old interviews.

Storm is like that in real life. It’s who he is. And it’s why he’s able to deliver the most unique promos in wrestling today.

“I think if you try to make people do things that aren’t them it doesn’t work,” said Storm. “The Ric Flair promo is a great promo but not everybody can do Ric Flair. So, I think you have to find what you’re good at and what you’re comfortable with and just go with that.”

“When I first went in and talked to Bill Banks who oversees a little what I do with my promo work and so forth, he said it’s different than what other people do and it seems to be what you’re more comfortable with so let’s stay with it and it’s worked.”

Storm has been given a great deal of freedom by Vince Russo and Banks with his interviews.

“Sometimes there will be something they want me to get in, like the ‘Can I be serious for a minute’ line. That was something I just did on my own so I thought that would be kind of ironic because I’m serious all the time. When I did it Russo popped for it and so he specifically wants me to use that now. The first time (I did a promo) he said we want you to be serious, don’t yell and scream just hit your points and speak the way you do. He told me to stay with that and other than that they’ve pretty much given me free reign.”

Contrary to rumours on the Internet, there is no heat among his co-wrokers over the anti-American sentiments that Storm uses during his promos.

“They realize it’s a gimmick. I’m far from somebody who hates one country over everything else. I’m Canadian, I’m proud of that but there’s nothing wrong with that. I’m certainly not that serious in the locker room so there might be some resentment as per the amount of push I get or so forth. I don’t see it but I would imagine it’s there somewhere.”

Although there might be some underlying resentment, the feedback he’s received from management and others in the locker room has been very positive.

“I get (positive feedback) from the office staff or the booking staff and everything else. From Vince Russo, Ed Ferrera, Johnny Ace, the agents and so forth…. I get a lot of good positive feedback from them. The (guys in the locker room) I get along with really well. They’re all when you come back ‘that was a really good match’ and stuff. The atmosphere has been really good.”

Storm also says that despite reports to the contrary, the morale in WCW is the best it’s been in a long time.

“The locker room that I share is really quite good,” explained Storm. “I think these shows have been, with possibly one or two exceptions, really strong lately. People have been proud of that and feeling that things are going in the right direction. I think ticket sales were up considerably for Vancouver and if the buyrate goes up a bit people will continue to feel that things are coming around and things are improving. I think morale has picked up and it’s been really positive since I’ve been here.”

Storm hasn’t been put off by anything WCW has done with the pro-Canadian angle as of yet, but does worry about issues concerning the flags of both countries.

“I’ve been fairly comfortable with everything they’ve done. Whenever they start using the flags I sort of sit back and (worry) because I think that touches home a little bit too much. Grabbing the flag and covering Mike Awesome with it or hitting somebody with it, you start wondering if the fans will take this a little too seriously and I’ll go out and have my tires flattened on my rental car. They haven’t done anything tasteless that’s concerned me.”

Storm did have initial concerns about winning the WCW Hardcore title and renaming it the Saskatchewan Hardcore International (S.H.I.T.) title.

“When I was told about it I sort of voiced my opinion and said do we really want to demean it by using the name. I was unsure of it. They said they thought it was funny and that maybe I didn’t realize it, it was just an oversight on my part being so serious that I didn’t even realize it. I said ‘well, if that’s what you want to do’, it’s certainly their call and I don’t have a problem with it.”

Looking back, Storm thinks it turned out for the better.

“Actually, now the whole Saskatchewan name has really caught on, they’ve gotten a lot of positive feedback about using Saskatchewan, so it worked out really well. I didn’t see the humour in it at first and obviously they knew more than I did because it’s worked and I’ve got a lot of feedback for it. It was a good idea, it was theirs and we ended up going with it.”

WCW haven’t disclosed their plans for Lance coming out of this past Sunday’s pay-per-view, where he kept the Canadian title against Mike Awesome.

“They really haven’t said anything. I don’t ask for it and they don’t offer because stuff changes so much. I’d rather deal with it week by week. I think there’s a lot of places I can go because I find myself very diverse, I think that’s why I’m going to be a big asset. They can put in there with Vito for the Hardcore title, Mike Awesome for the U.S. title, I can even work with Chavo and Juvie and those guys for the Crusierweight title even though, technically, I’m a little bit to big for that group.”

“I really think there’s a lot of places I can go,” continued Storm. “I think with my character what they’re doing right now I don’t need one specific opponent. I can just be the really arrogant, annoying Canadian that people just want to see beat and you can send anybody and any of the titles and do whatever you want with it. I think they’ve got a lot of legs on whichever way they want to go.”

Looking beyond his program with Mike Awesome, he does have some thoughts as to who he’d like to work with next.