It’s no mistake that the cover of The Rock’s latest WWF Home Video release – The People’s Champ – shows him with a mic in hand instead of an action shot of him battling someone in the ring.

That should tell you something. 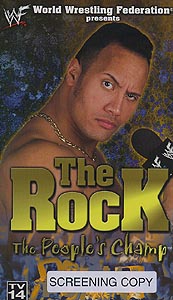 The Rock (Dwayne Johnson) is arguably the most charismatic personality in wrestling. He’s got the look. He’s got the attitude and more importantly in this phase of sports entertainment where the “entertainment” aspect has the “sports” portion pinned to the mat, he is king…for now. In many ways, The Rock (for good or bad, depending on your outlook) set the trend that has everyone else following in his footsteps.

Sweeping his previous incarnation as the babyfaced Rocky Maivia and his rise to notoriety in the Nation Of Domination gang under the carpet, the WWF has put The Rock’s best moments on one ninety-minute video. The People’s Champ has the longest running time of any recent WWF non pay-per-view video release. They usually clock in at about 45 minutes or so. The tape itself begins its look at The Rock by detailing his previous feud with Hunter-Hearst Helmsley and carries on right through to Rocky teaming up with Mankind to form the popular Rock And Sock Connection tag team combination.

It is no surprise that The Rock’s matches themselves have been edited down into highlight reels while his promos are kept intact. Does anyone remember when wrestling tapes had actual full-length matches on them? Does anyone remember that those said matches were never-seen-before dark matches rather than stuff spliced from the weekly wrestling shows that we’ve already seen for free on television? Ah, those were the days.

Those who’ve read The Great One’s autobiography will get a kick out of the cross references. We visit The Great One’s barber – who did more for The Rock’s career than simply give him a groovy hairstyle, the clothing store where he buys those loud shirts that put Magnum P.I.‘s to shame and there’s some mention of his background but it isn’t as detailed as the info you’d find in his book.

If you like The Rock and what he does, you will be ever grateful that your favorite bits have been collected on one cassette. If you see The Rock as a modern version of Hulk Hogan full of hot air and nothing more, The People’s Champ won’t change your opinion.

A televised New Year’s Eve special that aired last year, Eve Of Destruction is a Best Of compilation tape with a twist. Since we here in Canada didn’t 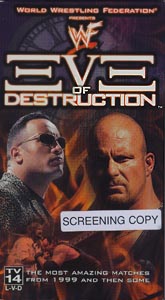 get the original   broadcast, there is no way for me to tell whether it’s the same thing or not. That notwithstanding, what the WWF has done with Eve Of Destruction is gather up those Sunday Night Heat filler segments and strung them together. Portions of previously aired matches are shown. The footage is supplemented by running commentary of the participants involved. That’s a great idea if the remarks were a shoot. That is, the wrestlers giving the straight dope on how they really worked the match. That’s not the case with the bulk of Eve Of Destruction. Excluding The Hardy Boys – Edge, Christian ladder match at the end, everyone else talks in character and as if the bouts weren’t planned out beforehand. To today’s enlightened wrestling fan, that’s insulting. Why the WWF would choose that format in this day and age is puzzling. It could’ve been something special giving fans an insight into the wrestler’s true thoughts and feelings. What they had to go through to entertain us. As it stands, Eve Of Destruction squandered that opportunity.

If you missed this edition of Biography on the Arts And Entertainment channel, the WWF has done you a huge favour. Broadcast during a special wrestling week on the network, A&E’s profile on Mick Foley is a must-see and a must-have. Expanding upon Foley’s acclaimed autobiography, this extensive look at the hardcore wrestling icon includes interviews with Foley’s parents, his fellow grapplers, wrestling journalists, Vince McMahon and even Foley, himself.